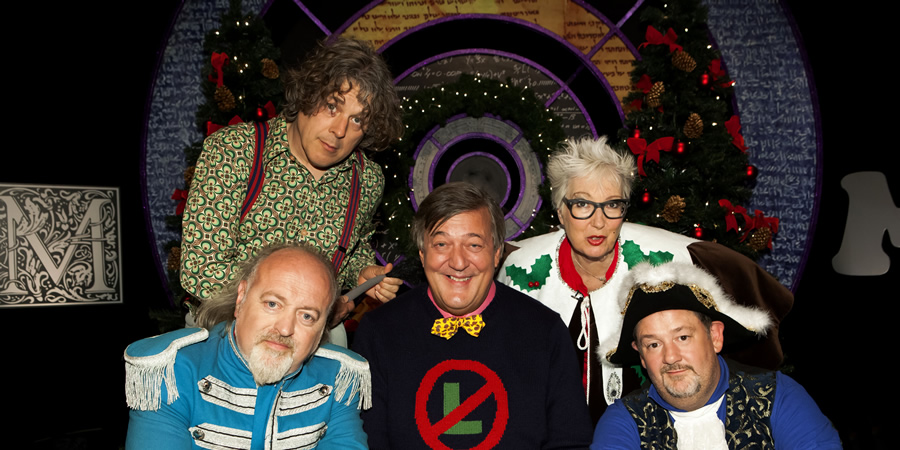 - Each of the panel are given a Christmas card and are asked which of their cards is the most similar to the very first Christmas card sent. Jenny's card features a Roman statue in a Christmas jumper; Johnny's card features a baby drinking champagne; Bill's card features a robin; and Alan's card features a poster for a 1916 production of the pantomime Puss in Boots, depicting an actor who has a remarkable likeness to Alan. The card most like the first ever Christmas card is Johnny's, as the first card depicts a family, including a baby, toasting. The card was designed by John Callcott Horsley of the Royal Academy, and also depicts charitable acts such as feeding the poor and clothing the naked. The origins of robins on cards dates back to when postmen had red-breasted uniforms and thus were nicknamed "robins". The reason for the statue in the jumper is because the Romans invented novelty jumpers for Saturnalia. Correction: Robins on Christmas cards do not represnt postmen as robins appeared on cards before postmen had red-breasted uniforms. This error was correcting in Series O, Episode 9: "O Christmas".

- QI has been broadcasting a message ever since it began which no-one has ever spotted. The theme tune is written in Morse code, which when translated reads as the web address www.alan0andstephenhero.com which contains a special bonus video. The theme is written by Howard Goodall (who also wrote the themes for Blackadder and The Vicar of Dibley), and his colleague Simon Nathan decoded the message, who is in the audience. Other TV shows with Morse code hidden in their music include detective series Morse, where composer Barrington Pheloung hid the names of the murderers in the score; and the theme for Some Mothers Do 'Ave 'Em which has the title of the show spelt out in Morse code on a piccolo. There is a building in Hollywood which gives out Morse code as well. The top of the Capitol Records building has a light which flashes out the word "Hollywood" constantly. However, it was changed in 2013 to announce Katy Perry's new album Prism and the release date. No-one noticed it.

- Tangent: As the panel talk about the theme tune code a light suddenly explodes. Recording had to be stopped while it was replaced.

- Tangent: As well as inventing Morse code, Samuel Morse was an expert copyist of paintings, so he painted a picture 6ft by 9ft of the most famous exhibits in the Louvre, so people did who could not afford to go to Paris could see the paintings.

- Tangent: While Stephen is talking about Samuel Morse a fly lands of Bill's hand, which Alan swats and kills.

- The panel are asked to describe the plot of, or to sing a song from, the musical The Bathrooms Are Coming. While the panel are able to improvise their own songs with Bill playing on a keyboard, none of them are able to give a correct answer. The Bathrooms Are Coming was a musical written for the American Standard bathroom company by a Broadway composer. It is an example of an industrial musical, which were popular between 1950 and 1980, which were written for conventions for various companies in the USA, not for the general public. Other industrial musicals include The Sound of Selling, B. F. Goodrich's 1966 Sales Meeting and The Saga of the Dingbat. Around 1955 the USA produced two-thirds of the world's goods.

- XL: The panel are given some lines from the musical and have to guess the company they were made for.

-XL: The music that cats like best is music that is made especially for them. Cat music features bird, mouse and cat noises. Younger cats react to the music more than middle-aged cats. Some cats like the music so much they rub their faces against speakers. The composer of the music is working with the Smithsonian National Zoo to make music for cotton-top tamarins, which normally prefer silence to music.

- XL Tangent: Johnny asks if it is true that cats only meow to humans, not to other cats.

- The panel are all given some ice cream, and are asked (repeatedly and increasingly louder by Stephen as the rest of the panel argue over the ice creams they got) what the biggest nuisance in Victorian theatre was. The answer is going to the toilet - namely the one and only toilet in the entire theatre. In 1837 the Theatre Royal, Newcastle, installed lead lining on the floor of the balcony because urine was dropping down onto the people in the stalls, because people urinated where they sat because there was nowhere else to go. Intervals then helped to promote the installation of more toilets, with the shows taking into account of "Broadway Bladders", which is reportedly 75 minutes long.

- Tangent: Films which had intermissions include Zulu, The Godfather, The Sound of Music. Alfred Hitchcock said: "The length of a film should be directly related to the endurance of the human bladder."

- XL Tangent: The one Stephen remembers the most from his childhood featured a car going towards a cliff, falls off, goes down the cliff face, then it cuts to the intermission, and when it returns the car continues to fall before it eventually begins flying, because the car was "Chitty Chitty Bang Bang".

- XL: The worst person to sit next to in a silent movie is someone who reads the captions out aloud. This was named at the time of the silent movie era as the most annoying thing you could do. The theatres would also post images giving instructions to patrons on how to behave during the film, with captions telling people that loud talking and whistling was not allowed, telling them to applaud with hands only, and to take off large hats that would block the view of the people sitting behind you.

- XL Tangent: Bill says it is great watching films in America, New York especially, because the audience get involved and shout along. Bill went to see The Lord of the Rings and the during the fight scenes the audience were shouting out things like: "Kick that orc's ass!"

- XL Tangent: The "spoiler paradox" states that you are more likely to enjoy a film if you know what is happening.

- XL: If you imagine it is a moonlit Christmas night in the city and you can see fine, if the moon were to suddenly go behind a cloud it would suddenly become brighter, because the clouds reflect the street light. This happens in both urban and rural areas. The brightest place is Schipluiden, The Netherlands, where they have greenhouses with strong lights in them that are used for growing tomatoes. The sky is 10,000 times bright than the darkest night sky.

- XL: The boys in the NYPD choir do not sing anything, as there is no NYPD choir. When the Pogues made the video for "Fairytale of New York" the band that appear are the pipe band of the New York Police Department, but they did not know the song "Galway Way", so they actual sang "The Mickey Mouse Club" and the footage of them singing was slowed down to fit the words. (Forfeit: Galway Bay)

- XL Tangent: The Pogues get their name from the Irish phrase: "Pog mo thoin", which means: "Kiss my arse". Johnny once went out with Shane MacGowan drinking, during which Johnny fell amd damaged his thumb, which he can now no longer bend properly.

- In Britain the bank holiday it is most likely to snow on is Easter Monday. The average amount of snowy days in December is 3.9 and for March is 4.2.

- Tangent: Jenny once talked to a man who had an open-top sports car who told her that there only about six days a year in which you can put the roof down in your open-top car because of the weather in Britain. The British own more convertibles per capita than any other European country.

- No-one can give a line from the world's first pantomime because they were silent. They were mimes in Roman plays who represented mythological creatures. (Forfeit: He's behind you)

The XL version of this episode was broadcast first.

The show grinds to halt after a light bulb explodes above the set.