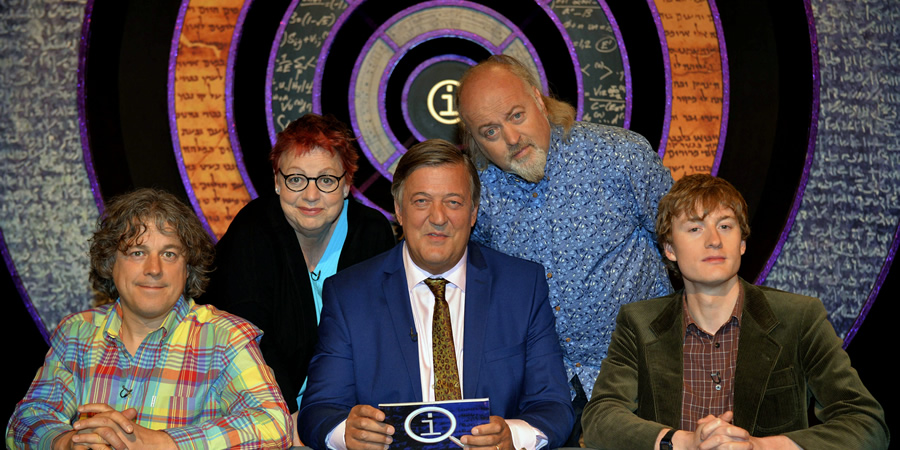 - This is a "General" show from Series M, covering a wide range of different topics beginning with "M".

- The panel are shown some pictures of things and are asked which of the pictures features something that contains metal. The pictures are of Alan, a star, a monkey, some coins, a balloon and a mushroom. The answer is that all six of them contain metals. According to astronomers, any element that was not created at the moment of the Big Bang, namely anything that is not hydrogen and helium (the two most abundant elements in the universe) is a metal, even though the first two elements created after hydrogen and helium, namely lithium and beryllium, were both in the form of gases. These elements were created by fusion in the stars.

- Tangent: A human body contains enough iron to make a nail. You would need to extract the gold from 40,000 humans in order to get enough gold to make a single gold coin. Humans contain 48 different metals.

- Tangent: The panel joke that Lemmy from Motorhead is made out of heavy metal. Other forms of metal music include death metal, thrash metal and nu metal (which combines rap and metal). Stephen was told of a form of music which combines techno and disco, which is called Tesco.

- Magic Trick: Stephen takes out a glass of water and a metal teaspoon. He covers the glass with his hand as he stirs the water, and when he takes his hand away the spoon has disappeared. Stephen says that this is not really a magic trick, and reveals that the spoon is made out of gallium. When the water is warm the gallium melts. The panel are given their own glasses of water and gallium teaspoons to perform the trick themselves.

- XL Tangent: Gallium was discovered in the 19th century by a Frenchman called Lecoq. The name partly comes from "Gaul", and partly from the French for cockerel which is "gallus", so he also named it after himself.

- XL: The world's richest man used wide trousers award his generals. King Mansa Musa I of Mali was the richest person in all of history due to him having so much gold. He reigned in the 14th century and was a devote Muslim. When he went on the Hajj to Mecca, every Friday he stopped and built a mosque, and also gave gold to everyone he met. However, by the time everyone cashed in their gold, it destroyed the market and caused hyperinflation. Mansa Musa tries to put everything right by buying back all the gold, but it still destroyed the entire Mediterranean economy for ten years. Mansa Musa also had an army of 100,000 soldiers, and would award successful generals with wide trousers. On the way back from his Hajj, Mansa Musa founded his great city: Timbuktu.

- XL: The panel are shown a picture of a mushroom and are asked what sex it is. The answer is that it does not have one. Mushrooms are neither male nor female. They reproduce using spores. (Forfeit: Female; Male)

- XL Tangent: The stinkhorn mushroom, known as "phallus impudicus" (shameless cock), gives off a form of mucus, which stinks of rotten meat and attracts flies for the purposes of spreading its spores. The Chinese eat stinkhorns because they believe they are an aphrodisiac (they are not).

- You would spread mustard on your lawn in order to count worms. It drives the worms to the surface, although the mustard also does irritate them. You can also, has Jo has done in the past, use washing-up liquid to drive worms to the surface, but this will also kill the worms. The mustard test was done in the USA and it was found that all worms in North America are non-native, which meant that the worms that were native were all killed during the Ice Age.

- Tangent: A friend of Bill's tried to cover his hands with mustard in order to stop him smoking. This didn't work.

- Tangent: There is no mustard in mustard gas. It gets its name from the fact that it smells of mustard and has the colour of mustard.

- Tangent: According to the National Museum of Mustard in Middleton, Wisconsin, asserts that, "bathing in mustard is an English custom to this very day." Britain also has a mustard museum in Norwich, where Coleman's mustard is based. Coleman's supplied Captain Scott's discovery expedition with 1.5 tonnes of mustard between 1901 and 1902.

- There are several jobs that even a monkey can do. In Thailand pig-tailed macaques go through 3-6 months training to pick coconuts. They can pick between 800 and 1,000 coconuts a day. In the USA capuchin monkeys are used by a charity called Helping Hands to help disabled people. These monkeys help with feeding, retrieving dropped items, changing CDs and switching lights on and off. In Tokyo there is a traditional sake house where macaques are employed to give customers hot towels.

- XL Tangent: Rik Mayall used to tell a joke whenever he went into a Japanese restaurant, which he would say: "Waiter! Bring me several types of Japanese wine, and don't get all sake!"

- Out of chocolate, chillies, peppers, mushrooms, monkeys and a cactus, an ancient Mexican would use the cactus and the chillies to teach children manners. The Mexica, also known as the Aztecs, had the Codex Mendoza which records how children were disciplined. It starts with an eight-year-old boy being threatened with the spines of a cactus; the next year he is stripped, bound and pierced in his neck, side and thigh; the year after that he is bound and beaten with a pine stick; the year after this his father holds his son bound and weeping over a fire of burning chilies; lastly, aged 12, the boy is bound and dumped in a damp vegetable patch for a day to reflect on his conduct. By the time he is 13 is his dutifully gathering reeds.

- Tangent: The Huichol Mexicans had a practice where if a woman was pregnant she would lie down, and in the room above her husband would lie down, with strings attached to his testicles, that would drop down into the room below. Whenever the woman had a contract she would pull the strings so her husband felt the pain of childbirth as well as herself.

- Tangent: Bill had a dog that got into his bed and started to lick "the wrong set of testicles". James says that because of this, he has never been back.

- The panel are shown a photo of a man at a computer, where only one hand is visible, and are asked what he is doing with his other hand. The answer is that his hand is in a box full of mosquitos which are feeding on his blood. The man in question, Prof. Grayson Brown from the University of Kentucky, is a culicidologist, an expert on mosquitos, and thus allows 1,000 mosquitos to feed on him while he works. Asian mosquitos only feast in humans, so Prof. Brown and his fellow works provide their own blood to keep them alive. Other animals are also kept in his lab so that other species of mosquito can be fed. Scientists get Asian mosquitos mate by decapitating the male, anaesthetising the female, and inserting the male's genitals into the female. The two lock and the sperm is transferred. Skilled entomologists can do this without a microscope.

- Tangent: Bill once had a pair of praying mantises in a tank in his kitchen. One night he found that the male praying mantis has escape from its tank. Bill put the male back in the tank, and the female killed it because they had just mated.

- XL: The world's oldest complaint is by a Babylonian copper merchant named Nanni. In a tablet now in the British Museum, the merchant wrote to his supplier Ea-nasir complaining about the late shipment of some copper ore, that was damaged and of an inferior grade. Nanni wrote: "You have put ingots which were not good enough before my messenger, and said: 'If you want to take them, take them. If you do not want to take them, go away.' What do you take me for, that you treat me with such contempt? You alone treat me messenger with contempt. You have withheld my money bag from me in enemy territory. It's now up to you to restore my money to me in full." We do not have the reply.

- XL: The musk ox is a type of goat, noted for its thick coat. They are so good at surviving at low temperatures that they managed to live through the ice age. (Forfeit: An ox; Musk)

- XL Tangent: Bill says that male musk oxen rut each other with their horns, "mano-a-mano"" but Alan says that this means "hand-to-hand".

- Magpies are not attracted to anything shiny. A study of 64 magpies shows that they only picked up shiny objects twice, and then they immediately dropped it. The Italian for "magpie" is "gazza", and a little magpie is "gazzetta", which is where we get the word "gazette" from. The "mag" in "magpie" comes from "Margaret", because in Medieval England it was common to give birds a Christian name, so they were called a "Mag Pie". Other examples of this include robin redbreast, tomtit, jenny wren and jackdaw. (Forfeit: Shiny things)

- Tangent: Alan found an injured bird, possibly a crow, in his garden that could not take off. Alan didn't know what to do with it, so he opened his back gate and shooed the bird out. Jo thinks the name of the bird was Vel, as in Velcro.

- Vincent Van Gogh sold hundreds of paintings in his life time, because when he was 15 he used to work in an art gallery. He therefore sold lots of other people's paintings, in comparison to the one painting that he sold that was actually painted by himself. Vincent's brother Theo ran the Montmartre branch of a large French company that sold paintings. Then Vincent moved to the company's London branch where he lived for two years in Brixton. Vincent said that these two years were the happiest time of his life. He then left the UK, and then returned to the country again in 1876 where he worked as a supply teacher in Ramsgate. After this he became a painted, supported financially by Theo, later suffered from tinnitus, vertigo and depression, before killing himself aged 37. Only one of Vincent's 900 paintings was sold in his lifetime, which was sold to painter Anna Boch. She paid 400 francs for The Red Vineyard. (Forfeit: None; One)

Stephen Fry demonstrates how to make a spoon melt in water.