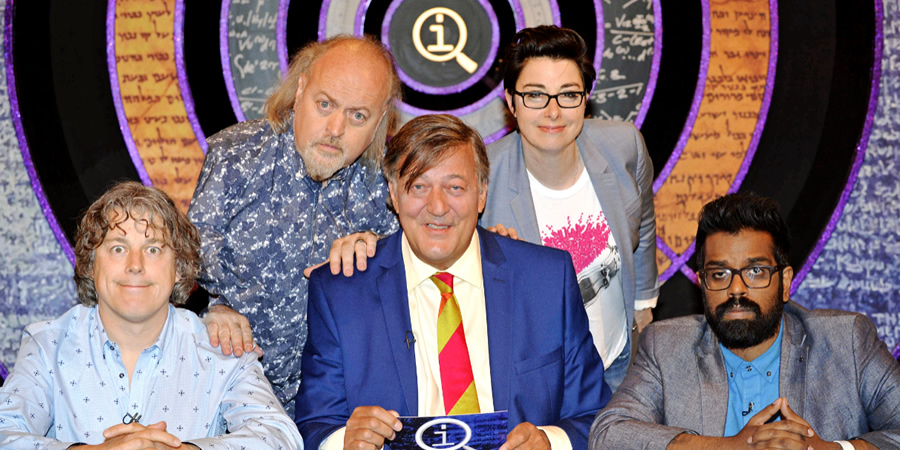 - The panel try to do an impression of a moose on the pull. The correct way to do it is when the male moose are rutting they dig a hole, urinate into the hole, pull out the "pissy mud" so it covers their legs and bodies, walk a little bit away from the hole, sit down, and the females find this attractive. Before this however the male moose fight each other with their antlers.

- Tangent: Alan was once staying a cabin in Canada. He woke up in the morning, looked out the window, a moose was standing right outside. Alan claims moose is almost entirely silent.

- XL Tangent: Moose can more each eye independently. Stephen is also able to do this. While in English the plural of "moose" is just "moose", the word actually comes from the Cree language who pluralise it as "moosuch".

- XL: A tiger might help an old deer get home as it would help find the deer's original habitat. The milu was a deer that was native to China, but has been extinct in the wild for 1,200 years because the Chinese thought that their antlers were an aphrodisiac. However, some milu were saved by Europeans, including the 11th Duke of Bedford who put them in a park in Woburn Abbey. In 1985 there was a plan to reintroduce milu to China, but there is no record of which part of China they came from. They knew milu liked marsh grounds, but then they decided to find out which animals the milu had an atavistic memory of. They therefore played recording of various animals and the one the milu reacted to was tigers. An area of China was found where there was a large number of tiger fossils, because there are almost no tigers alive in China because the Chinese think tiger penises are an aphrodisiac, and the milu were sent there.

- XL Tangent: Bill worries that if he mention's zebra crossings he would ring the klaxon, but it turns out that he doesn't, so Bill celebrates claiming that he fooled the klaxon.

- XL Tangent: Stephen asks Romesh, a former maths teacher, to divide 355 by 113, but he says he can't. The number in question is called "milu", and it is a Chinese approximation of pi. It is not as accurate to as many places, with the number displayed going up to 3.15159, but it is easy to remember. If you put 113 in front then you have the first three odd numbered in pairs - 113355. Stephen says it is proven because the screen shows the number written in chalk. Romesh however did not use chalk as a teacher. He used interactive whiteboards, but as they take so long to plan them that he just turned it off and used it as a regular whiteboard. When Romesh was a pupil he remembered having whiteboard rubbers thrown at people to discipline them. In Stephen's day they threw blackboard rubbers that drew blood. In his teaching days Romesh has trouble with a student who would not behave, so he called in the parents, and the father asked why Romesh didn't just hit the student. Romesh told him that he could not do that, so the father asked that if they gave Romesh a letter granting him permission to hit the student could he do it then.

- The world's most dangerous moustache is on the moustachioed toad, also known as the emei. They have sharp horns on their upper lips so the males fight each other during mating season. Native to China, during the mating season the toads build up their forearms, grown their moustache, and fight a male rival at the bottom of a river stream by trying to rip off each other's stomachs. 90% of toads involved in this combat get injured. The horns are shed when after the female's eggs are hatched.

- XL Tangent: Romesh asks whether all moustaches and beards are dangerous because supposedly they carry lots of germs. He has therefore taken to wash his beard with elderberry shampoo, and then using a mango and vanilla oil post-shower. After this Sue asks about whether Stephen was talk moustaches, to which he claims that it was Romesh making the claim, before realising that Sue was actually referring to the original question.

- XL Tangent: Other moustachioed animals include the Leucauge mariana female spider. This spider prefers males with hairy fronts. If the male tickles the female with its whiskers then it is more likely to continue mating and produce a genital plug to make sure that it is their genetic material the female accepts and not that of any other male. Experts tested the moustaches by shaving them off, and the ones who were shaven were less successful when mating. Another spider with a moustache is the brown huntsman, which has a luminous moustache used to attract moths, which it eats.

- You would want to shave the monkey in order to get rid of them. The langur is a monkey so common in India that they are considered a pest, but because they considered sacred to the Hindus (Lord Hanuman in the Hindu monkey god) they cannot be killed. In order to get rid of them the alpha male is shaved and this puts the rest of the group off him, so they go away. While langurs are fine in the wild, when they are with humans they pull their hair and they bite people. In 2001 several large langurs were employed by the Indian government. They were paid in bananas to police the defence centre where rhesus macaques were stealing food and paperwork, as well as pulling women's saris off.

- Tangent: In Cape Town baboons are considered a pest. They have to be monitored because it is against the law to shoot them.

- XL: The panel are shown a picture of a macaque giving a toothy grin to camera. It is in fact a very famous photograph as the macaque in Indonesia took a selfie. This photo resulted in a legal debate as to who owned the copyright to the picture: the macaque, or British photographer David Slater who set up the equipment. A US Copyright Office ruled that for an image to be copyrightable a work must owe its origin to a human being. While the macaque took the picture, Slater set everything up and all the macaque did was press the button that took the photo. Therefore the image is supposedly uncopyrightable, but QI has decided to pay for the rights to use to photograph.

- The way to titillate a tree ocelot is not to oscillate its tits a lot. Better known as a margay, they are almost unique among cats for being able to climb both up and down trees headfirst, which they do by rotating their ankles 180 degrees. The only other cat to do this is the cloud leopard. Native to Central and South America, margays can imitate the calls of wild monkeys.

- XL Tangent: In London, in 2012, animals had to be freed from trees once every 14 hours. Half of them were cats, but other freed animals included a chimpanzee trapped in a chimney in Tower Hamlets, a puppy whose head was stuck in an exercise machine in Hillingdon, and a kitten with its head stuck in a bongo drum in a flat.

- The panel are given a map of the world and are asked to draw the annual migration of the North American blue grouse. The route is actually very small: it is 300 yards. It goes down to its breeding grounds every spring, then in the autumn it walks back uphill. The word for the uncontrollable urge to migrate is "zugunruhe", which is German for "movement and restlessness".

- Tangent: On his map Alan draws a cock and balls which he keeps trying to show to Bill.

- A marsh warbler goes to other birds for singing lessons. The parents stop singing before a baby marsh warbler is hatched, so instead it imitates the calls of other birds. They can learn 31 European and 45 African bird calls. Thus you can never tell a bird is a marsh warbler just by the call.

- Tangent: The panel are played the bird call of the morepork, also known as the Tasmanian owl. Other birds beginning with "M" include the monotonous lark, although Bill jokes that a monotonous lark is a narrow boat holiday, as he went on one in which he drove the boat while everyone else was drinking wine down below for three days. Another "M" bird is the marabou stork, which is said to be the ugliest bird in the world. It squirts its excrement onto its legs so at first the legs are black, and then they turn white when it dries. It also eats just about any creature, living or dead, and also eats faeces, scraps, carrion and rubbish including shoes and pieces of metal. Romesh compares the marabou stork's appearance to Mr. Burns from The Simpsons.

- Tangent: While Stephen is talking Alan manages to make Bill laugh at his cock and ball map drawing.

- A mosquito goes to the Arctic to concentrate, in the sense that the Arctic has the greatest swarm concentration of mosquitos in the world. This happens mainly in Alaska and Manitoba. Standing pools of water are ideal breeding grounds for them. (Forfeit: The library; Africa)

- A question about macropods: the number of legs a kangaroo has is five. The tail not only counts as a leg, but it is the strongest of their limbs. Simon Fraser University in Burnaby, Canada, found that red kangaroos put their front pegs on the ground and move their back legs forwards, and at the same time their push their tail onto the floor and use it to propel themselves forward. The force from the tail is as great as the force of the other four legs combined. A kangaroo would cope fine if you cut off any of its other legs, but if you cut of the tail it would have trouble moving around. (Forfeit: Two)

- Tangent: Alan's favourite part in the movie Toy Story is when the toy dinosaur sees something scary and asks for someone to covers his eyes, because his arms are too small.

Moose on the pull

The panel discuss how a moose finds a mate.