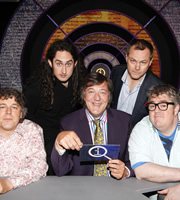 - This is the "General" show in Series H, covering a wide range of different topics beginning with "H".

- Forfeit: When Alan pressed his buzzer at the beginning the klaxon sounded and he lost 10 points.

- Bankers like long-haired men and women in short skirts because there is a direct correlation between them and the increase in stock prices during the 20th century. Whenever women have worn short skirts there has been a boom and whenever women have worn long skirts there has been a bust or a recession. This is known as "hemline theory". Similarly there is a negative correlation between longer-haired men and the stock market (the longer the hair, the better the stock market).

- XL Tangent: During a boom people buy more perishable foods and during a bust more people buy food that lasts a longer time.

- The thing that starts with "H" and means you will always be the bridesmaid and never the bride is 'halitosis'. However, it does not actually exist. It was invented by Lambert Pharmacia, the makers of Listerine, so that they could sell mouthwash. Listerine, which is named after Joseph Lister, inventor of antiseptics, was originally sold as an antiseptic, but then without changing the formula the company began selling it as a substance for washing floors, a cure for gonorrhoea, and then as a mouthwash. As it was the first ever mouthwash, they decided to invent the idea of halitosis to shift Listerine, and it worked, expanding the size of their company greatly.

- Tangent: Alan once had his picture taken with a koala, which smelt wonderful because it ate nothing but eucalyptus.

- XL: The sort of person who would use a left-handed motorbike would be an American policeman. It allows their right hand to be free and thus able to use a gun. They were designed by the Indian Motorcycle Company. Between the two world wars they were the biggest motorbike makers in the world.

- XL Tangent: The panel attempt to use left-handed products such as left-handed pens (designed to reduce smudging), pencil sharpeners, tin openers and scissors. The word "sinister" is Latin for "left-handed". Someone who is "ambisinistrous" cannot write with either hand.

- XL Tangent: Jack's sister is left-handed. He went to a left-handed shop to get some stuff for her, but he walked straight into the door because it opened from the other side.

- XL: Motorbikes do not pay the Congestion Charge in London because of the cameras. Motorbikes only have one licence plate, which is on the back. As a result the camera can only take a photograph of the driver from the back, so they cannot identify who the driver is.

- XL Tangent: Motorbikes used to have a second licence plate on the mudguard, sideways on, but these were dangerous and so scraped.

- A hoplophobe would be nervous of a Sturmgewehr Vierundvierzig with a Krummlauf modification because it can fire over walls and around corners. A "hoplophobe" is someone with a fear of weapons. The Sturmgewehr Vierundvierzig or Sturmgewehr 44 used by the Nazis during World War Two, was the first modern assault rifle, and the Krummlauf was a bent barrel with a periscope which allowed the user to shoot around corners and over walls. It was invented by a washing machine manufacturer called Hans-Joachim Shayede. Such modifications were first used by the Australians during World War One and modern versions are used by the Israeli army.

- Tangent: The website urbandictionary.com defines a "hoplophobe" as: "An irrational fear of weapons, generally guns, usually occurring as a result of a liberal upbringing or the fact that the person is just a wimp in general. Rather than deal with the fear said hoplophobe will assign human characteristics to a weapon i.e. 'guns are evil' or 'guns kill' to justify the fear rather than deal with the core problem of being a sissy."

- The reason why a bomb disposal expert would go into a joke shop is because silly string can be used to show where tripwires are without setting them off.

- You can make a square hole with a round drill by using a drill bit called a "Reuleaux". A Reuleaux is a triangle with bulbous circular sides. The central bit is placed just off-centre, into one corner, which makes it drill out a square.

- Tangent: If you take an ordinary cylinder and take off two identical wedges from both sides so that they meet at the opposite end, so long as the cylinder is at long as it is wide, you can make this shape fit through a circle, triangle and a square hole.

- XL: The roundest thing in the universe is a neutron star. These are formed after a supernova has a gravitational collapse. The diameter is only around 15 miles and the highest mountain on it is about 5mm tall, but they are believed to have twice the mass of the Sun. A thimble full of neutron star would weight more than a mountain.

- XL Tangent: Comparatively speaking, the Earth is smoother than a snooker ball. The Earth is not round, but an oblate spheroid.

- The thing that is made of jelly and lives forever is turritopsis nutricula - better known as the immortal jellyfish. It does not die of old age, although it can die of disease or from being eaten. After it has sex it can then turn back into a child and it can do this time after time again.

- Tangent: In the earlier half of the 20th century it was believed that injecting monkey glands would help you keep young. Monkey glands are actually monkey testicles, although it started with human testicles. The idea was first suggested by Serge Voronoff, a Russian living in Paris. In the 1940s, Wolverhampton Wonderers had a striker called Dennis Westcott who used monkey glands on the insistence of his manager Major Frank Buckley. Westcott scored 38 goals in 35 games. Then the manager of Plymouth Argyle did the same with his whole team. Correction: When Westcott scored his goals in the 1946-47 season Buckley had already resigned as manager in 1944. However, Buckley was manager when he made his team undergo the injections in 1938.

- Snakes are able to eat food which is bigger than their head because their jaws are double jointed. Snakes have a quadrate bone which allows them to stretch their mouths open much wider. In mammals, the quadrate bone became the ear bones. (Forfeit: They dislocate their jaw)

- When a judge wants order in his court he just shouts. British judges do not have gavels, unlike American judges. (Forfeit: Bangs his gavel)

- Tangent: Jack once played a judge in Stephen's drama series 'Kingdom' where he had a gavel.

- XL: If Blackbeard gave you a treasure map the "X" might be a signature because he could not write. There is no evidence to suggest that pirates buried their treasure or even used treasure maps. They preferred to spend what they stole. The idea of treasure maps and burying treasure comes from Treasure Island by Robert Lewis Stevenson. Correction: Blackbeard could read and write.

- XL Tangent: The actor Robert Newton is today most famous for his portrayal of Long John Silver in Treasure Island, where he invented the stereotypical pirate voice. Tony Hancock first became well known as a Robert Newton impersonator. International Talk like a Pirate Day takes place on 19th September.

- XL Tangent: Alan once met a Somali man who really wanted to get on television. He said to Alan: "I'm Somali, but I can do Eritrean."

Sean Lock was intended to be a guest on the show, but he was stranded on the Isle of Man due to the Icelandic volcano, so Jupitus took his place. (Source)

For details on corrections, see the QI Qibble Blog

Stephen Fry and guests discuss the unusual 'rolo-triangle' drill that creates a square.