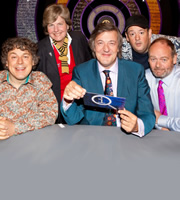 - The best way to weigh your own head would be to go into a cat-scanner which can measure it in great detail. If you cannot get to one, a simpler method is to stick your head in a bucket of water which relates to the Archimedes' principle of buoyancy. The water displayed with give you a good approximation. The average head weighs 12 pounds. (Forfeit: Cut it off and put it on some scales)

- Tangent: David Frost told a joke for years and years which was: "Do you want to lose 12 pounds of unsightly fat? Cut off your head."

- Tangent: Sandi's grandfather had two glass eyes. One matched his working eye perfectly. The other was bloodshot and was referred to as the "party eye". He used to put in his bloodshot one when he was going out for the evening and would say he would not return until his eyes matched.

- Tangent: The wife of Sir Walter Raleigh kept his severed head in a red velvet bag for 30 years.

- XL Tangent: The head of the Archbishop of Canterbury at the time of the Peasants Revolt has been on public display for over 700 years in a church in Sudbury. The Archbishop had his head cut off by the rebels.

- You would engage in paradoxical undressing if you were suffering from hypothermia. One of the final symptoms is that you feel very hot, so you want to take of all your clothes which makes you colder and kills you. It is not known for sure if it is a mental symptom and a sign of delusion, or a physical symptom and people really do feel hot despite actually being cold. One suggestion given is that your blood vessels near the surface of the skin tend to open up and die, which might make you feel hot. The problem is that we do not know if this is the case because no-one survives when they get to this stage. Hypothermia tends to start when your body temperature falls below 35 degrees. People who live in the world's coldest cities suffer from hypothermia less than those who live in warmer cities.

- Tangent: Alan once swam in the freezing cold in New Zealand and when he got out his body was pink and he felt hot.

- Tangent: Briton Lewis Pugh is an endurance cold swimmer who is able to control his own body temperature. He is the only person known to science who can raise his body temperature at will. He believes he can do it because by swimming these cold races for many years this has resulted in his body being able to "see it coming".

- Tangent: John went to a yoga class where the teacher told him that the Sandhu people of India can also control their body temperature. Some experiments were done in the USA where they put wet towels on the Sandhus, and they were able to steam the towels dry in a few minutes.

- XL: You can tell if someone is actually dead by using a stethoscope to listen to someone's heartbeat. In the 1830s a competition with a prize of over 1,000 francs was held in France to find the best way of determining if someone is dead. Rejected ideas included sticking a thermometer into the stomach to see if the patient was cool enough to be dead, attaching pincers to the nipples, scalding the patients armpits to see if a blister would form, putting leeches on the bottom, and sticking a long needle with a flag on the end into the patients heart. In 1848 the winning idea was to listen to the heartbeat with a stethoscope, but most of the medical establishment refused to believe in the idea.

- XL Tangent: Hans Christen Andersen was so frightened of being buried alive that he kept a sign next to his bed with a sign reading: "I'm not dead, I'm asleep." The clown Grimaldi ordered his head to be cut off after he died just to make sure that he was not buried alive. In Germany in the late 18th-early 19th centuries they kept mortuaries warm so that dead bodies putrefied and you could tell which of the bodies were still alive. The fear of death is thanatophobia. The fear of being buried alive is taphephobia.

- It cannot be known for sure whether or not a sound is made if a tree falls down and no-one is around. It is argued by some that sound is defined as the vibration in your eardrum so if no eardrums are there, there is no sound. However, it can be argued that recording devices can detect the sound. Some argue that if there are sound waves, then there is a sound. The question was first put forward by Bishop Berkeley. (Forfeit: No)

- Tangent: Light is invisible. You can only see what light hits. If you shone a beam of light in a vacuum, you would not see it. However, other people argue that the definition of light is what enters your eye and what the person sees.

- If you were talking to an alien in a distant galaxy via radio, you could not describe the different between left and right without referring to something else. The notion of left and right can only exist in a universe that contains something and it cannot be described just by language. Also, it might be the case that the alien might not be symmetrical and who have no need to know left and right.

- Tangent: The way John remembers right and left is by looking at his right thumb which he sucked as a child.

- Tangent: There was once an ocean-liner captain who carried a small silver box which he looked into every time he came into port. His second-in-command asked on the captain's deathbed if he could see what was in the box. Inside was a note saying: "Port - Left. Starboard - Right."

- XL: If you took someone who has been blind from birth and then gave them a cube and a sphere to feel, and then restored their sight, they would not be able to tell which was the cube and which was the sphere just by looking at them.

- XL Tangent: Stephen went to a restaurant in Berlin which was completely dark, so you could not rely on sight to eat your food. All the waiters are blind. Eating the food is different because you use your other senses. When you need to use the lavatory, a waiter takes you by the hand, threads you through the tables, leads you into a closed passageway, closes one door to keep the restaurant dark, then opens a second door which leads you to the lavatory.

- A lorry-load of birds is being weighed on a weighbridge. Then, all at once all the birds jump up into the air. The lorry does not weigh less because the environment is sealed up and thus there would be air pressure when the birds jump. However, it would weigh less if the lorry was not sealed and the birds flew out of the lorry.

- XL: Curses work because the cursed person thinks that something bad will happen to them and they brought down by themselves. A curse is thus a negative version of the placebo effect - it works because you believe in it, but were as a placebo makes you feel better, a curse makes you feel worse, and is known as the nocebo effect.

- XL Tangent: Famous curses include "The 27 Club", which consists of famous people who died at the age of 27. Members of the club include Jim Morrison, Jimi Hendrix, Janice Joplin, Kurt Cobain, Brian Jones and Robert Johnson. The Curse of the Ninth is inflicted on composers who died while writing their tenth symphony. Examples include Dvo?ák, Beethoven, Bruckner and Schubert.

- If Schrödinger put a Siamese cat in a fridge not only would the cat get cold, not only would you not know if it was alive or dead, but it would also turn black. The extremities of a Siamese cat (ears, mouth, paws and tail) are all black and this is because they are colder than the body, so if it is in a cold enough environment for a long enough period of time the whole body would turn black. However, this would take several weeks. When it returns to a hot environment it would turn white again. Himalayan rabbits also change colour at different temperatures.

- Tangent: Buttered cat syndrome is a confliction between two common ideas - that cats always land feet first and that buttered toast always lands buttered side down. So, logically, if you attached a piece of buttered toast that was facing upwards to a cat and dropped it from a big enough height, it would never reach the ground because both would be in conflict and the two would spin around forever. The panel bring up ideas such as if the same would happen if you used margarine or I Can't Believe It's Not Butter! Also, if you covered the toast in something that was not butter, but that cat thought it was butter, the idea being that it would be a placebo effect.

- XL: If you are on Death Row chances are that you would not be able to choose whatever you wanted as your last meal. You can only have what is in the prison kitchen. In many states the final meal takes place several days before the date of execution, and in many states there is a limited budget. In some the budget is $20, in Florida it is $40. You are also not allowed to smoke. One prisoner in Tennessee, Philip Workman, asked for his final meal to be a large vegetarian pizza to be given to a homeless person. He was refused this and as a protest homeless shelters were send dozens of vegetarian pizzas so that Workman's wish could be fulfilled. Another prisoner asked for 24 tacos and only got 4. Just before he was executed Thomas Grasso said his last words in 1995 which were: "Please tell the media I did not get my spaghetti-os, I got spaghetti. I want the press to know this." (Forfeit: You Choose the Menu)

- XL Tangent: England's Death Row is at Lord's Pavilion. It is the front row of seats at the pavilion usually reserved for older members of the MCC.

- Stephen asks the panel to stop him when they know what he is talking about: "It's an insectivorous mammal. It's found all around the world. It's active at night. It's almost totally blind." The answer is a mole. None of the 1,100 species of bat is blind. Moles can distinguish between light and dark, but almost nothing else. There are no moles in Ireland due to glaciation and the separation of Ireland from the rest of Britain and Europe. Almost all photographs of moles are of dead moles, because the photographers fluff them up. (Forfeit: Bats)

- The answer to the most famous of hypothetical questions, "Which came first, the chicken or the egg?", is the egg. This is because birds evolved from reptiles that lay eggs. (Forfeit: The chicken)

- Tangent: There is an old joke about a chicken and an egg which have just made love and the chicken says: "Well, that answers that old question."

- XL Tangent: The most unique thing about chickens is their combs on the top of their head. It is believed to have something to do with regulating temperature.

- Tangent: The longest recorded flight by a chicken is 13 seconds. This is one of the oldest "internet facts" around, but it appears to be true.

This was the 100th QI episode to be broadcast.

Stephen begins a round of 'quickfire hypotheticals' questioning whether sound exists if there's no one to hear it?