This pilot has never been shown on television but was included as an extra on the firs QI Series A DVD release. Guests are Eddie Izzard, Bill Bailey and Kit Hesketh-Harvey. 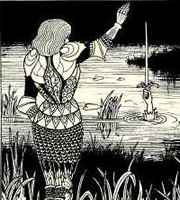 - King Arthur's lance was called "Ron", short for "Rongomynad". His helmet was named "Goosewhite", his armour was called "Wygar" and his war cry was "Clarence!"

- Tangent: Paul Daniels performing a magic trick based on the legend of King Arthur. Arthur called his sword "Caliburn" rather than "Excalibur".

- "Butter hamlets" are small tropical fish which can be found in 10 different colours.

- Tim is the 6th most popular name for a baby boy in Germany. (Forfeit: Adolph - because Stephen's card was spelt like that and Alan who said the answer was thinking "Adolf" as in Adolf Hitler, the penalty was reduced to -8 points)

- William Huskisson MP, the first person killed in a rail accident, had previously escaped death after a horse fell on his head during his honeymoon.

- The penis bones of badgers were used by Victorian gentlemen as tie clips.

- "Rectal inflation" was an old method of blowing tobacco smoke through the rectum as a means to resuscitate the drowned.

- Victorians who could not afford chimney sweeps would drop a goose down to clean it instead.

- Guessing the meanings of Dutch words:

- "Tijdens de Tweede Wereldoorlog moesten vele Nederlanders tulpenbollen eten," is Dutch for, "During the Second World War, many Dutch people had to eat tulip bulbs," which is a true fact.

- Tangent: If dogs eat toothpaste, they hallucinate. Alan admits he heard this fact from someone from the pub. Another kind of dog hunts deer by biting off the testicles.

- Tangent: In Greece, the word for "Bread" and "Lavatory" seat is the same word, "Kolóura".

- The largest mountain in the world is Mauna Loa, which starts under the seabed. Mount Kilimanjaro is also higher than Mount Everest for two reasons: Firstly, it raises straight out of the African plain, whereas Everest is just one mountain on top of lots in the Himalayas. Also, as Kilimanjaro is on the Equator, it is further away from the centre of the Earth as it is an oblate spheroid. (Forfeit: Mount Everest)

- Black boxes are orange. They were black until 1955, when people realised that they were never able to find them in the wreckage.

- Dolphins are eaten in Genoa.

- Scuba diving is illegal off of the coast of Greece, mainly because most of the country's antiquities are underwater.

- Tangent: In Greece, the word for lifebelt is also "Kolóura".

This episode has never been broadcast.