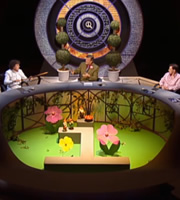 - The set is decorated with trees, flowers, ivy and garden gnomes.

- The tools you need for "do nothing" gardening are animals that do the gardening for you. Also known as "natural gardening" or "natural farming", it is an Eastern version of organic farming. Ducks are used in paddy fields to get rid of weeds instead of herbicides, and carp are used to purify the water.

- XL Tangent: Rob compares the use of animals in natural farming to owning a goat to eat your grass and thus not use a lawnmower. However, goats are now being replaced by wallabies.

- XL Tangent: Masanobu Fukuoka invented natural farming. He also invented seed balls, which are balls made out of clay or mud, with seeds pressed into them. You throw the ball around and it seeds. It is more economical because less seeds are used than normal sowing.

- XL Tangent: Seed guns are little guns which fire seeds into the ground. The idea is that they encourage people to use guns in a peaceful manner.

- XL Tangent: Guerrilla gardening is when you do gardening in secret in land that you do not own. Examples include criminals growing cannabis on the ramps onto motorways or highways. One anonymous guerrilla gardener planted 3,400 cannabis seedlings in the grounds of Rupert Murdoch's Californian estate. Guerrilla gardening is believed to have begun in New York, in 1973. It is popular in Vancouver, Canada, after a load of compost was dumped onto the street by construction workers and another local inadvertently dumped bird seed into the pile. It flowered, and this inspired the people of Vancouver to garden any piece of land they can find.

- The panel are given each a tool used by 18th-19th century gentlemen gardeners, belonging to The Garden Museum, and are asked what they are.

- Alan: A walking stick which turns into a saw, used to cut down overhanging branches.

- Tangent: Alan begins to use his saw to cut through things including the set.

- David: A combination walking stick and hoe. It is missing a leather hat to cover the metal part of the hoe.

- Rob: A glass tube used for growing cucumbers straight. It was invented by George Stephenson, inventor of the first locomotive.

- XL: Stephen asks the panel to draw what they think the first novelty teapot looked like. The answer is that they looked like fruits and vegetables, like cauliflowers and pineapples. The first date from the reign of Queen Anne in the early 1700s.

- XL Tangent: Stephen tells a joke, in which he is sings the song "I'm a Little Teapot". He has his arms both in a "handle" position and says: "I'm a little teapot, short and stout." He looks at one arm and says, "Here is my handle," then looks at the other one and says, "Oh bugger, I'm a sugar bowl!"

- XL Tangent: You should not clean a teapot unless you have to. You should however, rinse it out if it becomes dirty.

- The best place in the world to discover an entirely new species is your own garden. In 1971, biologist Jennifer Owen carried out a very long term study in her own garden in a suburban house in Leicester. She found 533 different types of ichneumon wasp, 15 of which had never been recorded in Britain, and 4 where completely new to science. Naturalist Gilbert White said nature is so full and varied that if you want to find the place with the most variety, it is the place you most study. Just take in small piece of land and examine it hard enough. (Forfeit: The Rainforest)

- Tangent: Rob asks how the wasps were captured. Alan says the best way to help a dying bee is to give it honey. Dara claims it is to kill it. Rob ends up with a compromise which is to drown the bee in honey, but Dara claims that it is a slow and more painful death.

- The person who found garden gnomes attractive was Charles Isham, a vegetarian spiritualist who introduced them in 1847 in the hope they would attract real gnomes. He introduced 21 porcelain garden gnomes, one of which survives to this day and is insured for about £1 million. The red cap worn by almost all garden gnomes is based on the idea that German gnomes and dwarves (like the ones in Snow White and the Seven Dwarves) wore them because they were miners, and German miners wore red caps. (Forfeit: Phwoarr!)

- Tangent: In Wastwater, the Lake District, a selection of garden gnomes were put into the lake at a depth of 48 metres for divers to look at and make the lake more interesting. Three people drowned while trying to look for them, so the police took them away. The gnomes were then returned at a depth of 50 metres, and the police never took them away because health and safety regulations prevent police from diving that far down.

- Tangent: At the dive centre in Leicester there is an old quarry, an aeroplane and a bus. At Scapa Flow, there is a sunken German fleet that can be seen. It is there because at the end of World War One, the allies were arguing what to do with the defeated German fleet, so they sank it. In World War Two the British sunk a French fleet of the coast of Morocco to prevent the Germans from getting it, much to the annoyance of General Charles de Gaulle.

- The reason why American farmers hate Shakespeare is because of him there are now starlings in the USA. An eccentric drug manufacture called Eugene Schieffelin who decided that America should contain examples of every bird species mentioned in Shakespeare. This included starlings that were not native to America, so he had 100 introduced to Central Park. However, they are terrible pests, befouling everything they do not eat. There is an estimated 200 million now in the country.

- Tangent: Alan talks about how he was once on Brighton pier watching a flock of starlings, and he says that someone told him that the starlings come as far away as Germany and Poland. Some flocks can have up to a million birds in them. The flocks are designed to scare of predators.

- Out of "Grocer's", "Grocers" or "Grocers'", it does not really matter which one you use. Despite the attempts of some people insisting that the apostrophe goes in a certain place, as well as societies forming to protect apostrophes, there has been disagreement about where the "grocer's/grocers/grocers' apostrophe" should go in dating as back as the 18th century. In Birmingham, the use of the apostrophe for grocers was abolished.

- Tangent: In Dublin, Dara saw a sign in which was written as "Grocer,s". This leads to a debate about whether or not sign printing companies deliberately let spelling errors go unnoticed.

- Tangent: There are only five places in America which have an apostrophe in them which are Martha's Vineyard, Massachusetts; Ike's Point, New Jersey; John E's Pond, Rhode Island; Carlos Elmer's Joshua View, Arizona; and Clark's Mountain, Oregon.

- You can tell the difference between an apple and pear without tasting or opening them up by whether or not they float. Apples float, pears sink. The oldest variety of apple in England is the Pearmain.

- XL: If you go into a shop to get one or two items and you come out with a load of stuff, then you have been subject to a "Gruen transfer", named after Victor Gruen. Supermarkets are carefully laid out to increase the chances of sales. For example, men are more likely to by things on higher shelves and are more like to pay more, so items designed to attract men are put on high shelves. Cheaper, more everyday things which are more likely to be brought by women are placed on the shelves below (about 3-4ft). Men pick the higher items thinking that they are the best because they are more expensive. Women will get the items lower down thinking they are good value.

- Trees are made out of wood, which in turn is made out of carbon which comes from the air via photosynthesis. (Forfeit: Earth)

- The thing that makes Australian spiders so dangerous is the fact you do not expect them. No-one has died of a spider bite in Australia since 1981 since antivenoms where introduced. The main cause of death from spiders is when they surprise you in cars, and thus you are in such a panic you crash the car. There are two venomous spiders in Australia - the funnel-web and the redback.

You should never let Alan Davies loose with a saw.