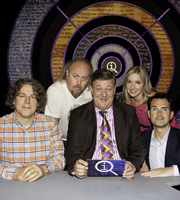 - All the buzzers are of unusual musical instruments beginning with "J". Bill has a jarana, a Mexican percussive instrument. Victoria has a jouhikko, a Finnish instrument. Jimmy has a jalalaika, a Russian instrument. Alan has a Jewish harp, originally called a "jaws harp" because the string is held between the teeth.

- The panel are presented with some obscure words beginning with "J" and are asked what they mean.

- Tangent: A "minced oath" is bowdlerised version of a swearword. In others, when you are just about to swear and you stop yourself from doing so. For example, "Fu... crying out loud!"

- Jigger: Has 28 different meanings. It is a measuring device (a jigger of rum), a handcar, a sail, a small weight, a snooker rest, a flea, a prison cell, a boot-sole polisher, an old-looking person, a distillery, a penis, a copper's knife, a potter's wheel, a back passage, a lathe, a woman's coat, a sieve, a dancer, a pulley, a door, a thingummy, a golf club, a ouija board, a policeman, and a vagina.

- XL: Dr. Johnson tied up himself with his padlock. He was a sickly man, suffering from scrofula (aka The King's evil), gout, half-blind, palsy, dropsy, flatulence, OCD and possibly from Tourette's syndrome. He had violent tics, seizures and outbursts. When went to live with a Mrs. Hester Thrale in Streatham whom he was deeply in love with. He told her that he has a padlock and chain and if at any point he got out of control he gave her permission to chain him up. However, Mrs. Thrale went off to Italy and married an Italian. Mrs. Thrale said: "Says Johnson, a woman has such power between the ages of 25 and 45 that she may tie a man to a post and whip him if she will. This, he knew of himself, was literally and strictly true."

- The one thing we can all agree that Hitler, Stalin and Franco got right that Mussolini got wrong was that the first three all hated jazz while Mussolini liked it. It should be pointed out however that this is the opinion of the QI elves and not of Stephen who does like jazz. Mussolini's son Romano was one of post-war Italy's greatest jazz musicians and went on to play with Dizzy Gillespie, Duke Ellington and Chet Baker.

- XL Tangent: In South Africa jazz was really important to the black community. The clubs were underground and illegal. The consequences for taking part where dire. During WWII jazz had a similar role in Paris.

- Tangent: Similarly with jazz, Hitler supposedly hated Jewish comedy because if you liked something about a group of people then you could not hate them or victimise them. This is what is known as "cognitive dissonance", the ability to hold two opposing opinions at the same time. Victoria gives an example: she is on QI, having a nice time, and yet the question "What did Hitler get right?" has come up.

- Tangent: The night before the recording of this episode, Victoria had an anxiety dream about appearing on the show. In the dream Stephen asked sternly the question: "Why was the March Hare so important to the Aztecs?" Victoria answers that they worshipped it, then the klaxon sounded the forfeit "Worship it" comes up on the screen.

- XL Tangent: The Russian writer Maxim Gorky wrote the following on the subject of jazz: "The dry knock of an idiotic hammer penetrates the utter stillness. One, two, three, ten, twenty strikes, and afterwards, a wild whistling and squeaking, as if a ball of mud was falling into clear water. The follows a rattling, howling and screaming, like the clamour of a metal pig, the cry of a donkey, or the amorous croaking of a monstrous frog. The offensive chaos of this insanity combines into a compulsive pulsing rhythm. Listening to this screaming for only a few minutes, and one involuntarily pictures an orchestra of sexually wound-up man men, conducted by a stallion-like creature who is swinging his giant genitals."

- Tangent: During the bird question four pictures of bird were shown, each beginning with "J". The birds were (from left-to-right) the Juan Fernandez tit-tyrant, a type of flycatcher from the Juan Fernandez Islands of Chile; the Jackson's widowbird, a weaverbird; the Jabiru, a stork; and the Japanese waxwing.

- The thing that Watson did twice as often as Holmes was ejaculate. During the time the novels were written to "ejaculate" meant "to exclaim". There are 23 ejaculations in the canon, 11 from Watson and 6 from Holmes. Holmes at one point refers at Watson's "ejaculations of wonder being invaluable to his art". Watson also ejaculates from his very heart in the direction of his fiancé. One sentence reads, "So he sat as I dropped off to sleep, and so he sat when a sudden ejaculation caused me to wake up." One character called Phelps in The Naval Treaty ejaculates three times. The only other ejaculator is Mrs. Sinclair's husband who ejaculates from second-floor window.

- XL: The people whose speech intones, harangues and declaims in a long, meandering cascade of sounds, syllables, stresses and intonations that might at first seem to be full of sense and meaning, but soon reveal itself to be an empty, vain, hollow and completely meaningless stream of gibberish are babies. There are phrases in the development of their speech, known as "Toddler jargon". (Forfeit: You do, Stephen)

- XL Tangent: There is a website where you can enter the due date of your baby in and they will send you weekly emails about the development of the foetus, and after the birth they will continue to send emails about what your baby will be doing. These predictions are very accurate. It is the same for all babies.

- The first person to use the expression "OMG" as we use it today was Lord Fisher in 1917. He wrote a letter to Winston Churchill, then First Lord of the Admiralty during the First World War, saying: "I hear that a new order of knighthoods is on the tapis [on the carpet]. OMG (Oh my God), shower it on the Admiralty." In Eric Partridge's Dictionary of Abbreviations in 1942 contains abbreviations such as "agn" (again), "mth" (month) and "gd" (good).

- Tangent: Bill once heard a kid on the street say "LOL" rather than actually laugh. To see how weird this is, Bill gets the entire studio audience to say "LOL" together with as little expression as possible. Tim Minchin has suggested that because people do not laugh out loud when they say "LOL" they should instead say "MAS" - "Mildly Amused Smirk".

- Tangent: The first use of the word "to unfriend" was in 1659. It was used by Thomas Fuller who wrote to theologist John Heylyn, "I hope, sir, that we are not mutually unfriended by this difference that hath happened betwixit us."

- Arabic numbers are actually Hindu in origin, so they most likely came from India. In Arabic they called them "Hindu numbers" and Arabic numbers have very little in common with Hindu numbers. On a small number of numerals such as "9" look similar to the Hindu ones.

- Tangent: The only number in the English language which is in alphabetical order when written out is forty.

- XL: The most difficult word to guess in a game of hangman is "Jazz". Victoria however argues that the difficult word is "Cull" because "U" is the last vowel people go for. A researcher simulated 50 hangman games for every word in the dictionary, totalling 90,000 words and nearly 5,000,000 games. The 1,000 trickiest words were taken, played the game 3,000 times for each word, playing a total of 15 million games. Other than jazz, other difficult words include "hajj", "lynx", "buzz" and "fuzz".

- XL: Stephen shows a panel a jigger device, operated by Alan, which is used by the Inuit to fish. This is used to put a net down into the ice. A leaver is used to thread a net from one ice hole to another, with the leaver resting on the ice upside-down. As you pull the net, the leaver moves across the ice.