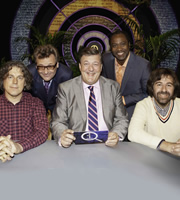 - The studio is covered in plants and bathed in green lighting. The QI logos lit up are made up to look as if tree branches and leaves are blocking them.

- The lion will sleep in the savannah tonight, or to be more exact mostly in the daytime. Lions have never lived in jungles. The song "The Lion Sleeps Tonight" is the most popular song to have ever come out of Africa. Solomon Linda, a black South African, wrote with his band the Evening Birds the song "Mbube", which is Zulu for "Lion". The original chant was, "Mbube, uyi Mbube", which means, "Lion, you're a lion". Linda was paid £1 for the son. In 1949 Pete Seeger gave it to The Weaver, who made it a big hit. Lots of other people and bands made the song a hit, most notably Tight Fit. In 1994 the song was incorporated into The Lion King. It is now estimated that if Linda had been paid standard composer royalties he would have earned $5million from the song, just from the Broadway version of The Lion King in five years. However, a South African journalist called Rian Malan brought the case to international notice and the Linda's family sued, eventually reaching a settlement.

- The best way for Tarzan to get around the jungle would not be to swing on vines: partly because they are actually lianas because vines do not grow in the jungle, and partly because they grow from the ground and not from trees. Gibbons make their way through the jungle via brachiation, which involves using the arms to move along. Edgar Rice Burroughs, creator of Tarzan wrote: "He leaps through the trees unaided. He could drop 20 feet at a stretch from limb to limb in rapid descent to the ground, or he could gain the utmost pinnacle of the loftiest tropical giant with ease and the swiftness of a squirrel." (Forfeit: Swinging on vines)

- Tangent: The picture depicting Tarzan in the background during the question features Johnny Weissmuller as Tarzan (he made his name as an Olympic swimmer) and Maureen O'Sullivan as Jane. The boy in the film was just called "Boy" and the chimpanzee was called "Cheetah".

- Tangent: Greg is tricked into taking the vines forfeit by Alan. Greg later claims that Alan is Tarzan's chimp, because cheetahs never prosper.

- Tangent: Vine comes from Latin, result in Alan to ask why is wine not called "vine". When Stephen was at school he was taught to pronounce the "V" as a "W" in Latin classes, so Stephen would say the phrase, "weni, widi, wici" at school. Also, Caesar was pronounced more phonetically. The words "Kaiser" and "Tsar" come from "Caesar". The German for "wine" is "wein". The name for Caesar salad comes from the cook who invented it, Caesar Cardini.

- XL: The panel are shown a picture of two different kinds of monkey, one with a very large nose and one with a very red face, and are asked what they are called. The big-nosed one is the proboscis monkey of Indonesia and South-East Asia. The males have noses often going as far down as below the chin, which the females find attractive. The technical name for is the orang belanda, which means, "Dutchman", who were the colonists in the area. The natives thought the Dutch looked like the proboscis monkey. The red-faced monkey is the uakari monkey of South America, which the locals call "English monkeys" because they look like sunburned English tourists. They are lethargic in zoos but active in the wild.

- XL Tangent: The Bonobo monkey is the most highly sexed animal on the planet. It will try and shag anything you put in front of it. They look similar to chimps. Lions are highly sexed too. Lionesses will sometimes have sex 50 times a day, although each session only lasts 10 seconds. About 8% of all lion sex is gay. So far 642 species of animal have been observed having homosexual activity, but humanity is the only species that can be homophobic.

- XL Tangent: Poet William Blake once wrote: "A robin red-breast in a cage, puts all heaven in a rage."

- Ginger ants, also known as fire ants, do not use soap because in order to get across water they make rafts out of themselves and the soap will break the surface tension. None of the ants drown because of the plastron layer of air between their bodies and the water. The ants can travel for weeks like this, in groups of 500,000. The can assemble and disassemble themselves in less than 100 seconds.

- Tangent: "Plastron" comes form the Italian "piastroni", meaning "breastplate". The plastron is also the name for a turtle's underbelly and a man's stiff, formal shirt-front.

- A jolly jape: Stephen gets two specially coated pots of sand, one red, one blue, and a blow of water. The red sand is coated so that it stays on the surface. You can poke your finger into it and your finger will remain dry. The blue sand sinks to the bottom and clumps together, but if you take it out of the water it will instantly dry and not make any contact with any water near it. The blue sand has been coated in what Stephen calls, "a brand of spray that you are encouraged when you buy suede shoes to use to protect your suede shoes that might be called something that rhymed with Gotch Scard."

- The thing that goes at 40mph and smells of curry is the western grey kangaroo, the fastest of all the kangaroos. Many animals smell of other things.

- XL Tangent: Other animals which smell of other things include the binturong, also known as the bearcat despite being related to neither a bear or a cat (it is closer to the civet) which smells of freshly made popcorn, and the common blue butterfly which according to naturalist Geoffrey Grigson smells of chocolate, or as Alan says, "A finger of fudge".

- XL: Dubious theory - At least 10% of all the Amazonian rainforest was deliberately created by human activity over a period of 1,500 years, more than 1,000 years ago. It is in fact a gigantic orchard twice the size of Great Britain. Reasons for believing the theory include the large amount of fruit in it which humans consume, and that a large part of it grows in soil that is of human origin. The soil, known as terra preta (Portuguese for "black earth"), contains charcoal, bone, manure and pottery. This soil can only be humanly produced. According to a BBC Four documentary on the subject called Unnatural Histories, an advanced civilization of between 5-6 million people flourished along the Amazon until the 1540s when 95% of the population were killed by diseases brought by the Spanish. By the 18th century the rainforest was empty and no buildings were left behind, just the soil. For more information visit jungleschmungle.co.uk

- XL Tangent: The Native American population in North American was reduced to a quarter of its original size by the Spanish who came to North America with their pigs, bring pig-borne diseases with them.

- The world's most hideous lunch is the Epomis beetle larvae. If a frog tries to eat it, the larvae might attack the frog, latching itself onto the frog using its horns, and then eat the frog inside out. If the frog manages to eat the larvae, an hour later the frog will vomit up the still alive larvae, and then the larvae will eat the frog.

- XL Tangent: While 10% of predator/prey are cases were the predator eats something bigger than it, the Epomis beetle larvae is one of the few which lures in its prey, wanting the frog to eat it so it can then attack.

- The panel are show some film footage of a frog near a waterfall stretching its legs and are asked what it is doing. The frog is actually communicating, because the waterfall is so loud it is easier to communicate visually rather than verbally. It is known as the semaphore frog. The frog is either telling males to back off or trying to attract females.

- Tangent: There is a species of spider that ejaculates sperm into their web, transfer the sperm-laden web pads onto their palps, which is their version of antennae, and them wave them around to attract a mate.

- The sound of Alan's buzzer is the sound of crickets which make their nose by taking the large vein from the bottom of each wing, covered in comb-like teeth, and the rubbing top of one wing over the bottom of the other. No insect makes any noise by rubbing their back legs together. The act of making noise by rubbing body parts is called "stridulation". Only males make the noise and their do it for four reasons: to attract a female, to court a female, to warn off another male, and to celebrate a successful mating. (Forfeit: By rubbing their legs together)

- Tangent: If you count the chirps of a snowy tree cricket in a 14 second period and add 40, you will get the temperature in Fahrenheit. This comes from Amos Dolbear's 1897 book The Cricket as a Thermometer. This is known as "Dolbear's Law'.

- The thing that lives underwater and is the loudest animal in the world for its size is the water boatman. It is 2mm in length and makes a noise measuring at 99.2db. The theory is that they make the noise rubbing their penises against their tummies. To test their theory out the panel are each given metal rods and rub them with rosin, and rub the rods with it. (Forfeit: Blue whale)

- XL: There is a species of striped animal in full view in the studio all night - humans. We have very faint strips on our skin. Discovered in 1901 by dermatologist called Blashcko, they are known as "Blashcko lines". He studies 140 different patients with a particular kind of skin disease which show if you have this particular illness.

- XL Tangent: Zebras are technically considered to be white with black stripes, not black with white stripes.

- XL Tangent: Humans are faintly bioluminescent, but it is 1,000 times weaker than human eyes can detect. This was discovered in Japan in 2009.

Stephen conducts an interesting experiment with sand and water.