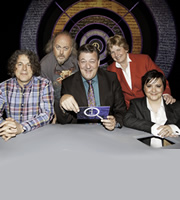 - Strictly speaking, the phrase "chariots of fire" comes from the poem And did those feet in ancient times by William Blake. Jerusalem is the name of the song based upon it. The feet in question are those of Jesus, and there is a legend that he and his uncle Joseph of Arimathea came to visit Glastonbury Tor, Penzance and Falmouth, looking for tin. The legend claims that the Glastonbury Tree was planted by them. Arimathea is only referred to once in the Bible and no-one knows where it is. (Forfeit: Jerusalem) Correction: "Chariots of fire" is much older. It comes from the Bible. 2 Kings 6:17 reads: 'Then Elisha prayed and said, "O Lord, I pray, open his eyes that he may see." And the Lord opened the servant's eyes, and he saw; and behold, the mountain was full of horses and chariots of fire all around Elisha."' Also, the poem by Blake was untitled, so And did those feet in ancient times is not the title of it.

- Tangent: The Aetherius Society is a group of people who believe that Jesus appeared to them at the top of a hill. The leader is a neighbour of Bill. The founder claims he was doing the washing up in his flat when he heard a voice saying: "You have been chosen as the planetary representative of Earth."

- XL Tangent: The Greek for "Sun" is Helio, and for "turn" is "Trope", hence "Heliotrope". Many lizards are also heliotropes because they are cold-blooded and need the sun to warm them up.

- XL Tangent: Alan jokes that Katie Price is a heliotrope. Sandi met her once on a breakfast TV programme and Sandi learnt that Price was there to plug her autobiography saying that, "I'm looking forward to reading it."

- Your pocket might smell of fish if you went to a wedding or banquet in medieval Japan. At the time it was custom to drink the drink you were given, but you should take the fish, bring it up to your mouth and then tuck it away into your pocket. In modern day Japan there is a tradition that when a baby is 100 days old they take food like sea bream, beans, soya and rice, wave it in front of the baby's face but not to let them eat it.

- Tangent: The difference between Sashimi and Sushi is that Sashimi is raw fish and that Sushi is cooked fish rolled in rice. Sashimi is also sliced at an angle. The knife skills are really important in Japanese culture. In medieval Japan there were at least 47 different carp cuts, representing different aspects of life and activity. These included "Departing for battle carp", "Celebratory carp", "Taking a bride carp", "Flower viewing carp" and "Moon viewing carp".

- Tangent: When Stephen goes into a Japanese restaurant he jokingly says, "Bring me a selection of drinks and don't get all sake."

- Sake is technically a type of strong beer. The word "sake" means "alcoholic drink", and the word for the drink that we called "sake" is "Nihonshu" which means "Japanese liquor". Originally people would just chew the rice and spit into a large container. The enzymes from the spittle would cause the breakdown of the starch into sugars, which starts the fermentation. (Forfeit: Rice wine)

- Tangent: Tempura is not Japanese. It was introduced into the country from Portugal. "Vindaloo" is also a Portuguese word.

- XL: For a quick pick-me-up the people of Java lie on railway lines. Someone tried to commit suicide by lying on the line because they had an illness, but when they did they found that they had been cured and he walked away. This caused a spate of people lying on lines hoping for the same thing, but it does not work because all the power for the trains is in overhead cables. They do not use coffee, nor does anyone else in the world. Instead you get withdrawal symptoms and anxiety from the lack of caffeine if you do not drink it regularly. Scientists recommend that you should drink coffee regularly at a set limit, or do not drink it at all. A bad thing to do is to drink lots of coffee for a few days and then go back to previous level, because your body will then be hooked on the new, higher level. (Forfeit: Coffee)

- XL Tangent: The Javanese also take part in roof surfing, which is running on the roofs of trains. In order to stop it the government erected grapefruit-size concrete balls at human head height.

- The Krakatoa volcano is actually to the west of Java, not to the east. The eruption was in 1883. It was the loudest sound that has even been experienced by humanity. It could be heard 3,000 miles away and it reverberated around the world seven times. It was 13 times greater than Hiroshima bomb. Five cubic miles of rock were spewed into the air. It was the first global news event. When a party of humans finally arrived at the site the only living creature on the island was a spider.

- XL Tangent: The Great Winter of 1815 was caused by another Indonesian volcano, Mount Tambora. It caused the deaths of 100,000 people due to disease and famine, while Krakatoa killed 36,000.

- The most hurtful thing that Rimbaud's boyfriend did to him was to shoot him in the wrist. Arthur Rimbaud was a poet who was very talented at a young age. He was beautiful and wrote is greatest work between the ages of 17 and 21. He won a regional poetry competition as a schoolboy despite sleeping through the first three hours of the exam. When he was 16 he ran away from home with no money. Later on he fell in love with another poet, Paul Verlaine, and the two lived in Camden. There is a blue plaque marking where they lived which was the first such plaque celebrating a gay couple. However during their relationship Verlaine in a rage shout Rimbaud.

- Tangent: Another French poet, Gerard de Nerval, had a pet lobster which he would take on walks with a lead.

- XL Tangent: Verlaine wrote a poem of huge international importance. His poem which begins, "Les sanglots longs de violins de l'automne, blessent mon coeur d'une langueur monotone," was used as a code by the British to the French Resistance that the D-Day landings were about to start and that they should begin their sabotage.

- Mannish water is made using the male parts of a goat. A Jamaican dish, it is also known as "Goat's head soup", and uses a goat's head, feet and intestines, served with bananas and spices. It is believed to be an aphrodisiac. Goat's Head Soup is also the name of an album by the Rolling Stones, because it was recorded there, mainly because it was one of the few countries that would allow them. Other Jamaican soups include cow cod soup, which is made from a bull's penis, chilli peppers and bananas, cooked in white rum.

- XL: The place where fathers are barely older than their sons is Japan. 98% of adoptions there are of adults. It is traditional to an adult young man, usually between 25 and 30, to be adopted from their real parents, mainly for business reasons. For example, if you biological son is a bit of a clod, but you want it to stay a family business, the father will adopt a clever young man, and probably marry him to your daughter. There is a saying which goes, "You can't choose your son, but you can choose your son-in-law." The current chairman of Suzuki is the fourth adopted son to have run the company - i.e. he is the adopted son, of an adopted son, of an adopted son, of a Suzuki.

- The panel are shown a picture of two different towns, both of which are coloured blue. The one on the left is the Spanish town of Júzcar, which was painted blue to promote the film The Smurfs in 2011, and a referendum was held to keep blue because of the tourists it attracted. The other town was Jodhpur in India, which was painted blue and indigo because of the caste system. There is also a pink city in India, which is Jaipur.

- XL Tangent: Jodhpur was painted pink in honour of King Edward VII, then Prince of Wales, when he visited it in the 1870s.

- XL: Nobody knows what you would keep in a 14-tonne jar with no lid. These jars in Laos, made from granite and no-one knows how they were made. There are 90 sites with these on, containing up to 400 jars each. Some suspect that dead bodies were put in them to decompose, then they were taken out and cremated. Others think that the people believed that if they had a big enough jar the gods would fill it with bounty.

- XL Tangent: Papua New Guinea had a series of cargo cults involving runways. When missionaries came on planes the natives asked what they brought with them. They told them it was cargo from Sydney, Australia. The locals then developed a god called Sydney and built runways for him, hoping that from him to bring them cargo, which failed to work.

- The capital of Alaska, Juneau, is only accessible by air or water, as no roads lead to it.

- The biggest joke ever to come out of Alaska, with the possible exception of Sarah Palin, was an April fool that tricked people into thinking that a volcano was erupting. The hoaxer, Porky Bickar, took kerosene, smoke bombs and tyres, dropped them down the crater of the volcano and set them alight. However, below that he also had a sign in 50 foot letters saying "April Fool", and he also warned the federal authorities (except the coastguard).

For more information on this quibble, see the QI Qibble Blog