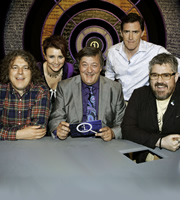 - If you have forgotten where you left your passport, or indeed any object you have misplaced, the best way to find is to say to yourself the name of the object over and over again. Just keep repeating "passport" and it will help you find it. This is according to research at the University of Wisconsin.

- Tangent: Alan once lost his passport down the back of the seat of an aeroplane. The entire seat had to be dissembled in order to get it back. Alan refused to get off the plane while this occurred.

- The travel arrangements of the Japanese flying snail involve being picked up by birds and dropped over long distances. It usually travels at a distance of 11 miles. The birds in question, on the island of Haha-jima of the Ogasawara Islands, are the Japanese white-eye and the brow-eyed bulbul. These birds eat the snails, but 15% survive and are excreted out alive about 30 minutes - 2 hours later.

- When the call of "Abandon Ship" is exclaimed, the thing that is unlikely to be shouted next is "Women and children first." It is known as the "Birkenhead Drill", but there have only been two cases were it has been carried out. The first was on a ship called the Birkenhead, but this was because the captain held a gun to his crew and ordered that it should be women and children first. The second time was on the Titanic. Women have less chance of surviving on a sunken British ship than on a continental one. (Forfeit: Women and children first)

- XL Tangent: Rob once had to muster. He was filming Cruise of the Gods with James Corden when the ship hit a rock because it was leaving port too quickly. Rob was terrified during the whole ordeal.

- XL: The person who hung out with Richard Burton and drove cabbies around the bend was Mrs. Prodgers. This is not Richard Burton the Welsh actor, but the Victorian English explorer who was scandalous in his day. Burton spoke 29 languages, and provided the English-speaking word the unexpurgated translations of the 1,001 Arabian Nights and the Kama Sutra. Burton's friend Mrs. Prodgers hated cabbies with a passion. She knew within feet the exact limits of journeys they could make for one shilling, so she would make the cabbie do a journey with a few yards of the boundary which would allow them to charge more, and then she would wait precisely the amount of time she was allowed to wait without them charging for extra time. If a cabbie did try to get more money off Mrs Prodgers, she would take the cabbie to court and she would usually win. One of her habits would be to arrive at King's Cross with five porters - three for her luggage, two to carry her children - then she would go the line of cabs. Immediately someone would shout that Mrs. Prodgers was there and all the cabbies waiting outside would flee. On Bonfire Night 1876, cabbies burnt an effigy of Mrs. Prodgers. There music hall songs about Mrs. Prodgers.

- It would take you longer than you would expect to cycle from Land's End to the northernmost part of Britain, because the northernmost part is not John O'Groats, but Dunnet Head. As the crow flies the distance between the two is 603 miles, but by road it is about 800 miles. Cyclists can take between 10-14 days to complete the course. The record for running the route is 9 days and 2 hours. In 2005 golfer David Sullivan hit a golf ball all the way along the route. It took him 7 weeks. In 1911 the motorcycle record was 29 hours and 12 minutes, but this lead to a ban on further attempts because the time showed that this record broke the then speed limit of 20mph. (Forfeit: What, John O'Groats, you mean?)

- Tangent: The panel are shown a picture of the "Last House in Scotland" in John O'Groats, and Alan gets excited because outside the house is donation box in the shape of a child in callipers, which has not seen in ages, which leads to talk on all sorts of charity boxes. Outside the Queen Victoria Building in Sydney there is a talking charity box in the shape of Queen Victoria's dog. The box says: "During my lifetime because of my good deeds, after my death I was granted the power of speech. If you put a coin in the box I will say 'Thank you.'" The dog the pauses and says, "Thank you. Woof."

- The panel are shown a picture of a black bird with a smallish black beak. They asked what the bird is. It is actually a puffin, because they moult their beaks and change their feathers every winter. They only look bright during the summer when they are attracting mates. They mate for life and have one egg a year. A baby puffin is called a "puffling" and the puffin is a type of auk.

- The naturalist on board the Beagle was the ship's doctor McCormick. Charles Darwin was the geologist. McCormick resented Darwin being on the ship. The captain, FitzRoy wanted a gentleman companion to be on the ship and Darwin fitted the role better than McCormick. On Christmas Day 1835 the crew went to Tierra del Fuego in South America, where Darwin noted that when there was a famine the people ate old women because they were the least useful to the society. (Forfeit: What, Charles Darwin, you mean?)

- XL Tangent: Darwin once wrote in his diary: "My friend the doctor is an ass, but we jog along very amicably. At present, he is in great tribulation whether his cabin should be painted French grey or dead white. I hear little, excepting this subject, from him."

- There is nowhere that actually worships jackal-headed gods. Although Egyptologists still call them jackals, zoological DNA research has shown that the animals that existed at the time were wolves. The most famous jackal-headed god is Anubis, the guided the dead though the spirit world. A god that guides you through the underworld is known as a "psychopomp". (Forfeit: What, Egypt, you mean?)

- XL: Dubious Theory - The phantom time hypothesis: According to this theory by Heribert Illig, created in 1990, the years between 614-911 AD do not exist. Holy Roman Emperor Otto III got his chroniclers to fake nearly 300 years of history. As a result there was no such person as Charlemagne and we are really living in the 1715. The theory states that Otto III wanted to be on the throne in the year 1000 AD, so he got his chroniclers to fake 300 years. Illig's evidence is the stagnation of architecture, ceramics and thought during this period, known as the Dark Ages, There is also very little archaeological evidence which can be reliably dated to this period; very few written sources, which could be faked or just wrong; and Charlemagne's achievements were so great that you could think of him as more mythical than real. For more, visit Phantomschmantom.com

- XL: There are two interesting things you can do with a coconut on Hawaii. One is that you can send it as a postcard (but only inside the USA) by carving a message onto it. You can also us it a re-hydration drip, which was done by both the Americans and Japanese during World War II, because the water in it is sterile. You can also use it to keep teeth in, as the water will keep it viable for reinsertion.

- XL Tangent: Cal had a friend who was nearly killed by a coconut, but Cal was annoyed that her friend waited 20 years to tell her.

- XL: JFK kept a coconut on his desk in the Oval Office because it helped to save his life. During World War II he served on the torpedo boat PT109, but it was sunk by the enemy. Kennedy then found himself stranded on the Solomon Islands. As he knew no-one there he carved a message onto a coconut that read, "Nauro Island. Commander. Native knows position. He can pilot. 11 alive. Need small boat. Kennedy." He asked some locals to take it to the capital, Rendova, and he was eventually rescued. The coconut was then given to him as a memento.

- XL Tangent: Stephen can remember being told of Kennedy's death when he was six. Alan can remember Ronald Reagan being shot, during which time his father was in the kitchen. Alan shouted that Reagan had been shot and his father acted nonchalantly, because he thought that Alan was referring to Regan from "The Sweeney".

- XL Tangent: In 1981 when they premiered "Chariots of Fire" and they asked the Cambridge Footlights, which at the time consisted of Stephen, Hugh Laurie, Emma Thompson and Tony Slattery, to perform a cabaret at the Dorchester Hotel after the premiere. Stephen spoke to his mother about this who told him that she was staying at the Dorchester when JFK was shot. As they performed Stephen and Emma noticed that the crowd were talking to themselves, as they learnt that Reagan had been shot. When Stephen phoned his mother about the incident his mother said: "No member of this family is ever allowed to go to the Dorchester again. It's not safe for Western democracy."

- The travel organisation which includes a mandatory fee for the repatriation of your corpse is the one that organises the Marathon des Sables (Marathon of the Sands), an ironman style race in which you have to carry your own food, although there are water stops, and you run a marathon for six days across the Sahara. One man, Italian policeman Mauro Prosperi, was during the race in 1994 and got caught in a sandstorm. The official instructions say that you hunker down and wait until it passes, but he ignored this, ran on and got lost. By the second day he was drinking his urine. On the third he found an abandoned shrine, killed some bats and drank their blood. He then decided to kill himself with a pen knife, but he was so dehydrated the blood would not flow. He ran for five more days, drinking urine and dew, and eating lizards. After nine days he found some nomads who returned him to safety. By this time he lost three stone in weight and was 130 miles off course in Algeria. However he did the race again for six years. Prosperi said of the event: "I didn't panic. I just despaired."

- Napoleon did not say many of things we attribute to him to Josephine. There is no evidence that he told Josephine not to wash. The earliest source for this quote is 1981. The other supposed quote, "Not tonight, Josephine", comes from a play by W.G. Wills called The Royal Divorce, which dates to 1891. (Forfeit: "Don't wash")

The panel talk about Stephen giving names to his possessions. Is his wallet really called 'Peregrine'...?