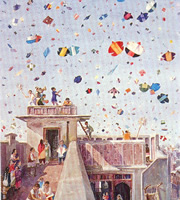 - The chances of burning to death while you sleep are 1 in 48 million.

- The chances of being murdered are 1 in 30 million.

- According to the United Nations, you are three times more likely to die at work than you are at war.

- Tangent: Sean was once arrested after he knocked a security guard's hat off.

- The most dangerous military stratagem was created by King Goujian of Yue (Vietnam) in 496 B.C., which involved putting convicted criminals on the front line and ordering them to cut their own heads off to frighten the enemy.

- Tangent: If you cut a duck's legs off, it can still swim.

- Tangent: There is a story during the French Revolution that two decapitated heads were put in the same basket and that one head bit the other so tightly that they could not be separated.

- The most dangerous sport in the world is flying kites during Basant in Pakistan, itself the most dangerous country in the world. The object of the game is to cut the strings, which are filled with shards of glass and metal. As a result, people often get garrotted. It can now only be played for 15 days of the year.

- The most dangerous manager in the world was tightrope walker Charles Blondin's.

- The first person to ever go over Niagara Falls in barrel was Annie Edison Taylor.

- Tangent: The third person to go over Niagara Falls in a barrel was a Briton, Charles Stephens, who tied his legs to an anvil to make it more exciting. All that was found of him after the drop was a severed arm inside the barrel, with a tattoo which read, "Forget me not, Annie".

- Tangent: A pirate ship was once filled with animals and sailed over the top of Niagara Falls. Only two geese survived. Two bears crawled out, and were shot.

- The most dangerous sporting activity for women is cheerleading.

- The bungee strap, used in bungee jumping, was invented in Britain. You can suffer from detached retinas and detached breast tissue (if done in the nude).

- Tangent: Jimmy tells the story of a Darwin Award winner (an award given to people who kill themselves in very stupid ways). It is of a man who went bungee jumping with a towrope from a bridge. His foot snapped off and he landed in a freezing river. He also tells the story of Lawnchair Larry, the man who tied lots of balloons to his chair and flew about a mile high.

- You should have 4-7 hours sleep every night.

- The most dangerous earthquake in the USA since European settlement was either the New Madrid, Missouri earthquake (1811-12) or the Prince William Sound, Alaska earthquake (1964). (Forfeit: San Francisco 1906)

- Tangent: 3,000 white people died in the San Francisco earthquake, but the Chinese dead were not counted. Some people set fire to their houses during the quake to claim on insurance, because they were not covered for earthquakes. Police were ordered to shoot three people on the roof of the Windsor Hotel in front of 5,000 people, rather than the see them go through the roof. Someone else asked to be killed, so the police took his name, his address and shot him through the head.