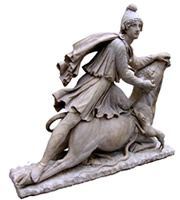 - Tangent: Over £20 billion pound is spend in the UK during Christmas. One-third of all the books, clothes and toys are sold in the last 8 weeks of the year. 150 million cards are sent. 7.5 million trees are decorated. The UK buys enough wrapping paper to gift-wrap Guernsey.

- Christmas is celebrated on 25 December because it is the birthday of the Roman sun god Mithras. Some of things claimed about Mithras include him being a saviour sent to Earth to live a mortal whom it was possible for sinners to be reborn into immortal life. He died for our sins but came back the following Sunday. He was born of a virgin on 25 December in a manger (or perhaps a cave), attended by shepherds and became known as the light of the world. He had 12 disciples whom he shared a last meal before dying. His devotees symbolically consume the flesh and blood of him. Because he was a sun god he was worshipped on Sundays. He is often depicted with a halo around his head. Worshippers of Mithras gave each other gifts on 25 December. The leader of the religion was called a "Papa", and their HQ was Vatican Hill in Rome. There are lots of religions that have similar stories to the Christian Christmas story. (Forfeit: Jesus' Birthday)

- Tangent: No-one is certain on what date Jesus was born. According to Islam, Jesus was born in the summer. Jehovah's Witnesses claim he born on 1 October)

- After Christmas lunch, the Queen watches herself giving her own Christmas Speech on television. (Forfeit: Goes for a walk)

- Tangent: Amongst other things, the Royals give their presents on Christmas Eve because of their German heritage. Stephen is booed because he, like the Queen, gets his Christmas tree cut from the Sandringham Estate.

- The thing that suffers the most at the office Christmas party is the photocopier. People really do photocopy their backsides. According to Canon Engineer Geoff Bush, people sometimes end up with broken glass in their posterior. Things found in photocopiers include sleeping cats, snakes, kitchen knifes, sausage rolls, condoms, stockings, vibrators and a cheque for £6,000.

- Tangent: In the two weeks up to Christmas, there is a 25% increase in emergency call-outs for photocopier repairs.

- Champagne was invented by the English in the 16th century. The English had the only technology that could make bottles that did not explode. They also added sugar and molasses to make wine fizzy. In the 19th century, the French invented the myth about Dom Pérignon accidentally inventing champagne. However, Pérignon did invent the wire cage that goes over the cork and also did the blending. (Forfeit: The French)

- Tangent: Jo tried to make her own ginger beer and vodka. Dara used to work at a bar and describes how to serve a pint of Guinness correctly, also saying, "If someone paints a shamrock into it, you're allowed to stab them in the eye with a fork."

- A true Catalonian Christmas nativity scene contains a figure called the "Caganer", who squats and defecates, normally in a corner. Famous people who have been the Caganer include George W. Bush and David Beckham. Their version of the Christmas log translates into English as a 'shit log'. Once Catalonian phrase translates as "Eat well, shit hard."

- In Norfolk, turkeys got little leather boots for Christmas, when they were driven to London and the New World.

- Tangent: Turkeys get their name because the first merchants to sell them were Turkish. However, nearly all the other countries refer to them as Indian. One Native American tribe calls a turkey a "Fukit".

- Note: Because it is Christmas, all the questions have a sacred theme.

- Saints who come from Ireland include St. Conleth, St. Brigid of Kildare and St. Kevin of Glendalough. St. Brigid's great miracle was that she threw a cape which grew in size, and built a convent on the land it covered. She could also turn used bath water into beer.

- Tangent: Alan thinks he looks like St. Bartholomew, but Stephen thinks he looks more like St. Sebastian. The picture that Alan saw frightened him a bit because he was wearing a nappy and had been shot with an arrow. St. Bartholomew's day is 24 August. He was flayed alive, thus resulting in paintings of him often showing his skin draped over his arm.

- The pointing fingers in "The Creation of Adam" were painted by an unknown Papal restorer because the original fingers fell off. (Forfeit: Michelangelo)

- Tangent: Alan has a picture of "The Creation of Adam" on his mobile phone, even though he was told he was not allowed to take any pictures.

- Tangent: Jo used to prank phone call a man in her phone book called "Mr. Bastard". Stephen also knows people who annoy the staff at Jesus College Cambridge by ringing them up and singing "Happy Birthday to You". Saint Nicholas comes from Turkey.

This was the 50th episode of QI made.

From the Series D Christmas Special, Stephen tells the panel the shocking similarities between Jesus Christ and the Roman sun god Mithras.