All the questions are themed on colours. With Jo Brand, Bill Bailey and Sean Lock.
Preview clip 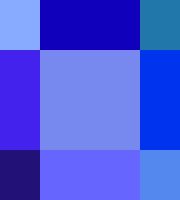 - Each panellist is given a bowl of Smarties.

- As it is Series B, all the buzzers are in "Blue". Bill has a harmonica, Sean has a guitar, Jo has a woman singing and Alan has the sound of a woman having an orgasm.

- The ancient Greeks thought the sky was bronze, because they had no word for "Blue". (Forfeit: Blue)

- Tangent: The word "Television" is a combination of both Greek ("Tele") and Latin ("Vision"). As a result, the word offends those who study classics.

- Tangent: Homer believed that wine, the sea and sheep were all red.

- You cannot see a rainbow from the other side. The sun has to be behind you, and reflects off the back of a raindrop at an angle of 42 degrees.

- Tangent: In Estonia, they believe that if you point at a rainbow, your finger will fall off.

- Tangent: Indigo is an Indian plant used for dying jeans and police uniforms.

- You should take the piss out of Newcastle because urine is used in fixing dye. It used to be Newcastle's third biggest export after coal and beer.

- Tangent: Alan talks about a friend at school who could urinate from the floor and into a high window.

- The food additive E120, also known as "Cochineal", is made using bugs. 70,000 are used to make one pound. It is bad for you if you are allergic to aspirin and it can make you hyperactive. Vegetarians have asked for it to be no longer used in food, however it still used to make red coloured Smarties. Red is the most popular colour for Smarties (such as the ones being eaten by the panel at the time).

- A new type of beetle is discovered at roughly one an hour. Since 1700, the rate has been no more than six hours. There are 2,000 coleopterists in the world and 10,000,000 species of beetle, making up around two-thirds of all insects. If all forms of animal and plant life were put in a line, every fifth creature would be a beetle. Every tenth would be a weevil.

- Tangent: Stephen and Bill used to be lepidopterists, which is someone who is interested in butterflies. Bill once had a large collection of butterflies, but moths got into it and ate his collection.

- Unlike camels and the Sultan of Brunei, a ptiliidae beetle is so small that it can pass though the eye of a needle.

- Two words rhyme with "Orange." Blorenge is a town in Wales which has a famous car park, which has a horse buried in it. Gorringe is a surname. Examples include Henry Honychurch Gorringe, who brought Cleopatra's Needle to New York's Central Park, and Stephen Fry's prep-school tailors. (Forfeit: Nothing) Correction: There is a third word that rhymes with "Orange". It is another surname ("Inge"). Examples include William Ralph Inge, a professor of divinity at Cambridge.

- The planet Mars is coloured brown. Some recent NASA photos were changed to make the planet look redder to fit people's expectations of it. (Forfeit: Red)

- Nothing prevented Henry VIII from marrying Lord Pembroke. It was a title he gave to Anne Boleyn. (Forfeit: Gay marriages were illegal)

- There are no green mammals. There is a kind of sloth which looks green, but it is actually algae growing over it.

- Most Australians call a prawn a "prawn" but in the famous Foster's advert, Paul Hogan puts 'another shrimp on the barbie', as this advert was made for the American market. (Forfeit: Shrimp)

- Tangent: The colour "Barbie Pink" is copyrighted by the Mattel Corporation, which makes the Barbie doll.

- Tangent: Prawns are like the maggots of the sea. They feed off effluent pipes.

- If 2,000 coleopterists discovered four new species of beetle per day, it would take them three-and-a-half years to discover 10 million species.

- At a temperature of 400 degrees Celsius, bombardier beetles squirt a mixture of hydroquinone and hydrogen peroxide out of their arses.

- Tangent: Jo asks if there is any point in knowing any of information given to her in the programme. Stephen responds by saying that it tends to be those who say, "What it is the point of learning something" who tend to end off worse in life.

- A pooter is a device that allows someone to catch a beetle without touching it. It consists of a glass tube with a small spout and a length of rubber tubing. You cover the beetle with the spout, suck the rubber tube, and that sucks the beetle into the glass tube.

What use is a coleopterist without his pooter?