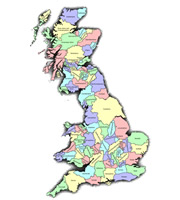 - Tangent: The word "Map" comes from the Latin word "Mappa", meaning "Napkin", because maps used to be drawn on them.

- A 'Carlisle surprise', a 'reverse Canterbury pleasure' and a 'Sheep tied to a lamppost in Cardiff' are types of "Changes" in bell-ringing.

- Tangent: John Bunyan denounced bell ringing, along with dancing, playing tip-cat and reading the history of Sir Bevis of Southampton.

- The last place in Britain to convert to Christianity was the Isle of Wight in 686 AD. It was forced to convert by Cædwalla, King of Wessex, who had to kill most of the pagan population to convert it. (If Alan got this question right, he would have been given 100 points, but Bill got it.)

- Tangent: The grey squirrel has not yet made it to the Isle of Wight.

- Because it is a non-Newtonian fluid, not only Jesus, but anyone can walk on custard.

- Naming the teams at the Colosseum: there is no evidence to support the idea that Christians were throw to the lions. (Forfeit: Lions v Christians)

- In the Middle Ages, most people thought the world was a sphere. Christopher Columbus thought it was pear-shaped. (Forfeit: Flat)

- A "Taffy pull" is a form of toffee made by pulling strings of it along metal hooks. It takes two people to make it, so people who often meet at taffy pulls in the USA. (Forfeit: Welsh chat-up line)

- Tangent: Salt water taffy contains no salt water in it. It is named by an Atlanta shopkeeper whose stock was covered by sea water. Correction: Atlanta is a landlocked city, nowhere near the sea. It was invented in Atlanic City, New Jersey.

- The sheep, like all the other clean beasts, went onto Noah's Ark in sevens, with two of every un-clean animal also going on board. So there are either seven or fourteen sheep. (Forfeit: Two)

- The archbishop murdered by Henry II was Thomas Becket. The "à" is a complete error. (Forfeit: Thomas à Becket)

- Honolulu is the capital of the island of Oahu and of the state of Hawaii. It was discovered by Captain Cook in 1778. It is 1,390 miles long, because any island in Hawaii which is not named or that does not belong to a county is classified officially as being part of Honolulu.

- Tangent: The panel discuss what they think is the gayest, and the most limp-wristed animal.