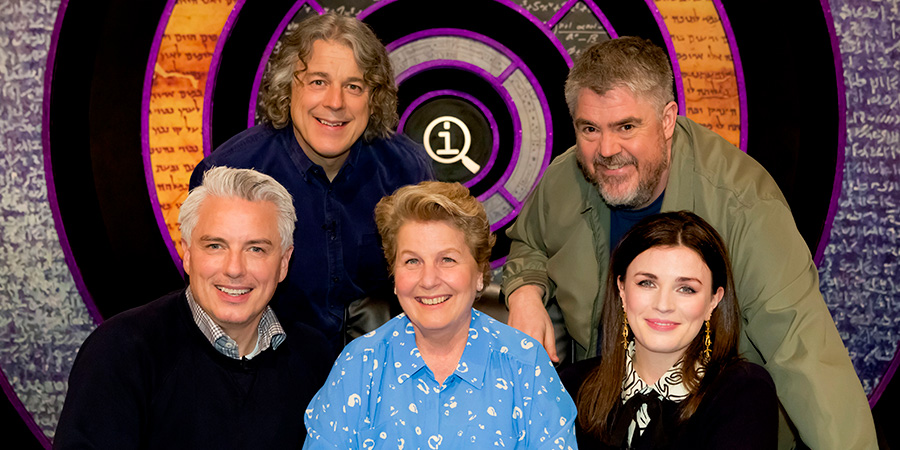 The show has now reached the letter R, and begins with a rather Rude episode. Joining Sandi are John Barrowman, Phill Jupitus, Aisling Bea and regular panellist Alan Davies.

- The panel are asked to name something so rude that you cannot say it on a BBC comedy show. Phill goes into a string of expletives, leading to a test-card going up and a message saying: "Please stand by". After a few seconds it goes away and Sandi rephrases the question: Name something that you can say on a BBC comedy show now, that you couldn't say in the 1950s. You can say "fuck", but only it is cleared by BBC management first. In the late 1940s, the BBC Variety Programmes Policy Guide for Writers and Producers, more commonly known as the Green Book, listed what was acceptable to broadcast. There were absolute ban on jokes regarding, "lavatories, effeminacy in men, immortality of any kind, and suggestive references to honeymoon couples, chambermaids and fig leaves." Something else that must be avoided was vulgar use of the word, "basket" and suggestive references to ladies underwear. It conceded that, "references to Noah were sometimes permissible", but added that: "Since there is seldom anything to be gained by them, and since they can engender much resentment, they are best avoided altogether." You could not also make jokes about solicitors, miners, the working class, and a specific Irish family called the MacGillycuddys of the Reeks, an ancient family that was the subject of several jokes to which the family took offence towards.

- Tangent: When Alan started doing BBC radio in the 1990s, the BBC had a list of eight words that could not be said. However, the only thing he really got into trouble for was blasphemy.

- Tangent: In 1944, Max Miller, told a story about meeting a rather attractive woman on a mountain pass that include a line saying that he didn't know whether to, "block her massage or toss himself off". For this joke, Miller was banned by the BBC for five years.

- Tangent: The first song banned by the BBC was My Little Ukulele in my Hand by George Formby in 1933. The BBC considered him a repeat offender, with the corporation describing him as: "our old friend". John remembers being BBC-trained for presenting and being told: "You can say it on air, as long as it is in a medical book." This leads to Phill impersonating Formby, singing: "Oh, I'm absolutely riddled with chlamydia." Another censored singer was music hall performer Marie Lloyd, who was told to change her song She Sits Among the Cabbages and Peas. She changed it to She Sits Among the Cabbages and Leeks.

- Tangent: In the film Mrs Miniver there is a scene where an actor jumps into bed in his pyjamas just after he's got back from helping the rescue at D-Day, and as he jumps into the bed his penis falls out of his pyjamas. For some reason, the editor missed this, the scene was not cut out, and the penis still appears in the film. Aisling did an acting job recently, and actors have to say what kinds of nudity they are OK performing. Her agent texted her that she had to tell the producers the next day, and Aisling could only text her what to put into the contract, which was: "Boob, no nip. Top of crack, fine. Bottom of crack, no." The agent printed out the text and framed it for Aisling.

- Tangent: The world record for catching the most shuttlecocks with chopsticks is 54 in a minute.

- The thing that thinks it is attractive to stand in front of a female and shout in her face is the white bellbird (Procnias albus). It lives in the Amazon and has the loudest call in the avian kingdom. Singing a single note like a fog horn, from a metre away it averages 116 dB, the same as a rock concert. When the male finds a likely mate, they land on a branch, swivel their body face-on, bray into the female's face, and if the female likes it they will mate.

- Tangent: The highest John seems to be able to sing is B flat, which he does by singing the word: "Shuttlecock" loudly at Aisling.

- The person whose genitals are seven feet longer than they used to be belong to the Cerne Abbas Giant, also known as the Rude Man of Cerne or the Old Man of Cerne. This is the 200-foot tall chalk carving in Dorset of a naked man holding a club. Originally his penis was just 16ft long, which when taking things into scale is about average for a man. However, in 1908, for unknown reasons his penis and belly button were merged together, making his penis seven feet longer. We don't know the age of the giant. A survey of land in 1617 has no mention of him, but references start to appear in the 1760s, with an article in a 1764 edition of The Gentleman Magazine including drawings and measurements. We don't know why it was created, but it is possibly a parody of Oliver Cromwell and dates to the Civil War. In 1921, a campaign from a Mr. Long in Gillingham tried to cover the giant's genitals with a huge fig leaf. Two local bishops supported him, and while the Home Office considered the idea, nothing was done. (Forfeit: Mine)

- Tangent: Aisling says that when she looks at the giant, she thinks it looks more like a shy little girl in pigtails licking a lollipop.

- The people who are always a little bit late are the Danes. There are 50 or more labs in the world which all run on atomic clocks, which measure the vibration of cesium atoms. One second is defined as the time it takes for a cesium atom to vibrate 9,192,631,770 times. Each clock around the world sends all of its data to the International Bureau of Weights and Measures in Paris, who collate it. The process is called Coordinated Universal Time, and it is used throughout the world, except in Denmark, where the laws were never updated. Denmark instead uses Mean Solar Time, which means that they are a quarter of a second later than everyone else on Earth.

- Tangent: Coordinated Universal Time's acronym is UTC, because in French the phrase would be "temps universel coordonne" or TUC, and because they couldn't agree on either CUT or TUC, they went with UTC as a compromise.

- Tangent: The reason we have 60 second and 60 minutes is because the number 60 can be divided by 12 other numbers. This can be dated back by 4,000 years to the Babylonians.

- The panel are drawings of five faces, each time the faces becoming more anxious looking, and are asked what comes next. The answer is a drawing of the face vomiting. This is "BARF" - "Baxter Animated Retching Faces" - and is used to help children explain how nauseous they feel, because they have difficulty explaining how they feel in words. BARF is based on a similar scale called the Wong-Baker Scale, which is used for pain.

- An example of a body part this is built only for pleasure is the nucleus accumbens. While it was thought that the clitoris was purely for pleasure, we now know the clitoris informs the brain that it is time to create the very best swimming conditions for sperm. The nucleus accumbens is the part of the brain that activates when we feel rewarded in some way, and fires dopamine into the body. (Forfeit: Clitoris)

- The country's whose national poem begins with the words: "O Lithuania", is Poland. Adam Mickiewicz wrote the poem and the opening verse begins: "O Lithuania, my country, thou / Art like good health I never knew till now / How precious, till I lost thee." The reason for mentioning Lithuania is because Poland and Lithuania were once part of a joint commonwealth. (Forfeit: Latvia; Estonia; Lithuania)

- Tangent: The country with the world's longest national anthem is Greece, which has 158 stanzas, but normally only two are sung. Meanwhile the Congo's national anthem asks: "And if we have to die does it really matter?"

- If you can smell burnt toast, then it means that someone is burning toast. The idea that it means you are having a stroke is a total misconception. "Phantosmia" is when you think you can smell something but there is nothing to smell. Strokes do not affect your sense of smell. (Forfeit: Having a stroke)