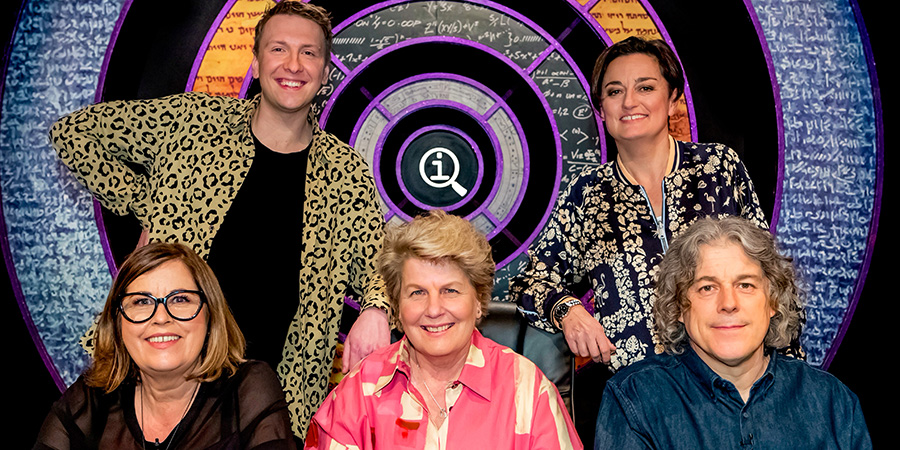 Sandi Toksvig asks questions on the theme of reflections this week, with Joe Lycett, Zoe Lyons, Liza Tarbuck and Alan Davies trying to come up with interesting answers - while avoiding the most obvious ones.

The set is reflected, with the "i" in the middle of the studio facing backwards, and Alan sitting on Sandi's left-hand side rather than her right.

- Sandi asks why mirrors flip you side to side but not upside down. The answer is that they don't. The mirror does nothing. It is you that makes things appear differently in mirrors. Sandi demonstrates this with an experiment. She gets Joe to write the word "BOSS" (as in Hugo Boss), on a piece of card and then on a piece of glass. Sandi shows the card to camera, which has the word "BOSS" written correctly, but when she turns that card so it faces a mirror, the word is reflected backwards. It was Sandi however who turned the card around. The mirror did nothing. When Sandi takes the glass and holds it to camera, the word "BOSS" is written correctly, and in the mirror is appears correctly too. She has not turned the glass around, hence why it appears correctly both times.

- Tangent: Each panellist is given a hand mirror and is told to hold it quite close to their face. They are then told to look at one or the other of their eyes in the reflection. If they then transfer their gaze to the other eye they will not see their eyes move, but someone else watching you will see them move quite clearly.

- The panel are shown a picture of a cleaner wrasse fish and are asked that it can do that a baby can't. Aside from the obvious fact that the fish can stay alive underwater (the idea that babies have a natural ability to swim is wrong), the answer is that the fish can recognise itself in a mirror. The cleaner wrasse is the first fish to pass the mirror test. This test involves marking an animal in a place where it can only see the mark in a mirror, and the animal passes if it can recognise that the mark is on itself rather than on the mirror. Cleaner wrasse make a living cleaning other fish, by setting up stations for fish to come and be tidied up. They work for about four hours a day, cleaning about 2,000 "clients". All the fish that are cleaned end up living longer and are smarter because they no longer have parasites. It should be said however during the test that it is possible that the wrasse are signalling to other fish that it needs cleaning rather than seeing the mark on itself. Babies meanwhile don't recognise themselves in mirrors until the age of two.

- Tangent: Other animals that pass the mirror include most great apes, but not gorillas. Most animals, when they discover a mirror for the first time, will first look behind it to see if there is an animal behind it, then will do funny movements, then will look at parts of their bodies that they have not been able to see before. Alan says he is surprised that there isn't more mirrored seating, and says he would have mirrored urinal and shoot at himself with it. Sandi complains about men having, "an aiming device that doesn't seem to work!" Joe says that his does, because there is a pub in London where there is a game in the urinals, where you try to hit sensors in the urinal. Joe got the top score, but didn't want to put his name down, so wrote the name: "Adrian Chiles".

- Sandi asks how she can make the panel write like Leonardo da Vinci. He wrote in mirror writing, so the panel write their names on a piece of paper under the desk. Alan and Joe can write their names correctly, Zoe is half-right (having an "o" helped) and Liza wrote her name backwards. Joe being left-handed however helps him, and Leonardo was left-handed to. No-one knows why he wrote in mirror-writing, although the most common reasons given are for either privacy or his own amusement. Sandi's son is left-handed and he thinks it might have just been more comfortable for Leonardo to write like that. There is also the problem that if you are left-handed and write left-to-right, you smudge the ink.

- Tangent: A couple of tests are run on the audience to demonstrate how people forget the configuration of objects. When asked in which hand the Statue of Liberty holds her torch, most of the audience wrongly say that it is in the left hand, when in fact it is the right. They are then shown four representations of the low-case letter "g" and most fail to guess the right style.

- Tangent: While there is a theory that people with more symmetrical faces are more attractive, this idea appears to fail when the panel are all shown pictures of themselves with symmetrical faces, with the left side first reflected and then the right.

- Back in the day, the problem with watching snooker in a mirror would be the fact that mirrors were really bad at showing differences in colour. While strong, bright colours are dimly distinguishable, subtle colour distinctions were difficult to reflect. The earliest mirrors were made out of obsidian - volcanic glass - and this was before silver could be put on mirrors. John Dee, Elizabeth I's astrologer, and his assistant Edward Kelley, used an obisdian mirror for scrying - a device to predict the future. The technology for silvering mirrors as we know them today did not come about until 1835. Before then, if you put hot metal on glass, the glass would break. Thus, most people before the mid-19th century had very little idea of what they looked like.

- Tangent: In football, there was a rule that in international matches you could not have teams with one side in red and other in blue, because in many developing countries where colour TV had not yet reached, they could not tell the different between the two teams.

- Scientists know how far away the Moon is because there are mirrors on it. There are five mirrors on the Moon. Three were placed there by US Apollo astronauts, and two by unmanned Russian missions. The first mirror was placed there by Neil Armstrong and Buzz Aldrin. These mirrors were used for 40 years to measure the distance between the Earth and the Moon by firing lasers from Texas and timing how long it took for the lasers to bounce back. We therefore know that the Moon is travelling away from us by about 3.8cm per year. The accuracy of this laser is comparable to using a rifle to hit a moving penny two miles away, or measuring the distance between New York and Los Angeles to the nearest 0.25mm.

- The best way to pull the pin out of a grenade is with your hands. The pin is bent so that you cannot pull it out accidentally, and thus amount of force that you need to pull it out is between 3-5kg at least, which is enough to break your teeth. (Forfeit: With your teeth)

- Tangent: If someone throws a grenade at you, the best thing you should do is run away. If you try to throw it back, the chances are the grenade will explode before you get a chance to return it. Grenades tend to explode 3-5 seconds after the pint is removed.

- If you have a bump on your head and you wake up with Foreign Language Syndrome, you end up talking in a accent that is different to your own, rather than an entirely different language. Sufferers have included George Michael. In 2012, he had pneumonia, went into a coma, and when he woke up he had a West Country accent. During World War II, a Norwegian woman called Astrid L was hit in the head by shrapnel during an air raid, which resulted in her getting a German accent, as a result of which she was ostracised by other Norwegians, because they thought she had been associating with the occupying Germans.

- Tangent: Joe recalls an episode of This Morning where someone talking about having an organ transplant and afterwards they ended up liking vacuuming.