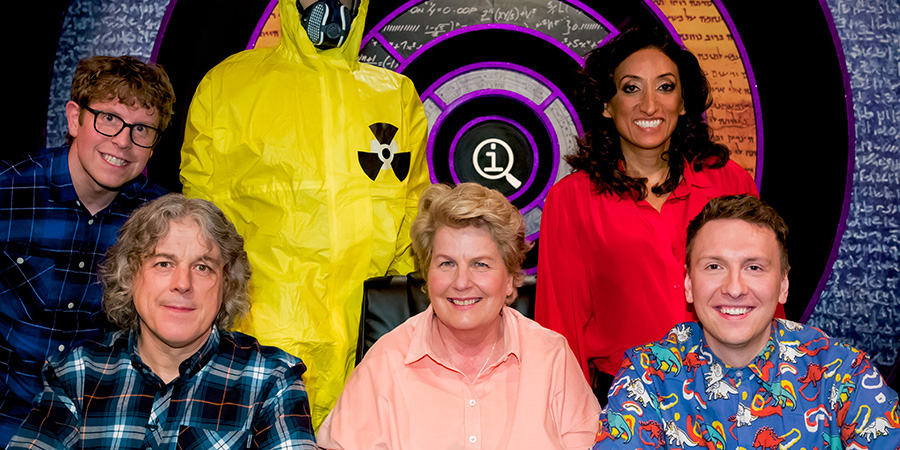 Sandi Toksvig asks questions on the theme of radio this week, with Joe Lycett, Shazia Mirza, Josh Widdicombe and Alan Davies trying to come up with interesting answers - while avoiding the most obvious ones.

- The member of the panel who encountered a lot of radioactive material as a child is Josh. He comes from Dartmoor, and houses there have radon detectors. The middle of Dartmoor is the worst place in the country for radon. In the UK, most radiation that the public receives comes from radon and thoron gases. Meanwhile Birmingham, where Shazia and Joe come from, is an island of low radiation. Essex, where Alan is from, is also low risk. The reason why Dartmoor has such high levels of radiation is because the ground rock is mostly granite, which contains small amounts of uranium, which decays and produces radon. You can be exposed to as much as seven millisieverts of radiation per year in Dartmoor, the same as a CT scan, 85 transatlantic flights, or 70kg of Brazil nuts (the nuts contain lots of radon because the plants have deep roots).

- Tangent: Josh and his family would go on canal holidays to Birmingham. His father said that Birmingham was best for a canal holiday because it has more canals than Venice, which implies that he at least considered Venice.

- One of the ways to sell a house right next to a nuclear power plant is for the publicity photo of the house to be taken without the plant in shot. In 2009, three-bedroom cottage in Kent was advertised with photo as if the house was away from anywhere, but the estate agent failed to mention that if you stood behind the house you would see that the cottage is just 100 yards away from Dungeness Nuclear Power Station, one of Europe's largest nuclear power stations. When asked about it, the estate agent said: "The thing is, anywhere on Dungeness is close to the power station."

- The ray that changed the world of fashion forever was x-rays. In the mid 19th-century, women wore heavily boned corsetry, some having more than 100 whalebones, and there was concern about how these corsets affected the health of women. In 1908, French doctor Ludovic O'Followell took x-ray photos of women in corsets and wrote a book called Le Corset which showed the women's ribs were being displaced by Victorian corsets. Thanks to his work, fashions changed.

- Tangent: X-rays were discovered by Wilhelm Conrad Roentgen. The first x-ray he took in 1895 was of his wife's hand, which showed both the bones in her hand and her wedding ring. When Mrs. Roentgen first saw the photo she said: "I have seen my death." Roentgen won the first-ever Nobel Prize in physics. X-rays, still called Roentgen rays in Denmark, sparked a "Roentgen mania", with 50 books published on x-rays in a single year, plays were themed on x-rays, newspapers advertised x-ray-proof underwear for women, and Thomas Edison created a "fluoroscope" where you could see your bones on screen. However, the following year they discovered just how dangerous x-rays were, with 23 cases of severe x-ray injury being reported in scientific journals, but despite this x-rays were being used for decades to cure illnesses including cancer, tuberculosis, acne and ringworm. They said x-rays could remove unwanted body hair, which it did, but it also left patients ulcerated and bedridden.

- Tangent: The panel comment that the ring in the first x-ray looks like an Oreo, leading to Alan to say that he finds it irritating when children take apart an Oreo or Bourbon to eat it. Josh says the problem might with Alan rather than his children.

- The defining characteristic of Nazi toothpaste was uranium and thorium. In 1944, a German chemist in occupied Paris has been tracking down stocks of uranium and thorium, and sending it back to Germany. There was a fear that the Germans were about to develop their own nuclear weapons, so a team of spies collectively known as Alsos were tasked of discovering what the Nazi's nuclear plans were. They discovered that the material was being stockpiled by a German company, hoping to gain a post-war monopoly on radioactive toothpaste. Doramad Radioactive Toothpaste was advertised as making your teeth shine with radioactive brilliance.

- Tangent: Shazia says that Sandi at some point must have mixed up haemorrhoid cream with toothpaste, but Sandi says she has never had haemorrhoid cream. Josh had a suspected haemorrhoid, and he had to have an over-the-phone consultation with a doctor. He was embarrassed by his condition, and to make things worse at the end of the conversation the doctor said: "Um... are you the comedian Josh Widdicombe?" Similarly, some asked Sandi if she was Sandi Toksvig while she was in the middle of a colonoscopy. Sandi also tells the audience that you don't need a colonoscopy if all you have had is beetroot. Joe meanwhile went to see his GP for a haemorrhoid, and while waiting he sat next to an elderly lady who said to him: "You're that comedian aren't you. I keep thinking I see famous people around here. I thought I saw the Pope in B&Q." As they talked Joe came up with a euphemism to describe his condition, and as it was around Christmas he said: "I'm growing a little cranberry," to which the lady said: "Oh, how festive."

- Tangent: Other radioactive products that you could buy included the Revigator, a water jug lined with uranium ore which gave off radon gas, that claimed to, "bring back that lost element of original freshness - radioactivity." There was also the Magic Radium Massage, to be rubbed into the male sexual organs,"for firmness and strength and a pink, healthful appearance." At first, when your body is exposed to radiation it begins to fight it and you get a short-term high, but obviously the long-term effects are horrible.

- The man who is credited with inventing radio really wanted to hear the Sermon on the Mount. Guglielmo Marconi, who is the pioneer of radio although the actual invention is responsible due to the output of many people, had a theory that sound never died, it just got weaker and weaker. Thus, near the end of his life he hoped to discover the right apparatus to be able to detect all sounds ever made, and he hoped to develop the apparatus that would allow him to hear Jesus delivering this sermon. However, sound waves are gradually absorbed by air molecules till they're no longer audible.

- Tangent: Before she was a comedian, Shazia was a science teacher. She says that all her pupils did well and all graduated from Feltham Institute for Young Offenders.

- Tangent: Marconi got his first wireless patent at the age of 22, had no formal education in science, and was aided by a series of tutors and man servants. Marconi's first transatlantic message depended on a device called a coherer, which seems to be have been based on an un-patented design by a Bengali-Indian physicist called Jagadish Chandra Bose, who has been demonstrating wireless telegraphy two years before Marconi managed it. However, Bose was not allowed to work in a lab because of his race, so he made a makeshift lab at home. The first ever transatlantic transmission was from Cornwall to Newfoundland. Many people thought it was impossible due to the curvature of the Earth, but the ionosphere causes radio waves to bounce. Marconi however did not know why it worked. In 1909, he won the Nobel Prize and in his acceptance speech he freely admitted he had no idea how many of his inventions worked. In later life however, Marconi fell in with Italy's fascists. When he died in 1937, the largest wreath he got was from Hitler. Half-a-million people lined the streets for his funeral, and to commemorate his death radio stations in Italy and even the UK, USA and Canada all held a minute's silence.

- The panel are shown a male action toy doll with no genitalia and are asked where he keeps his radio transmitter. The answer is in a fake scrotum. During the Cold War, the CIA developed a radio hidden in a fake scrotum. It was designed for pilots who might be captured and searched, and would go over your actual scrotum. However, you had to put it on one testicle at a time. Although built and tested, it was never used in the field. You can see the scrotum radio in the International Spy Museum in Washington DC, which also displays a tool kit with ten different drill bits, saws, knifes etc., that could all fit into a canister which is small enough for you to hide in your rectum.

- The busiest man-made waterway in the world is the Kiel Canal in Germany. It cuts across the northern state of Schleswig-Holstein (which Sandi says part of which should belong to Denmark). In 2018 more than 42,500 ships passed through it, as well as 20,000 yachts and private motor boats. It was originally built as a way for German ships to avoid Denmark. (Forfeit: The canals of Birmingham)

- If you are pregnant, the best way of inducing labour is to stimulate your nipples. Several myths about inducing labour, including eating curry, walking and having sex, have all been debunked. However, according to one study, women whose nipples have been stimulated by being rolled between the fingers for between 1-3 hours a day, one at a time, are 33% more likely to go into labour within 72 hours. The same study also says it reduces the risk of heavy bleeding after delivery by 84%. (Forfeit: Voting for them; Curry)