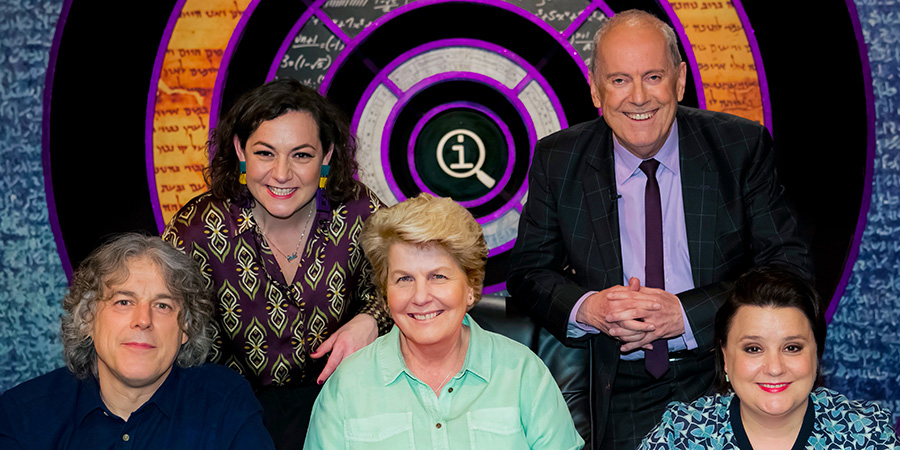 Sandi Toksvig quizzes the panel on a few revolutionary ideas, with Alan Davies, Gyles Brandreth, Susan Calman and Jessica Fostekew going round the houses trying to come up with a decent answer.

- The panellist's buzzers are all songs. Susan has I Predict a Riot by the Kaiser Chiefs; Jessica has Children of the Revolution by T. Rex; Gyles has Anarchy in the U.K. by the Sex Pistols; and Alan has You Spin Me Round (Like a Record) by Dead or Alive. Gyles once met Johnny Rotten in the 1980s at the Midland Hotel, Manchester. Gyles went up to him, said: "I'm so delighted to meet you." Johnny replied: "Fuck off."

- Sandi tells the panel to stop her when they recognise what the following names are a list of: Patriotic Shortener, Silence Mill, Regretful Climb, Fanlight/skylight, Charlie's Seesaw, Necktie of Capet, and Half-moon. These are all nicknames given to the guillotine, translated in English. The guillotine was invented by Dr. Guillotine as a more humane, fairer way to execute people. His family hated being associated with the name and constantly asked the French government to change the guillotine's name. In the end, the family changed their own name. It is not true that Dr. Guillotine was himself guillotined. He actually died from an infection on a carbuncle on his shoulder.

- Tangent: In 1977, Gyles was in Paris to witness the last use of the guillotine, as he was a campaigner against capital punishment and had went to protest.

- Tangent: The first person to use a guillotine was Charles-Henri Sanson, who was Louis XVI's executioner. Sanson was the fourth out of six generations of executioners, and he himself executed nearly 3,000 people. He was a celebrity at the time, and his uniform consisted of striped trousers, a fancy hat and an overcoat. This look became very fashionable at the time. Meanwhile, women wore guillotine-shaped earrings with tiny royal heads dangling from them. Sanson planned to hand his job down to his eldest son, Gabriel, but Gabriel died while helping his father with an execution, by slipping on some blood and falling off the scaffold. Gyles says this didn't feature at all in Carry On Up The French Revolution (the film's actual name is Don't Lose Your Head). Alan says he wants to watch it again but the Carry On films are never show, but Susan says they do get shown on ITV2 [NOTE: They are actually shown on ITV3, with the exception of the early films in the series which are shown on Film4. QI has yet to correct this fact]. Gyles says he does a commercial for the channel the Carry On films are shown on, namely for the Tena Flex Plus super soft incontinence pad.

- Tangent: Perhaps the one woman most associated with the French Revolution is Madame Tussaud. She was an art teacher and waxwork modeller to Louis XVI's sister. Thus she was seen to be a royalist, had her head shaved in preparation for execution, but was saved by a leading revolutionary who has been friendly with her before. She was thus forced to make the likenesses of people. She was invited to Britain to do show her work, and was going to go back to France, but had to stay in Britain because the Napoleonic Wars had started. To illustrate this question, a photo is show of the models Tussaud made of the heads of Louis XVI and Marie Antoinette.

- Tangent: Gyles has a family connection to beheading, as one of his ancestors, Jeremiah Brandreth, was the last person in Britain to be beheaded for treason, in 1817. Jeremiah, aka the Nottingham Captain, was a Luddite and later a revolutionary, a member of the Pentrich martyrs, and he led a revolution in Derbyshire. He was arrested, put on trial, and was both hanged and beheaded. The show tries to see if there is a family likeness by taking a drawing of Jeremiah and Photoshopping Gyles into it.

- If someone read you the Riot Act, you would not need to do anything. Police officers no longer read the Riot Act to rioters. Originally introduced in 1715, if the Riot Act had been read out, you had one hour to disperse, and if not then lethal force could be used. The Riot Act meant that if more than 12 people gathered and were disruptive, a police officer was entitled to read them the act, with the exact correct wording. The Riot Act however was repealed by the Criminal Law Act of 1967. The last attempted reading of the Riot Act was in Glasgow, in 1919, but the police officer could not finish reading it in time, and someone took the page from his hand.

- Tangent: Gyles tried to take part in the 1968 Paris Riots, but he didn't know what to do. The more experienced rioters told Gyles and his friends to know off the hats from police officers. This reportedly is how riots are normally started, and has been practice for hundreds of years.

- Most houses don't have revolving doors because most houses are not big enough and don't have enough visitors. One of the few houses that does have revolving doors is Gyles', because the inventor of the revolving door, Theophilus Van Kannel, married one of the daughters of Gyles' three-times great-grandfather Dr. Benjamin Brandreth, a medicine and advertising pioneer. Dr. Brandreth had 13 children, including 10 daughters, who he married off very well. He was also a friend of P.T. Barnum, who in turn was a friend of Van Kennel. Revolving doors are good in tall buildings because they let much less air into the building and avoids the "chimney effect", where cold air is sucked in at the bottom and causes warm air to rise up through the building. Revolving doors are also more energy efficient, but people tend to prefer swing doors.

- Sandi says she will give a panellist ten points to gamble on a roll of a roulette wheel. The last five spins were 6, 31, 6, 6, and 4, which are all black. Despite this, there is no point going to bet on red, because the idea that red is "due to come up" is false. The odds are the same on each turn of the wheel, slightly less than 50-50, because the 0 and 00 don't count as either red or black. Despite this, if it has come up black five times in a row, 85% of people will bet on red.

- Tangent: Susan says that this fact means that there is no point in wearing her lucky pants. Susan has banned herself from casinos, because the first time she went into one she went in with her first credit card, and she ran up £10,000 in six hours. Gyles only played roulette once, in Barbados, where he and his wife went for their anniversary. They were on the beach when they spotted, "this little old wizened lady",. It was not until they were very close that they realised this it was actually Mick Jagger. Gyles discovered that Mick was a big fan of Countdown, so they all went to a casino, where Mick gave Gyles some chips to play with on the roulette wheel. Gyles lost, but Mick wasn't bothered.

- Roundabouts are so un-British because they were invented by the French. Unsurprisingly, the story involves another of Gyles' ancestors, this once being married to Napoleon III. When Napoleon III was in exile, he lived in Southport. When he returned to Paris and was restored as emperor, he decided to redesign Paris and based his plans on Southport. He appointed a man named Haussmann to do it, from whom the Boulevard Haussmann in Paris is named after. The original roundabout, aka a "carrefour giratoire", was created by French town planner Eugene Henard. In 1907, British researchers were sent to observe it, and the first round about in Britain was opened in Letchworth new town. This was opened by Ernest Marples, Transport Minister in the 1950s-60s, with help from a legal advisor to the AA - who just happened to be Gyles' father.

- Tangent: Jessica says that before the show started that Gyles told her that the key card for her dressing room also works on the London Underground.

- If you are in a chip shop, then you can put on your fish and chips some salt and non-brewed condiment. This is the legal label of what we wrongly call vinegar in chip shops. It is not only illegal to call it vinegar, it is illegal to hold it in a receptacle that would usually hold vinegar. The non-brewed condiment is actually a combination of water, ethanoic acid and flavourings, which is watered down even further to be served to customers. This is cheaper than vinegar, takes less time to make, and can be made in concentrated form. However, shop-bought vinegar is actual vinegar. (Forfeit: Salt and vinegar)

- Tangent: In Edinburgh they have salt and "chip sauce", while in Glasgow they have the normal salt and 'vinegar' because to quote Susan, "we're classy".

- The battle technique of blitzkrieg was invented by the British. Blitzkrieg ("lightning war") was very rarely used by the Germans. It was not used by the German leaders when the blitzkrieg actually happened during the invasions of Poland and France. Hitler called it, "a completely idiotic word." The success of blitzkrieg completely surprised the Germans, and they thought it was a miracle. During blitzkrieg, there are short, sharp attacks on the ground with armoured vehicles, with air support coming from behind. The idea had been evolving since World War I. The British and American press credited the invention of blitzkrieg to General Heinz Guderian. (Forfeit: Germany)