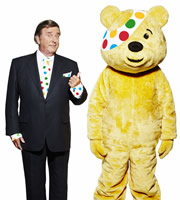 - A selection of old wives tales:

- Terry's grandmother used to say that "Love flies out the window when poverty walks in the door", and "It doesn't matter whether you rich or whether you are poor, as long as you have money".

- Eating your crusts puts hairs on your chest.

- Artists and composers have helped children in need in the 18th century. A foundling hospital which cared for children, founded by Thomas Coram, got much of its money from composer George Frideric Handel and artist William Hogarth after Coram badgered them for ages. The hospital was so successful that the only way you could get your child in was by a lottery. There was a bag of balls and you drew one of them out. White balls allowed you in straight away, red balls meant you were on a waiting list and black balls meant you could not go in. In 1756, the government said that all children should be allowed in.

- Tangent: Terry claims that while the last Children in Need raised around £35 million, in order to make a real difference, it would need to raise £150 million.

- Tangent: When asked when she was hungry, Ann Widdecombe said, "Hungry? I'd eat a baby's arse through a wicker workchair."

- Newborn babies do not develop a relationship with their mother straight away. Babies respond just as much to the cries of a rhesus monkey as to their mother. However, babies do eventually get used to the smell of the mother and then the relationship forms.

- Tangent: 90% of the attention you garner in your life you receive under the age of three.

- The call of Tarzan is an aural palindrome. If you play it backwards, it sounds the same. The line "Me Tarzan, you Jane", never appears in the films.

- The Eurovision Song Contest has made Europe a better place because the 1974 Portuguese entry, "E depois do adeus" by Paulo de Carvalho, was the signal to start the Carnation revolution, which overthrew the right-wing dictatorship that had run Portugal for over 40 years. The song itself came second last, scoring just three points.

- Tangent: Terry keeps arguing that the entry was from 1975.

- Tangent: António de Oliveira Salazar, the dictator of Portugal, suffered a stroke in 1968. He was replaced as ruler, but was never told. He went to the grave thinking that he was still ruling the country. He never declared his government fascist, but he did give three days national morning after Adolf Hitler died.

- Tangent: You do not have to have lived in a country in order to represent it in the Eurovision Song Contest. Canadian Celine Dion won for Switzerland, while Australian Johnny Logan sung and won twice for Ireland. Logan's father, Patrick O'Hagen, was Irish. He used to sing in a very high voice all of the time while winking roguishly, according to Terry.

- The family in Swiss Family Robinson have no surname. The title is a reference to the fact it is a Swiss family having a Robinson Crusoe experience. A third of all film and TV adaptations do mistakenly call the family "Robinson". (Forfeit: Robinson)

- You call a boomerang that won't come back a "Kylie". They are not named after Kylie Minogue. Returning and non-returning sticks are both used by Aborigines, in order to trap birds and drive them towards nets, not to kill them. (Forfeit: A stick)

- As mentioned in Series A, the word "Kangaroo" comes from Guugu Yimithirr language. English explorers used the word to other tribed who spoke other langauges, and did not know what they were talking about. (Forfeit: Aborigine for "I don't know")

- The panel are shown a piece of mathematics, written in symbolic logic. Created by Bertrand Russell, it proves that 1 + 1 = 2. It appears in his book Principia Mathematica after set theory created several paradoxes, causing fears that nothing could be proved and that some of the great questions could never be answered.

- Tangent: Bertrand Russell was said to have suffered from bad breath and to have been bad at mental arithmetic.

This special is the final episode of QI to be shown originally on BBC Two.