This episode contains clips that were cut out of the rest of Series E.
Preview clip 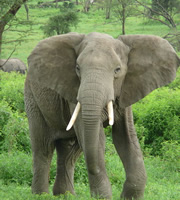 - The beginning and end of the episode features Stephen as Father Christmas and a shrunken-down Alan sitting on his lap.

- Eating: The correct Neapolitan way to eat spaghetti is to lean back and drop it into your mouth by hand.

- Exploration: Explorers in Polynesia and Micronesia used wave maps to navigate by sea. It uses the scrotum, the most sensitive part of the body - if you put it into the water you are able to tell which way the waves are coming from. You can then use the waves and the map to tell where the islands are.

- Europe: The largest banana republic in Europe is Iceland. It produces more bananas than any other European country, using geothermal heat. The biggest exporter of bananas in Europe is the Republic of Ireland. The country buys the entire banana crop of Belize and exports it on.

- Tangent: Alan's step-grandfather worked at Stratford fruit and veg market. He used to do long shifts and so slept with the bananas because it was warm. He was stopped by the unions.

- Engineering: In order to use an ejector seat in a helicopter, you have to fire the rotor arms away. Amongst the helicopters that use this system is the Black Shark. 7,000 people have been saved due to ejector seats.

- Eating: The most expensive meat in the world is a manufactured meat using stem cells called "Myoblasts". These cells can multiply so many times that in theory they can produce enough meat to feed the entire world. Currently, one kilogram costs $10,000. Winston Churchill predicted in 1932 that in 50 years, people would just manufacture meat rather than keep the whole animal. In a way, his prediction was right. (Forfeit: Japanese beef)

- England: There is a counting system called "Yan Tan Tethera", used in counting sheep. The system only goes up to 20. Number 15 is "Bumfit".

- Entertainment Tangent: Alan and Bill Bailey did a play at the Edinburgh Fringe where they shared the stage with some Korean ballerinas. The floor was sprung for the ballerinas, so as a result everything on the stage shook.

- Tangent: Stephen saw Peter Brook in The Tempest at the RSC. As a joke, Brook was naked under his coat. During a scene in which some actors had to make a human pyramid, Brook opened his coat. The woman on top of the pyramid urinated with laughter. The urine dripped down the pyramid and off the stage.

- Eyes and Ear Tangent: "Wheelie trainers" and Stephen's toys as a child, including a spacehopper he had when he was eight.

- Everything, Etc. Tangent: Polar bears are not attracted to the colour black because they are colour-blind. Jeremy Clarkson claims they are the ugliest animals in the world. Alan correctly remembers how to escape a polar bear from Series A - walk back slowly, offering clothes.

- Empire Tangent: Stephen attempts impersonations of David Frost, Lloyd Grossman and Brian Blessed. Grossman claims his accent is a mixture of Massachusetts and Fulham. Jo Brand tells a story about Brian Blessed's attempt to climb Mount Everest. At one point, they were camping on the edge of a glacier in a tent on the end of a washing line. If someone needed to go to the lavatory, they needed to do it over the edge and the wind would carry it off. One of the party did so; however the wind blew his faeces into the hood of his coat.

- Engineering: Triglyphs were used to support wooden beams when temples were made out of wood. They say of the Acropolis, where the Parthenon is, that there are no straight lines. Stephen has trouble saying this and the panel mock him continuously, even singing it to him.

(Presenter: The shrunken Alan Davies. No new material is shown.)

They say of the Acropolis, where the Parthenon is...

QI's most famous outtake, feautring Stephen being mocked by Alan, Jimmy Carr, Rob Brydon and Bill Bailey for his failure to complete a sentence.