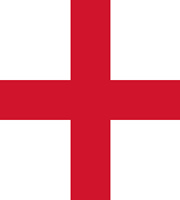 - Everyone has an English flag in front of them, although Alan swaps his with the Welsh flag.

- The Lake District has only one lake - Lake Bassenthwaite. All the others are meres, waters and tarns. This question is answered correctly by the audience. (Forfeit: Windermere; Coniston)

- The first King of both England and Scotland was Athelstan in 937. (Forfeit: James I)

- No-one knows what the V-sign means. The earliest known use of it was recorded in 1901. Some believe it was something to do with having sex with someone else's wife. The myth about English archers showing their fingers in battle so the enemy could see they could still fire their arrows was invented in the 1970s. (Forfeit: Archers)

- "Abumgang" means "Thank you" in the language of the Eton tribe of Cameroon. Other words include "Mrmrminger" which is a beautiful woman. Other Cameroon tribes include the Bum, the Bang, the Banana, the Mang, the Fang, the Tang, the Wong, the Wang, the War and the Bongo.

- Elephant in the Room: Jumbo was a very large elephant born in the Sudan. He was captured, taken to Cairo, Paris and later London where he became incredibly popular. In 1882, P. T. Barnum bought Jumbo for $10,000 under great protest from the English. There were debates in Parliament. Some threatened to kill Barnum and even kill Jumbo because they thought that having Jumbo dead was better than him being exported. Barnum made $30,000 from Jumbo in 3 days and $1.5million over 3 years. Jumbo was killed in a train crash. His skull was broken in over 100 places. He was stuffed and became the mascot for Tufts University until he was destroyed in a fire. He is where we get "Jumbo" sized things from.

- Apart from the Bible, the best-selling book in England in the 16th century was a book about behaviour for children by the Dutch philosopher Erasmus. His advice includes not being afraid of vomit, not offering your handkerchief to anyone unless it has been freshly washed, nor to look into it after you have just blown your nose, and you should not move back and forth on your chair, as it looks like you are trying to break wind. Erasmus and Stephen went to the same college at Cambridge.

- Tangent: Sean tilted to one side to break wind during a school exam, and someone thought he was cheating by looking the exam paper next to him.

- Most people with the surname Nutter in England live in Blackburn. Pigg's live in Newcastle, Daft's in Nottingham, Smellie's in Glasgow, Bottom's in Huddersfield and Willy's in Taunton. The surnames that have dropped in use in recent years include Handcock, Glasscock, Higginbottom, Shufflebottom and Winterbottom.

- Bluebirds will not be found over anything in England, because they are not native to Europe, but to North America. (Forfeit: The White Cliffs of Dover)

- Elizabeth I had a bath four times a year. (Forfeit: Never; One)

- The smallest county in England is the Isle of Wight, but only for half the year because of the tides. (Forfeit: Rutland)

- Most of the swans in England are free, they do not belong to anyone. The Queen only owns the mute swans. Apart from Royals, the only people allowed to eat swan are fellows of St. John's College, Cambridge on the 25th June. Swans have a fishy taste, although the best ones are fed on oats when they are young. The most common cause of death for swans is electrocution. (Forfeit: The Queen)

- The Oxford History of England is about the history of British Isles. At the time and still today, "England" is accidentally used to mean the whole of the UK and even the British Empire. (Forfeit: England; France)

- The word "England" comes from the Angles of Schleswig-Holstein in North Germany.

- When Jesus returns, you want to be living in Bedford, because this is where the Garden of Eden is and will therefore be the only place to survive the Second Coming, according to a religious cult called the Panacea Society. The Society has brought a house for Jesus in Bedford called "The Haven" and several houses in the Castle Road area are ready for Jesus.

- Tangent: Bill Hicks claimed that today, Christians would wear little electric chairs around their necks because that is how Jesus would be killed today.

- Tangent: A story about Kenneth More that was too rude to be broadcast. He was introduced to Noel Coward who said to him: "Do you take it up the arse?". More said: "No, actually I don't". Coward responded by saying, "Oh very well, we needn't quarrel about it."