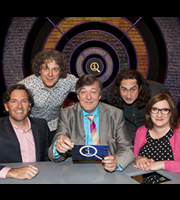 - The loneliest whale in the world also makes the highest-pitched noise in the world. No-one knows what sort of whale it is. It is either a blue whale, a fin whale, or possibly the offspring of two different whale species, and thus would be the only whale of its kind. The noise measures at 52 Hertz, and is so high pitched that you cannot hear it on most TV because the bass is so high (unless you have a really good sound system).

- Tangent: The blue whale makes the loudest noise of any animal. It is 180db, can be heard over 500 miles away, and the deeper the whale is the further it will travel.

- XL: If you were to find a vampire deer who're gonna call? The Natural History Museum is who. Stuart Hine, who is in the studio audience, comes from the department of the museum that you contact whenever you discover the remains of something strange. One example is the skulls of vampire deer, a species of sabre-tooth deer found around Cambridgeshire and Norfolk. These deer originally came from China, where they are now increasingly endangered, but a pair from a wildlife park in England escaped in the 1930s and now around 10% of the world's wild vampire deer population comes from this pair. Other objects often sent to the museum include what people think might be meteorites but are in fact just lumps of slag, and "star jelly" which people think is jelly from meteorites or space that is actually frogspawn, possibly combined with magpie vomit. (Forfeit: Ghostbusters)

- XL Tangent: Stephen jokes that the success of a single pair of breeding vampire deer is proof that incest sometimes works. This in turn leads Ross to remind Stephen that these vampire deer live in Stephen's home county of Norfolk.

- There are some sure-fire way of telling butterflies apart. One is by tasting them. There is a thing called "Mullerian evolution", which is where one species copies one aspect of a similar species to survive. For example, one species of butterfly was attacked by birds and so evolved to taste nasty. But then a second species evolved to look like the first, so the birds assume that they are the first species and won't attack them. Another way is to look at their genitals. Vladimir Nabokov, the novelist who wrote Lolita, was a keen lepidopterist and he collected butterfly penises, which he put in jars. His collection is now at Harvard. Nabokov wrote the whole of Lolita on the index cards he also used to write his butterfly notes. (Forfeit: Colours)

- Tangent: Ross jokes that Stephen's suits are made out of butterfly penises and pubes.

- In order to impersonate a puffer fish on the pull you would have make a ridged crater in the sandy seabed and decorate it with shells. It consists of many tracks made over nine days. They have to be shaped perfectly otherwise the female will not be interested. If the female likes it, she will lay her eggs in the exact centre. The male fertilises them and looks after the infants for six days.

- The people at QI call a fish that drives a tank "Alan". Alan is a goldfish in the QI office who has a mini-tank (he has a normal-sized tank too) which detects Alan's movement, and moves on wheels in the direction Alan is swimming. The tank itself was made by QI elf Alex Bell, who appears on the set to describe how it works. It was made out Lego over a few days. This design was based on that of a Dutch company called Studio Dip who made a similar, larger tank. The tank has motion sensors in each corner that detect the movement of the fish. (Forfeit: Sir)

- The thing that has 32 brains and sucks is a leech. One experiment with leeches involves filling a condom with blood and rubbing some of these condoms on a frog. The leeches will only go for the condoms that have been rubbed on frogs because what they sense is the smell of the frog. They have not evolved to suck human blood, but to suck the blood of other animals.

- XL: The role that twiglets have in a mugger's lunch is to trick birds. The mugger crocodile uses small sticks, known as "twiglets", to disguise itself. The birds think that these twigs would be useful to make its nest from and as the bird approaches the crocodile attacks. It is the only known example of a reptile using tools, in this case a form of lure.

- XL Tangent: The panel argue that birds are dumb. Stephen defends them by saying that crows are intelligent, but Ross counters this by saying that if they are so clever, how come they are terrified of scarecrows?

- XL Tangent: Other animals that use lures are a species of snake which hides in the sand and waves its tail, pretending to be a worm. The prey approaches the tail, and then the snake jumps out of the sand and captures the prey.

- Spending a Penny Bonus: The most energetic thing a sloth does is using a communal lavatory which is shared by all the sloths in the area. At the Estacion Biologica Quebrada Blanco in Peru (a field research site near the Amazon), they observed two-toed sloths hanging above a latrine, dropping themselves down into it, and then scooping up handfuls of human excrement and toilet paper, eating it. They would scoop with one hand and eat the poo, and when more people came to watch the sloths, the sloths climbed out and went back into the trees.

- Tangent: When sloths die their corpses stay in the trees for a long period of time.

- The cat that never changes its spots is the lion. It has spots around its whiskers. These spots never change during the lion's lifetime and are unique to each lion. Leopards begin with big spots, which shrink as they get older and are known as "rosettes".

- Tangent: If you shave a jaguar you see that the spot pattern is on the skin, not the fur.

- The biggest of the big cats is the liger, the offspring between a male lion and a female tiger. The opposite is a tigon. (Forfeit: Lion; Panther; Tiger)

- XL Tangent: In January 2014 the first ever white ligers were born. These could be the biggest big cats ever born.

- XL Tangent: There are various zebra hybrids, and there is the wholphin, a cross between a false killer whale and a bottlenose dolphin.

How does a pufferfish attract a female?

Stephen Fry and his guests discuss the rules of attraction for pufferfish.