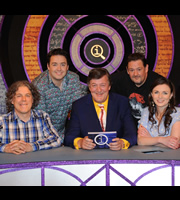 - XL Tangent: QI creator John Lloyd said in one of his Edinburgh Fringe shows that out of all the billions of galaxies in the universe, we can only see four of them from Earth with the naked eye.

- Tangent: Johnny asks if the Sun is actually the centre of the universe, a question Aisling also takes seriously. Stephen accidentally acts in a patronising manner, leading Johnny to sarcastically claim that this is a great way of building his confidence for the rest of the show.

- XL: The Big Splat Theory is one of the possible theories about how the Moon was formed. In this theory, an early planet called Theia collided with the Earth and this formed the Moon, but in order for this theory to be true then the Moon should be made out of material that is not found on Earth and all studies of the Moon have shown it to be made out of stuff that is on Earth. Another theory, created by Charles Darwin's son George, was that the Moon was created by a chunk of the Earth that was flung off by the planet's extreme rotation, and that the hole it left on the Earth is now the Pacific Ocean. A third theory is that the Moon originally belonged to Venus and that the Earth appropriated it. However, the people who created this theory do not believe it themselves and only came up with it to keep arguments about the origin of the Moon alive. In reality however, no-one really knows where the Moon comes from.

- XL Tangent: When Johnny was younger and heard about the eruption of Mount St. Helens in the USA, he thought that it was occurring in his hometown of St. Helens.

- If Johnny and Jason got naked, covered their legs in lard and put their hands on each other's shoulders the thing that you can expect to happen next is that they would kick each other's shins. The sport of shin-kicking was common in North-West England around the 18th-19th century, and still carries on down south in the Cotswold Olimpick Games. But now they use bails of straw tucked down their trouser legs to protect them, while a "Stickler" acts as a referee. In the original version of the game the players wore clogs with a large metal blade in them, and the lard was used to encourage a glancing blow rather than a direct one. The skill was moving the legs so as to avoid being kicked. The loser is the first to submit by saying the word: "Sufficient". Shin-kicking was also known as "purrin", "porrin" or "parrin". There is a Shin-Kickers Association of Britain, known as SKAB. One shin-kicker we know of is Johnny's uncle. He was blind by the time Johnny knew him, but Johnny knew it was his uncle's pastime and that he was "phenomenal" at it.

- XL Tangent: Alan's grandmother used to say "sufficient" when she had eaten enough. Johnny claims that Alan's grandfather was actually shin-kicking Alan's grandmother. Jason suggests that they should have added shin-kicking and other sports Britain are good at like darts and snooker in the 2012 Olympics, but Alan points out that Britain would still probably lose.

- There is a pub in Salford called "The Spanking Roger", and the way the original Spanking Roger wooed the ladies was by running naked. Spanking Roger, a 6'4" Scottish soldier, ran naked down Kersal Moor where his future 65-year-old wife, Barbara Minshull (after whom several areas and streets in Manchester are named) spotted his impressive manhood and the two got married. But as soon as they got married Roger was cheating on her and spending his money on bare-knuckle fights. Whoever he beat got dragooned. After this Spanking Roger helped to defend against the siege of Gibraltar, the longest siege in British military history, which lasted 4 years. After this Barbara died, he became impoverished, but got married again and died a rich man. There is still a naked race in the area now.

- Tangent: Kersal Moor is now Castle Irwell, an area which also once had a dog track but is now filled with student accommodation, and is where Jason lived when he was a student.

- Tangent: Christopher Hitchens said that there is no surname in English that cannot be improved by adding the word "Spanking" in front of it.

- The thing that is short, talks gibberish and is much sought after in Merseyside is a leprechaun. In July 1964 children in Liverpool stormed into parks, ripping up plants and causing chaos because there was a belief that a leprechaun had been spotted. This craze lasted for around 11-12 days and then ended. In 1982, a man named Brian told the Liverpool Echo that what happened was that some children were mocking him whilst he was working in the park because he was so short, and the children called him a leprechaun. Brian played along with it, joked that he was a leprechaun, spoke in a mock Irish accent and threw sods of earth at the bullying kids. Thus the kids thought that they really did see a leprechaun and went hunting for more. According to original myths all leprechauns are male and work as cobblers.

- Tangent: Aisling complains about the picture being used to describe the question, a park with leprechauns photoshopped in, because the leprechauns in the picture are actually garden gnomes.

- Tangent: Alan once brought a plush leprechaun in Dublin airport which sings when you press its belly. Alan says it is one of the scariest things has ever brought. His children love it, but Alan and his wife are scared of it. Jason's children have a teddy bear with a heart on its belly which says things like, "I love you" and "I see you", when you press it. However, the battery on it is going low. One time he got up in the middle of the night to go to the toilet and the bear said, in a distorted voice "I see you", which sounded really sinister.

- Tangent: An Irish friend of Stephen's told him an unwritten rule, which is to never go into an Irish pub in the USA or London which has a neon shamrock sign, because it will be rubbish.

- XL: The London attraction that cost two arms and two legs to enter was the animal menagerie in the Tower of London. This menagerie was begun by King Henry I in Oxfordshire, but his son King John brought it down to the Tower of London where it lasted until 1830, when it was moved to Regent's Park and became London Zoo. You could pay money to see it, or you could go for free if you brought in an animal to feed to the larger specimens in the menagerie. Sheriffs of London had to pay 4d a day in order to feed the polar bears in it. One incident in 1830 resulted in a keeper allowing two tigers and one lion to be kept in the same cage. The lion was killed and the tigers had to be kept away using red hot pokers.

- Spending a Penny Bonus: In 12th century London, if you spotted a man dressed in a large black hat, wearing a long black cape and carrying a wooden bucket, you would use him to go to the lavatory in private. At this time it was common to simply go to the toilet in the street, but if you did not want to do so, you could pay this man to cover you up with his cape while you sat on the bucket underneath. The man in the studio wearing the outfit is QI elf Stevyn Colgan.

- XL Tangent: One of these men that provided such a service was called Thomas Butcher. He was fined for overcharging his customers.

- XL Tangent: The black heron also does a similar cape-like effect which it uses to lure prey. It feeds on fish, and as fish like to swim to cool water in some climates the heron makes a shadow which the fish thinks is a cool spot. In one sketch in Jason's sketch show Walk on the Wild Side, a black heron does this move while shouting: "Night time! Day time! Night time! Day time!"

- XL: There is nothing that is black and white and doesn't live in the Arctic. Although penguins are not native to the Arctic, people have taken them to the Arctic and now the is a penguin population. (Forfeit: Penguins)

- The part of the world where the idea of eating frog's legs comes from is England. It dates back to 7,000-6,000 B.C. at Stonehenge. There is evidence of toad-eating, as well as three-course meals. These consist of frogs with hazelnuts, a fish course and blackberries. The French eat between 3,000-4,000 tonnes of frog's legs per year. (Forfeit: France)

- XL Tangent: The Romans took 40,000 troops to suppress Scotland, but when they got their there was no-one to suppress. The Scottish just hid, attacked at night, and the Romans simply gave up.

- XL Tangent: Jason walked along Hadrian's Wall with a cockney friend of his, and Jason came across what he saw as a perfect example of the stereotype that northerners are friendlier than southerners. As they walked along two other people came from the other direction. One of them said: "Morning", Jason replied with: "Morning", and his southern friend said: "Who's that?"

- The panel are given what seems to be a green sauce or dip seen in Japanese restaurants, are asked to eat it, and say what it is. It is actually horseradish dyed green. Genuine Japanese wasabi takes two years to mature and is very expensive to transport, so restaurants tend to use British horseradish and dye it because it is quicker and cheaper to make. (Forfeit: Wasabi)

- Lab Lark Experiment: Stephen demonstrates something called the Leidenfrost Effect. This is where you get beads of water to react in certain ways on specially shaped heated metal. For example if you heat up a lump of saw-toothed metal you can make water flow upwards. Stephen then shows examples of water spinning around in a concave metal bowl, spinning around really quickly on a circular saw-toothed metal pole, and then gets a bead of water to travel around a metal maze.