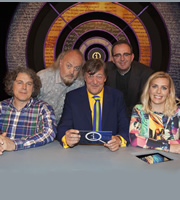 - The thing that has four legs and a sense of humour is rats. The panel are played footage of Estonian-American scientist Dr. Jaak Panksepp tickling rats. The rats laugh, but at a frequency above human hearing. The rats return to the doctor because it likes being tickled. This is related to the mating habits of rats. If a female rat has bad sex with a male rat, then the female will never have sex with that particular rat again, even if he is the only male. However, if a female rat has good sex with a fake rat, the female will keep going back to the fake rat.

- Tangent: According to an article in New Scientist research shows that bees are pessimists. Bees were introduced to both positive and negative stimuli, then they introduced to some neutral stimulus, and the bees behaved as if it were negative. The queen bee lays 3,500 eggs every day for two years and then dies.

- Tangent: Koko, a gorilla in San Francisco Zoo who knows sign-language may also have a sense of humour. When asked: "What can you think of that is hard?" Koko replied: "Rock and work." Another time she tied up her trainer's shoelaces and then signed the words: "Chase me." Miriam Rothschild once had a parrot that could mimic her whistling and saying it would walk the dog. When the dog entered the room the parrot would laugh. Stephen tells a joke about a parrot that cries whenever Norwich City loses. When a friend of the parrot's owner asks what happens when Norwich win the owner says: "I don't know, I've only had it four years."

- Tangent: Dr. Dirk Wildgruber from the University of Tubingen, Germany, says there are categories four kinds of laughter: joyful, social, taunting and Schadenfreude.

- XL Tangent: While Alan was filming Jonathan Creek there were two prop boys who used lots of rhyming slang and a third prop boy who didn't understand it. One day one of the first two boys said: "We had a lovely bit of Sinatra on in the van this morning." The third guy laughed, but the first two were being literal - they were just talking about listening to Frank Sinatra on the van radio, but the third guy was nervously trying to join in with what he thought was comic slang. Richard talks about the sort of polite laugh you get during church sermons or Shakespeare jokes.

- XL: Rats get sad during the summer. They suffer from Seasonal Affective Disorder (SAD), but because they are nocturnal and have circanoctium (around the night) sleeping patterns they get badly affected during longer summer days.

- XL: A really ostentatious way to turn off a gas fire is to use a hydrogen bomb. Edward Teller, the creator of the H-bomb, wanted his invention to be used for more peaceful means. He referenced the Book of Isaiah by saying: "You would beat your sword into a ploughshare." Teller wanted to use H-bombs to widen the Panama Canal, use 22 bombs to create a road and railway through the Bristol Mountains in California, and use 1,000 bombs to blow a city-sized airship into space. This became known as "Operation Ploughshare", but in the end only two plans went ahead. One was to blow up bombs underground to generate steam and create electricity. This plan was rejected because they could not contain the explosions. The other plan was to use bombs for fracking natural gas, but this made the gas radioactive. The Russians also had similar ideas, and one idea that really did work was to put out large gas field fires. This plan was used five times. Four times it worked completely, without any fallout. The Americans considered using this approach during the Gulf of Mexico oil disaster.

- The kind of household appliance that really nobody wants is a gas-powered wireless set, on indeed a gas-powered anything. Gas companies introduced such items in order to prevent people from going "on the electric" back in the 1920s and 30s. They said that gas-powered wirelesses would also "warm the room slightly" as a bonus. However, the wireless was still electric; it was just that the gas was being used to power the current. Also, electric power was more reliable.

- XL Tangent: The electricity that is produced by gas comes from the difference in cold and heat. The Russians used it with kerosene in Siberia. The Russians recommended that in order to hear the radio better you should open the window to increase the power.

- XL Tangent: One BBC radio programme in the 1930s featured darts player F.H. Wallace throwing darts at a board, and then the listener would do the same at home. If you were able to get down to 301 before Wallace you beat him. There was no prize, but they would say: "Pat yourself on the back when you go to work tomorrow."

- The most depressing radio programme of all time (even more so than Alan's suggestion of Simon Bates's Our Tune) was Drahtfunk - Wire Radio. During the Second World War the Swiss, Swedes and Norwegians found they could use electricity and then phone lines to transmit radio. The Germans used to it broadcast information about bomber raids, and people could use the information they heard to get to the shelters in time. (Forfeit: Saturday Live)

- Tangent: When Richard presents Saturday Live he does so with a live Twitter feed on a screen in front of him, meaning he sees all the comments tweeted into the show. He once spotted two tweets which when read together said: "Smug-Maester twat vicar". Alan once wrote an article that was mainly mocking himself but he also called Frank Lampard a twat. Lampard complained so Alan tried to look up the article because he could not remember exactly what he wrote. He Googled "Frank Lampard twat" and nothing came up. He then Googled "Alan Davies twat" and he found a lot of abusive comments about himself. Alan then looked up every other term of abuse concerned with him, in what he described as one of the worst evenings of his life. There was a time when you Googled the c-word the first result was "Englishman". Bill claims that the best online comment he ever spotted was on a YouTube clip of Ronan Keating singing "Fairy Tale of New York" in which someone wrote: "This is the worst thing that ever happened." Richard also once did a listener complaint programme for BBC Radio 5 and one complaint he took from "Margery of Hemel Hempstead" was: "I'm absolutely disgusted with everything" and then she put the phone down.

- You would not enjoy kissing any of the gunner's daughters because it was a naval punishment. It involved being tied down to cannon and then beaten with a cat-o-nine-tails. This punishment is still being used, but not by the British. Children on ship, who could be as young as nine, may be punished by bending over a cannon and being lashed on the bare bottom by a whip known as a "boy's pussy". Kissing the Gunner's Daughter is also the name of a band in Seattle.

- Tangent: Another punishment is being firked, which involved being beaten with the staves of a firkin barrel. It was a punishment to people on the galley if they ruined the food.

- XL: George III was nearly, literally toast in 1776 (the year the USA got independence) because he was in a house that was on fire. David Hartley MP, who was a friend of Benjamin Franklin and the first MP to introduce a bill to outlaw slavery, also came up with a way to improve the fireproofing of houses by putting metal under the floorboards. Hartley demonstrated to George III how good it was by getting him to come to his house in Putney and slowly setting fires in rooms all around the house. Everyone survived and the idea spread. Hartley's lasting legacy was that he created the fire curtain used in theatres.

- XL Tangent: Sara describes Hartley as the real Mr. Sands. "Mr. Sands" or "Dr. Sands" is the codename used in theatres to warn the staff that there is a fire in the building. Theatres used to burn down all the time. One time Richard Sheridan's theatre burned down and he was seen outside drinking. When someone asked him about putting the fire out Sheridan replied: "Can't a man take sake by his own fireside?" The only difference between the original Globe Theatre that burnt down and the modern reconstruction is that there is no thatched roof. When the original burnt down the fire was put out using beer.

- Dutch tears are droplets of molten glass dropped into cold water. The glass instantly solidifies, but the inner part does not have time to get as hard. Thus there is a tension in it. You cannot smash it with a hammer, but if you cut the tail off it will explode three times quicker than a sniper's bullet. They were introduced by Prince Rupert of the Rhine, who some argue was responsible for Charles I losing the Civil War. Stephen demonstrates the speed of explosion himself by clipping the tail off a Dutch tear, which Alan films.

- XL Tangent: Stephen Ramsey of Imperial College London is the man who created the Dutch tears used on the programme. He explains that the cooling process used to harden glass is the same process used today in making car windscreens.

- The person you should visit on Mothering Sunday is your vicar or priest, because originally it was the day that children in service returned to the mother church where they lived.

- Tangent: Richard was told that the most marked-up item on sale was a greetings card, but he then asked about whether cinema popcorn might be even more so. Sara suggests it could be eggs, because omelettes cost so much more than eggs.

- The flags on the Moon are now most likely just white, possibly grey. The colour on them will have faded. This partly due to the temperature differences there, ranging from 14 days at 100 degrees Celsius to -150 degrees for another 14 days. Also, there is no atmosphere, so there is no protection from the Sun's UV radiation.

- Tangent: Richard brings up a question asked at his Mother's Union. He asks whether the Voyager space craft would now look scruffy. It is estimated that Voyager will go out of radio transmission in about 10 years time, and it will take 40,000 years to reach the next solar system.

- XL: The first man-made sonic boom comes from eating crunchy food. A Dutch food physicist found that for food to be crunchy there has to be a brittle fracture, a high-speed crack, which travels at least 300 metres per second. (Forfeit: Whip)

Stephen Fry tells a joke about a parrot.