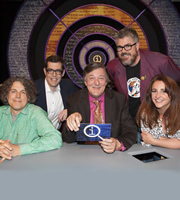 - The largest native land animal that you will find all-year-round on Antarctica is the Belgica Antarctica midge. Humans do not count because no humans have been born there. Penguins only spend 25% of their life times on the surface of Antarctica and the rest is spent underwater. (Forfeit: Human; Penguin).

- Tangent: An American scientist stationed in Antarctica used Tinder, the dating app, and he got a date with a woman in tent 45 minutes away who was also a researcher. If the two have fallen in love and have a child, that child could well be said to be a native of Antarctica and thus could become the new largest native land animal in Antarctica. Richard jokes the penguin version of Tinder is called "Pick up a Penguin".

- The world's biggest gasbag at the time of recording was the hot air balloon used by Felix Baumgartner in his record breaking parachute jump. This jump broke the records for highest balloon ascent, biggest freefall jump and the first man to break the sound barrier unaided. The balloon itself, known as the Stratos Balloon, was taller than the Statue of Liberty. The Statue of Liberty is 305ft / 93m, while the balloon was 334.82ft / 102.5m. The balloon had a capacity of 29.47 million cubic feet / 84,950 cubic metres. Correction: As the episode was aired, an on-screen correction appeared in subtitles which read: "This bit isn't true any more. Felix Baumgartner's record was broken by Alan Eustace in October 2014 - after this show was recorded. Don't you just hate it when that happens?"

- Tangent: Bruce Dickinson from Iron Maiden is currently involved in the design of a new type of airship. The airship is between 200-300ft long, and the hanger it is stored in has its own microclimate. It travels at 100mph, can carry 50 tonnes; can stay in the air for three-and-a-half weeks, and unlike the Hindenburg it is filled with helium rather than hydrogen so it is less flammable. The Hindenburg burst into flames at the Lakehurst Naval Air Station in New Jersey. Despite being full of hydrogen there was a cigarette lighter on it, chained to a wall. The passengers had to wear special shoes that did cause static electricity.

- The main possible use for a blue whale at a birthday party would be to blow up balloons. A single blue whale's puff of breath could inflate 1,250 balloons.

- Lab Lark Experiment: The panel are all given big large plastic bags and are asked to inflate them. While this would normally take a long time, Lucy demonstrates that you can do it in one single breath from a distance into the bag. This single breath pushes the bag out to its full size. Then you just grab the hole tight and you have the bag fully inflated. This is known as the Bernoulli Effect.

- The person who said: "The most beautiful girl or woman in the world would be a matter of indifference to me, but tall soldiers - they are my weakness" was King Frederick Wilhelm I of Prussia, father to Frederick the Great. Frederick Wilhelm I founded the Potsdam Giants, a regiment of tall soldiers. He was obsessed to the point that he would kidnap tall men so that he could recruit them. One of his tallest was a 7ft Irishman called James Kirkland, a hero of the regiment. Frederick Wilhelm paid fathers for tall sons, and paid tall women to have sex with tall men so they could have tall sons. If Frederick Wilhelm was unhappy he would get 200-300 of his Giants, preceded by tall turbaned Moors with cymbals and trumpets, and the Grenadiers' mascot, which was a large bear, to march in front of him. They would do this through his bedroom if he was ill. The Potsdam Giants lasted for 100 years. (Forfeit: You did)

- Tangent: Richard jokes that the person who actually said that quote was his PA Kelly, saying that is all she obsesses about is a tall ginger squaddie, failing that a ginger roofer.

- Tangent: Lucy knows about the Potsdam Giants because it was mention to her and her husband. Lucy is 4'11", while her husband Justin Edwards is 6'5", so in her words it looks like a ventriloquism act gone wrong. But Alan argues that it is so wrong it's right.

- Sir Billy Butlin, the founder of Butlin's Holiday Camps, was such a little devil because he was one of the "Devil's Dwarves" during WWI. You could get out of conscription if you were below a certain height, but then the rules were changed by Lord Derby because the army was short of men, so they had a brigade of short soldiers known as the Bantam Brigade, consisting of men under 5'3". The Bantam Brigade was nicknamed the "Devils" or the "Devil's Dwarves" because they had a reputation for brawling and mischief. The most famous of these soldiers was 4'9" Henry Threadgould, who is believed to be possibly the shortest soldier to serve in the British army.

- XL: Stephen gets out a pair of platform soles of differing heights for all the panellists except Richard and the panel are asked what they are for. The answer is they are to make everyone level. Artist Hans Hemmert in 1997 created a piece called "Levels", in which people wore these soles so everyone wearing them would be 6'6" (2m) tall. Instead of wearing these platforms however, the panel have special wooden blocks to stand on. Richard (6'7") bends down a bit while Alan (5'11"), Stephen (6'4"), Phill (6'0") and Lucy (4'11") all stand on their blocks so everyone is now the same height.

- XL Tangent: Richard claims that one problem with being tall is that you are constantly being asked to appear on police identity parades.

- XL: The Gimps are searching for prime numbers (numbers that only divisible by themselves and one). The acronym GIMPS means: "Great Internet Mersenne Prime Search", and it has been going on since 1996 using computers all over the world. A Mersenne prime is 2 to the power n minus 1. For example, 3 is a Mersenne prime because it is 2 squared minus 1. The longest Mersenne prime as discovered at the time of recording is 17,425,170 digits long. Part of the reason for the search is to see if there is any mathematical way of understanding prime numbers as a whole. Correction: Since this was broadcast a larger prime number has been discovered. This was discussed on the QI podcast No Such Thing as a Fish, episode 98.

- XL: The panel are shown a picture of what appears to be a WWI tank called the Goliath and are asked where the driver sat. The answer is there is no driver, because the Goliath may look like a tank, but once the picture is zoomed out you see that it is actually a remote controlled mine. It was used by the Germans.

- XL Tangent: Another remote controlled bomb is the Davy Crockett, which was a portable launcher mounted on a jeep that fires small nuclear bombs. It was developed by the Americans during the Cold War. The bombs were 75lbs each (which is the same as 11-year-old boy, five racing bicycles, 100 cans of beer, 300 apples, or 262,500 bees). 2,000 of these were deployed in Europe between 1961 and 1971 to deter the USSR. The nuclear yield could be switched between 10 and 20 tonnes. The troops also had the Special Atomic Demolition Munition (SADM), which were backpack nukes. These were used in Eastern Europe, Korea and Iran. Although small the bombs were more powerful than the ones dropped on Japan during WWII. None were used.

- XL Spending-a-Penny Bonus: The best way to get shit out of a tank is to fire it out of the barrel. This was done by the Russians in T34s. Aleksandr Georgievich Semenov from St. Petersburg was given a patent for a, "Method of Biowaste Removal from Isolated Dwelling Compartment of Military Facility and Device for its Implementation", which was a way of firing the tank's lavatory contents at the enemy. He described the effect thusly: "The military psychological positive effect takes place: comprehension of the facts of delivering and distribution on enemy equipment and uniform, as well as the opportunity of informing other soldiers and the enemy about it." In other words, covering the enemy with shit is good for morale because it is funny.

- The panel are shown a picture of two men and are asked what the man on left had which was twice as big as that which belonged to the man on the right. The man on the left is highly respected 19th century Russian novelist Ivan Turgenev and the man on the right is the 19th century Nobel Laureate but less popular Anatole France. The thing that Turgenev had which was twice as big as that of France was a brain. Turgenev's brain was 4lb 6oz, while France's brain was 2lb 4oz. It is often considered that bigger brains are a sign of intelligence, but in this case the man who won the Nobel Prize had the smaller brain. (Forfeit: Penis)

- You can feel things that are incredibly small. In 2013 scientists used a very smooth surface to get rid of as much friction as possible, and it was discovered that using your fingers you can feel something that is only 13 nanometres high - the size of a single molecule, which is 10 times smaller than a bacterium, which luckily humans cannot feel. Humans do this by sensing vibrations from the friction. The research team created invisible wrinkles of 16 different heights and the smallest detectible ones were 7,000 times thinner than a sheet of paper.

- XL: The second biggest film industry is based in Nigeria, and is known as "Nollywood". The biggest of all is Bollywood. Nollywood was founded by Kenneth Nnebue in 1992 when he purchased a large number of blank VHS cassettes from Taiwan and he figured he would sell them better if there was something already on them. Nnebue quickly made a film called Living In Bondage, which is about a man who achieves power and wealth by killing his wife, but the wife comes back to haunt him, thus destroying his happiness and sanity. It sold 750,000 copies, and people jumped on the bandwagon. 30 films a week are now turned out in Nollywood.

- XL Tangent: Richard once made a half-hour quiz show TV pilot in Nigeria. The people making the programme built a studio in the middle of a field, brought everything they needed into the studio, filmed the pilot, and then dismantled the entire thing.

- The country whose armed forces has an official march about a tramp by a pond being accosted by a farmer because he's stolen a sheep in his lunch bag is the United States. The song is "Waltzing Matilda", and while it is associated with Australia, the song is used by the First Marine Division because of their relationship with the Australian army during WWII. "Waltzing Matilda" is also the slow march for British Royal Tank Regiment. (Forfeit: Australia)

- Tangent: The photo used to illustrate the Marines features tall soldiers and a women standing behind them, which Richard claims is his PA Kelly.

- Tangent: "Waltzing Matilda" was out-voted when the Australians created their national anthem by "Advance Australia Fair". This is one of their official marches, the other being "God Save the Queen".

- When a chicken lays an egg the end that comes out first is the big end. The panellists demonstrate this by pushing rubber eggs through washing-up gloves.

- Tangent: The panel are given real eggs and demonstrate that if you squeeze an egg tightly you still won't be able to break it in this way.

What use is a blue whale at a birthday party?

Stephen's guests attempt to answer the question 'what use is a blue whale at a birthday party?'