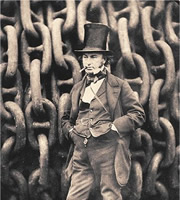 - Stephen has a toy train and sweets which he can deliver to anyone who gives a quite interesting answer.

- The people who built Britain's railways were the navvies. They were trained for a year and were fed on a diet of meat and beer. They could out-perform any other manual labourer.

- Tangent: Railways had to be flat when they were first made. Bill tells the story of the Russian Tsar who ordered the Trans-Siberian railway to be a straight line. He drew the line with a ruler, but his fingers were over the edge of the ruler, so two large curves were built in. Bill gets a sweet for his answer.

- Tangent: The London to Birmingham Railway took the same amount of work to build as one-and-a-half Great Pyramids. Rob's discussion about 'what is half a pyramid' gets him a sweet.

- "Navvy" is short for "Navigational engineer". Alan gets a sweet for the correct answer.

- When the Americans went off the rails (or rather their trains did), the passengers lifted them back onto the line. The trains were built to be as light as possible.

- Tangent: When the Central Pacific Railway was being built, the track was laid as fast as a man could walk.

- Eton College did not want a railway station built in Slough (Jimmy's hometown) because they were worried that its pupils would take the train to visit prostitutes.

- Tangent: A travel book once advised that women railway passengers should stick pins in their mouths so men would not kiss them in tunnels.

- For 18 birthdays in a row, Isambard Kingdom Brunel's birthday present was that the sun would shine through the Box Tunnel on his birthday (9th April). Jimmy gets a sweet for the right answer.

- The best place to be when a nuclear bomb goes off is Las Vegas, which benefited from tourism because a nuclear testing site was nearby. It advertised itself as a place to watch nuclear bombs going off.

- In 1994, the Americans came up with an idea for a "Love Bomb" (also known as the "Gay Bomb") that, when detonated, would make the enemy soldiers attracted to one another. The aim being they would stop fighting and have sex with each other.

- Elephant in the Room: You can make a baby elephant using an ultrasound probe, a light emitting tube, a bicycle helmet, protective clothing, a huge tube of Vaseline and a wheelbarrow. It is what you use to artificially inseminate an elephant.

- A vampire bat is most likely to bite you on the big toe.

- The biggest load of rubbish in the world is in the North Pacific Gyre (a.k.a. The Pacific Trash Vortex). Rubbish that does not biodegrade, such as plastic, floats on the surface. Some fish eat it.

- Tangent: One member of the audience claimed that the biggest load of the rubbish in the world was France.

- Tangent: Tourist attractions such as the London Eye and a fairground ride went quicker because Alan was on it. According to Alan anyway.

- Tangent: Jimmy talks about new winners of the Darwin Awards.

Vodcast of the "Engineering" episode.