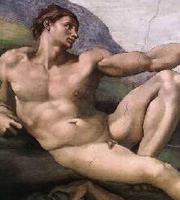 - Adam's navel and the Archbishop of Canterbury's left ear are both purely decorative.

- God allowed Noah to eat animals, a right he had previously denied to Adam and Eve.

- Christopher Plummer once said of Julie Andrews that working with her was like being hit on the head with a Valentine card.

- Andrew Graham-Dixon discovered that the painter Caravaggio accidentally killed Ranuccio Tomassoni on a tennis court. He was merely attempting to cut off his testicles. (Forfeit: New Balls Please)

- Tangent: Sheep are castrated without breaking the skin.

- "Finocchio" (fennel) is Italian street slang for a homosexual.

- According to Andrew Marshall's writings on Burma in The Trouser People, the Burmese idiom, "Excuse me sir, but I see your department store is open, even on weekends," means, "Your flies are open."

- Edward Woodward has four "D's" in his name to prevent it becoming, "Ewar Woowar".

- Tangent: Kiwifruit use up more than their own weight in aviation fuel getting from New Zealand to Europe.

- Tangent: When Sir John Gielgud first heard of the name "Edward Woodward", he thought it sounded like a fart in a bath.

- Actor John Barrymore regretted not being able to see himself perform on stage.

- Tangent: A drunken Peter O'Toole once went to see a play, having forgotten that he was supposed to be in it.

- Young giant anteaters indulge in "bluff charging". Their claws are sharp enough to eviscerate a human.

- Anteaters have sixteen-inch tongues, but mouths as narrow as a pencil.

- Tangent: The average graphite pencil can write for thirty-five miles.

- Dwarf anteaters are the size of squirrels and are a delicacy in parts of South America.

- The country with the highest suicide rate is Lithuania. (Forfeit: Sweden)

- Tangent: Two urban myths invented by the film industry: A ship's captain cannot marry people, and lemmings do not jump over cliffs. (The lemming myth was later corrected in Series "D", as the myth was actually invented in a children's encyclopaedia in 1905.)

- Tangent: When Stephenson's Rocket was introduced, people were concerned that travelling at such high speeds could cause irreparable brain damage.

- The twenty-third tallest tree in the world is a giant sequoia called "Adam".