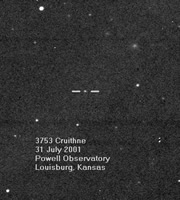 - The number of people killed by sharks since records began is equal to just five per cent of the number of toilet-related injuries in the USA in 1996.

- Both tigers and weasels make a "Fuff" sound when they attack.

- Tangent: The national symbol of Croatia is the weasel.

- The best way to escape from a polar bear is to remove one's clothing, piece-by-piece, and leaving it on the ground while backing away.

- An alligator can be rendered helpless by placing a rubber band over its jaws.

- The Earth has two moons. Cruithne is an asteroid sometimes described as Earth's second moon. (Forfeit: One) Correction: Since 2006, Cruithne has been classified not to be a moon. In In Series B it was claimed that the number was between one and five moons. In Series K it was revealed that there are now about 18,000 "mini moons" as defined by NASA.

- 90% of the Universe is unaccounted for; it is believed to be made of dark matter.

- Tangent: Claims that "Ikea" stores have no windows to decrease customers' awareness of the passage of time.

- The colour of the Universe is beige.

- There are eight planets in the Solar System. Pluto does not meet the usual criteria for classification as a planet. (Forfeit: Nine)

- Tangent: William James' exchange with a woman who believed the Earth was balanced on top of a giant turtle, on top of another turtle, and so on into infinity.

- "Krung Thep" is an abbreviation of the proper name for the capital of Thailand. (Forfeit: Bangkok)

- The earliest known soup was made from hippopotamus.

- No man-made objects can be seen from the Moon with the naked eye. (Forfeit: Great Wall of China)