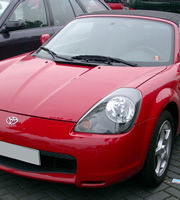 - Gerber baby foods was poorly marketed in Africa, because people though they were selling babies. This is because in Africa most people cannot read so packaging always represents what is inside the jar. The jar had a picture of a white baby on it to show it was baby food. However, people thought that the food contained babies, and white babies which did not like any local children. The picture of the baby on the jar was of Anne Turner Cook, later to become a novelist. Correction: Most Africans can read - between 50-60%.

- Tangent: Strand cigarettes advert "You're never alone with a Strand," was a spectacular failure. Queen Victoria smoked when in Scotland to keep midges away during picnics.

- Tangent: The creator of the London Eye shares the same birthday as Gustave Eiffel.

- The Toyota MR2 is an embarrassing name in France, because "MR2" sounds similar to the Frenchword "Emmerdeur", meaning "A pain in the neck". Similarly, the Ford Pinto is embarrassing in Brazil, because "Pinto" is slang for "Tiny male genitals".

- Brendan Behan was asked to write an advertising slogan for Guinness. He wrote, "Guinness makes you drunk." (Forfeit: Guinness is good for you)

- Tangent: "Guinness is good for you" was written by Dorothy L. Sayers.

- The ancient Greeks believed that otters killed crocodiles by running into their open mouths, eating their entrails, and running out again.

- "Raphanizien" was the ancient Greek punishment for adultery, where a radish was forced into the adulterer's anus. The word "Raphanizien" means "To put a radish into an anus."

- Tangent: "Subbuteo" is named after the "Hobby", a subspecies of buzzard.

- Tangent: When the Pope is elected, he is carried over a group of the cardinals, to check he is a man. This dates back to Pope Joan, where a woman masqueraded as a pope.

- The ancient Greeks voted for the leaders until they were invaded by the Macedonians.

- Tangent: Michael Portillo, when he was a Tory hopeful, once ran up a newly laid concrete footpath. When the constituent opened the front door, Portillo said he was a Labour party candidate and ran away.

- No centipede has ever been discovered with 100 legs. They range from 30-382 legs. It is always an odd number of pairs.

- In 1994, 35,000 Americans insured themselves against alien abduction. Most of these insurance policies are bought by others as a joke birthday present.

- Purple rhymes with two words - "Hirple", meaning "To walk along dragging one leg behind the other. Halfway between a walk and a crawl," and "Curple," meaning, "The hind-quarters of a horse." (Forfeit: Nothing)

- Spam is very popular in Hawaii, there are even spam carving contests held. The word is a portmanteau for "Spiced Ham".

- At least 2,370 tigers live in Texas, about a third of all the tigers in the world. Most are kept as pets.

- Green Bay, Wisconsin, is the toilet paper capital of the world.