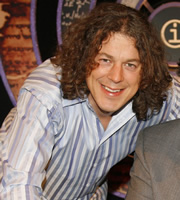 - The aeroplane was invented by John Stringfellow. (Forfeit: The Wright Brothers)

- A person might have, "Mad, bad, fat, sad old git," on their luggage because they are airport luggage codes.

- Madonna's plan for the prettiest airport in the world is to buy Compton Abbas Airfield in Dorset, and shut it down.

- The smallest aircraft carrier in the world is a Mitsubishi Shogun.

- Tangent: The Shogun is known in the rest of the world as the "Pajero" except in Spain, where it means, "One who fiddles with himself for sexual pleasure."

- Tangent: Julia Morris once worked on the Japanese island of Hokkaido, known for producing good milk.

- It was a bad idea to ban smoking on aeroplanes because companies now recycle air, increasing the threat from viruses.

- The Alan tribe live on the Russian border, in the Northern Crocuses Mountains, where they were driven by the Huns in the 4th century. Pliny the Elder described them as, "A race of bastard degenerates."

- Edgar Allan Poe predicted the Big Bang theory, the theory of relativity, parallel universes and the structure of the atom in a prose poem called Eureka.

- Alan Smithee is the Alan with the worst reputation in Hollywood. It is a name used by film directors when they disown a film. Alan Smithee credits

- In Boy on a Dolphin, Sophia Loren had to walk in a trench due to Alan Ladd being so short.

- The first man to circumnavigate the globe was Juan Sebastian Elcano. (Forfeit: Magellan)

- The helicopter was invented by the Chinese. (Forfeit: Italian)

- Tangent: The modern helicopter was invented by the French.

- Nothing happens when you suck your pencil, because it was made out of graphite, the crystallised form of carbon. (Forfeit: Lead poisoning)

- A third of the world's languages are spoken in Papua New Guinea. The official language is English, but most speak in Pidgin English. "Prince Charles" is rendered as, "Number one pickaninny belong Mrs. Queen." A male contraceptive is a, "Gummy belong cock." A helicopter is, "Magimix belong Jesus."

This episode is also known as "Alan".