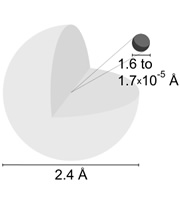 - The main component of air is nitrogen (Forfeit: Oxygen)

- The most boring place in Britain is a field outside Ousefleet, near Scunthorpe, according to the Ordnance Survey map. It containing nothing except half an electricity pylon and some overhead cabling. It is the blankest square kilometre in the country.

- Tangent: Charles Dickens claimed that Chelmsford was, "The dullest and most stupid spot on the face of the Earth." He also invented the word "Boredom".

- Barbara Cartland holds the world record for the most books written in a single year, with 23 books. She was buried in a cardboard coffin beneath an oak tree planted by Elizabeth I.

- The ozone layer is 15 miles above the surface of the Earth and smells of geraniums.

- Atoms are mostly empty space. Ernest Rutherford compared the inside of an atom as being, "like a few flies in a cathedral."

- The discoverer of hydrogen and the creator of the grand piano knew each other and lived locally. A hydrogen atom has more frequencies than a grand piano.

- Tangent: Hans Holbein, who once painted Henry VIII, once did a painting called "The Ambassadors", which can only be seen correctly from the correct angle.

- The word "Silver" rhymes with "Chilver", which is a female lamb. (Forfeit: Nothing)

- All diamonds in the world come from the Earth's surface, and are brought to the surface by volcanic eruptions. (Forfeit: South Africa)

- Tangent: South Africa is the fifth largest producer of diamonds, after Australia, the Democratic Republic of the Congo, Botswana and Russia. Diamonds and graphite are both made out of pure carbon, but appear on opposite ends of the Mohs scale of hardness.

- Light can travel at 38 mph, through sodium chilled at -270 degrees celcius. The speed of light is only constant in a vacuum.

- A chameleon changes colour depending on mood. (Forfeit: Background)

- Tangent: Chameleons can swivel their eyes independently. It was once believed they lived on air.