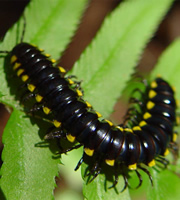 - Tangent: When James Cook arrived in Australia, he was only a lieutenant.

- The word "Aborigine" was first used to describe pre-Roman people.

- The word "Kangaroo" means "Horse" in the Begangi language. The word originates from the Guugu Yimithirr language for the animal we know today as the kangaroo. (Forfeit: "I don't know")

- Homo sapiens and apes both evolved from a common ancestor that has yet to be discovered, known as the "Missing link". (Forfeit: Apes)

- The Hehe tribe of Tanzania got its name from its war cry.

- Tangent: Jo Brand talks about a friend who gave stupid answers to "Trivial Pursuit" questions. These included, "What two countries can see from the top of Mount Kilimanjaro? - India and Spain," and, "What is the other name for the 'Northern Lights'? - Blackpool."

- In Swaziland, it is bad manners to shield one's eye from the sun with one hand, and forbidden to point at the King's hut.

- The speaker of the Swazi Parliament was sacked in 2000 after he stole a cowpat belonging to the King, Mswati III.

- Henry VIII wiped his bottom using the hands of the Groom of the Stool, a servant.

- The word "Set" takes up more pages than any other word in the Oxford English Dictionary.

- An "Arthropod" is an animal with more than one joint in its legs.

- The male European earwig has a spare penis.

- A "Bug" is an insect that has sucking mouth parts.

- The highest amount of legs discovered on a millipede is 710, on the South African millipede. (Forfeit: 1,000) Correction: In Series K it was revealed that another millipede has been discovered with 750 legs.

- More people have been killed by ducks than atomic bombs, due to them spreading Spanish flu in 1918. The outbreak killed more people that military causes in World War One.

- No animals bury their heads in the sand. (Forfeit: Ostrich)

- Tangent: The myth that Ostriches bury their heads in the sand was invented by Pliny the Elder.

- Rubber boots were invented by Amazonian Indians, by stepping knee deep in liquid latex until it dries. (Forfeit: The Duck of Wellington)

- Tangent: The word "Arachnid" comes from a Greek myth, about a woman called Arachne, who challenges Athena in a weaving competition. She lost, and as punishment, shrivels into nothing is forced to weave for all her days.