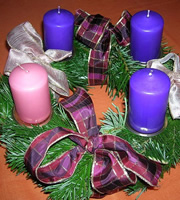 - Each panellist has to draw a Christmas tree. Alan made the mistake of drawing the branches pointing downwards, when in fact the branches go upwards.

- A "Gripple" is a gripping device, invented in Sheffield. Gripples are used to hold up Christmas lights, and also hold together the world's largest fence, the Great Dingo Fence in Australia.

- After dogs, the first animal to be domesticated was the reindeer.

- Another common name for the reindeer in North America is the caribou.

- A male reindeer would fancy Rudolph the Red Nose Reindeer because Rudolph is female. We know this because she is always shown with antlers at Christmas, and only female reindeer have antlers around Christmas. However, it is also possible that Rudolph is castrated. Eunuch male reindeers also keep their antlers.

- In "days of yore" Yorkshiremen gathered around their beehives because they believed the bees would start humming on midnight to symbolise the birth of Christ. They also claimed they hummed correctly after Britain changed from the Julian calendar to the Gregorian calendar.

- Mince pies were banned by Oliver Cromwell because they symbolised Catholicism.

- Between 1840 and the beginning of World War Two, the German village of Lauscha provided most of the world's baubles. At one point 95% of U.S. baubles came from Lauscha. "Lauscha" means "Eves-dropper" in German.

- In 1908, U.S. insurance companies tried to ban the placing of live candles on Christmas trees because people kept getting injured.

- Tangent: The first ever life insurance policy was not claimed because the underwriters defined a year on their own terms.

- During the 1870 siege of Paris by the Prussians, the city ran out of food, so one restaurant came up with the idea of eating rats.

- Tangent: There is a Chinese dish called "Three squeak". It is so called because it involved a rat that squeaks three times - When you pick it up, when you dip it in the chilli sauce and when you bite into it.

- Paris, London, Poland and Banana are all places in the Christmas Islands.

- The youngest age at which a person can drink in a restaurant beer garden in the UK is 5. It is only illegal to purchase drink at the bar if you are under 18. (Forfeit: Eighteen)

- The modern-day image of Santa Clause comes from the poem Twas the Night before Christmas.

- Genghis Khan said that the Sami people of Lapland were the only people he would never fight, because the Sami always hid from him. The Sami have never declared war on anyone.