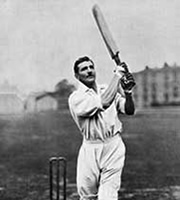 - Elephants can become drunk by eating fruit which ferments in their stomachs. Correction: This is a myth. The fruit they eat does not ferment in their stomachs. The only way an elephant can get drunk is to have an alcoholic drink.

- A "Bradford" is a cocktail that is shaken, not stirred. The "Vesper" cocktail was invented in Casino Royale.

- C. B. Fry could jump backwards onto a mantelpiece from a standing position without losing his balance, held the world long-jump record, played in an F.A. cup final, could speak several languages, and was offered the throne of Albania, but turned it down.

- Tangent: It is possible to jump across a canal by using weights and skimming across.

- The Albanian language has several words for eyebrows. A Vetullushe is goat with brown eyebrows.

- The "Pink fairy" is a type of armadillo. The "Green Fairy" is a nickname for absinthe.

- Benjamin Franklin thought it would be a good idea to find a way to stop flatulence from smelling bad.

- Tangent: Franklin was not allowed to draft the U.S. constitution for fear he would jokes in it.

- Fingernails and hair do not grow after you die. The skin tightens creating the illusion of growth.

- Tangent: Banana plants walk up to 40 centimetres in a lifetime.

- The phrase, "Survival of the fittest" was invented by Herbert Spencer, who also invented the paper clip. (Forfeit: Charles Darwin)

For the correction, see The Second Book of General Ignorance.