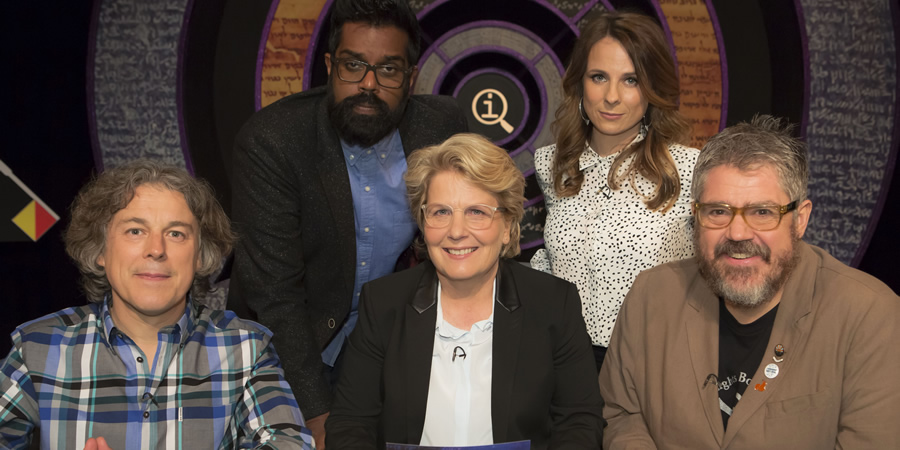 - Who, or rather WHO, is offended by diseases being given insensitive names. The World Health Organisation is concerned about illness names that might be consider offensive now. Examples include Spanish Flu, because it might offend Spanish people (people might think you would get Spanish flu by going to Spain), as well as Legionnaire's Disease (no legionnaire has ever suffered from it), Creutzfeldt-Jakob Disease, Swine Flu (offensive to pig farmers) and Sudden Death Syndrome (the name causes distress).

- Tangent: Doctors use a wide range of acronyms. These include SBI - Something Bad Inside (the doctor doesn't know what you've got); SVBI - Something Very Bad Inside (the doctor's doesn't know what you've got, but it will kill you); CBT - Chronic Biscuit Toxicity (you're fat); BW - Beached Whale (you're fat); and PRATFO - Patient Reassured And Told To F Off.

- Tangent: The first occupational related disease was chimney-sweep's scrotum. Other occupational diseases include bagpiper's fungus, which is caused by not cleaning the bagpipes and inhaling the fungus.

- The panel are shown a picture of a bird and are asked what its name is. The bird is a superb fairy-wren, and each of their nests has a family name, distinguished by their birdcall. The mother lays the eggs, waits for nine days, and then sits on the eggs and starts singing a unique tune. She sings the same tune every four minutes, over and over, for a week. The chicks in the eggs remember this when they hatch, so when the parents leave the nest to get food and return, the chicks sing the tune, and so the parents know that isn't a cuckoo in the nest.

- Tangent: Phill's mother would use a very loud whistle using her fingers to call him and his brother home for tea. He says he could hear it three miles away. One time he and Alan were in Manchester and Alan needed to get a taxi to the train station. Alan loudly shouted "Taxi!" but the taxi didn't stop. Phill gave his loud whistle and the taxi stopped for Alan 50 yards away.

- Tangent: Horses have a signature whiney to recognise each other. If one horse knows another and they hear the whiney of a different horse altogether, the first horse is scared.

- The woman who sold seashells on the seashore was Mary Anning. She was a Victorian fossil hunter who was the inspiration for the rhyme and one of Britain's most influential women in science. Loads of her exhibits are now in the Natural History Museum and her work was really dangerous. Her beloved dog Tray died in a landslide. The reason her discoveries were important was that until the 1820s many people believed that extinctions could not happen because it implied that God's creations were less than perfect. Anning discovered the first ever ichthyosaur skeleton correctly identified, the first two plesiosaur skeletons, the first pterosaur skeleton outside of Germany, and several dinosaur coprolites - fossilised dino poo. She proved that they were manure by cracking one open and discovering fish scales and teeth inside them. The rhyme comes from the fact that she was poor (her cabinet-maker father died when she was 11) and she had to sell the fossils to make money. One problem is that she sold fossils to men who later wrote papers about them, and she got a lack of credit due to her being a woman. She could not join the Geological Society of London, which didn't admit women until 1904. Anning did not get full credit until 163 years after her death. The Royal Society included Anning in a list of the ten British women who have most influenced the history of science. (Forfeit: She)

- The panel are shown a list of neologisms (new words) and are asked to define them:

- Adorkable: Someone who is socially inept but charming with it.

- Belfie: A selfie of your bottom.

- Cauldpress: Scottish term for a fridge - a "coldpress".

- Tangent: No-one knows where the word "quiz" comes from. It used to mean an eccentric person, but no-one is sure on the origin of the modern day meaning. One story is that Richard Daley, a theatre proprietor in Dublin in 1791, made a bet that within 48 hours he could get a word into common parlance, which he did by distributing the word "quiz" to be put in walls all over Dublin and it then became part of the language. The term "quizzing", as in the police "quizzing a suspect", comes from "inquisitive".

- Tangent: A new word is created in the English language every 98 minutes or so.

- XL: The panel play "This Little Piggy" with Alan's foot. Alan is told to imagine his big toe is No. 1, his next toe is No. 2 and so on. He closes his eyes and Romesh touches his toes. Alan has to say which toe is being touched. When his second toe is touched, he says "No. 3". This helps to prove the results of a 2015 study at Oxford where people closed their eyes while someone pressed on their fingers. The subjects were right 99% of the time. They recognise their big and little toes 94% of the time, but between the second and third toes we struggle, with only about half the people getting it right. Lots of people find it difficult to keep track of their toes entirely, with nearly half the subjects reporting that it felt like one toe was gone.

- XL Tangent: Alan gets annoyed at the audience again, because some of them are disgusted by his foot, so he does a V-sign at them.

- XL: Out of everyone on the panel, Alan is the most common, in the sense that his surname is the most common. According to the website Namespedia, Ranagnathan is used 1,789 times in 26 countries; Lloyd is used 65,467 times in at least 46 countries; Jupitus has no reoccurrences anywhere because his family's actual Lithuanian was "Seputis", but when his family arrived in 1917 some official named them "Jupitus" instead because that is what he heard; Davies is in at least 47 countries; Toksvig is used 23 times in 3 countries, but the website lists all the people who use the name - they are all relatives of Sandi, but she is not on the list herself.

- XL Tangent: According to Sandi, "Ranga" means: "Source of amusement for others", and "Nathan" means: "he will give". Toksvig means: "River by the burial ground".

- XL Tangent: There was an entire group of Indo-Iranian people in the Caucasus Mountains called the Alans, that has now died out.

- Out of a non-routine operation or a mass deposition event, chances are you would prefer the latter. A non-routine operation is a phrase used by Trans-Florida Airlines to mean a plane crash, while a mass deposition event is a term used by archaeologists for a huge pile of poo - to be exact, a huge layer of horse manure at the Col de la Traversette that is believed to be associated with Hannibal's cross of the Alps in 218 BC. The team analysing the layer are hoping to find elephant droppings. One team member said: "There's even the possibility of finding an elephant tapeworm egg. This would really be the pot of gold at the end of the rainbow."

- Tangent: Sandi's favourite airport sign is one in China that reads: "Delayed due to some reasons."

- XL Tangent: A nondiscernible microbionoculator was a poison dart gun used by the CIA.

- XL Tangent: You wouldn't want to be caught in bed with a Norfolk Howard because it is a bedbug. The was a man who was named either Bugsy or Joshua Bug at the turn of the 20th century, who hated being called "Bug" so much that he changed his name to Norfolk Howard, and people taking the micky out of him they started calling bedbugs Norfolk Howard, until it got to the point that it became a standard term.

- XL: There is no single place where all the Vikings who died in battle went. Only half of them go to Valhalla. The rest went to the goddess Freya's field in Folkvangr. Women also went to Folkvangr as no women went to Valhalla except for Valkyries. If you died a natural death who went to Hel, ruled by the goddess of the same name and from where we get our word "Hell". (Forfeit: Valhalla)

- The cause of the first mass extinction was the invention of the mouth. Ediacarans were the first ever complex life forms on Earth. After 37 million years of existence the Cambrian explosion occurred about 542 million years ago, and sea anemone-like creatures evolved with mouths and anuses, and began to eat the edicarans.

- There were no self-confessed Nazis. The Nazis never referred to themselves by that word. They were called that by German exiles.

- XL: The French for, "non de plume" is: "non de guerre", although now the phrase: "non de plume" is starting to be used by the French themselves. Among writers who use non de plumes include Voltaire, who had 173 fake names; and Daniel Defoe, whose real name was Daniel Foe; and Benjamin Franklin.

- XL Tangent: A man named Tuesday Lobsang Rampa, who claimed to be a Tibetan monk who wrote a book called "The Third Eye" in 1954. However, he was actually a plumber from Plympton named Cyril Henry Hoskin. Rampa/Hoskin refused to back down though, saying that the soul of the original Rampa inhabited his body after he fell out of a fir tree in his garden in Thames Ditton while trying to photograph an owl.

Where does the word "quiz" come from?

Here's the first look at Sandi Toksvig hosting QI. She asks the teams what some new words mean.

When Sandi Toksvig tells Alan Davies he's got something wrong, he says: "You've got it. You're in the right chair"... referring to her correcting him like Stephen Fry used to.