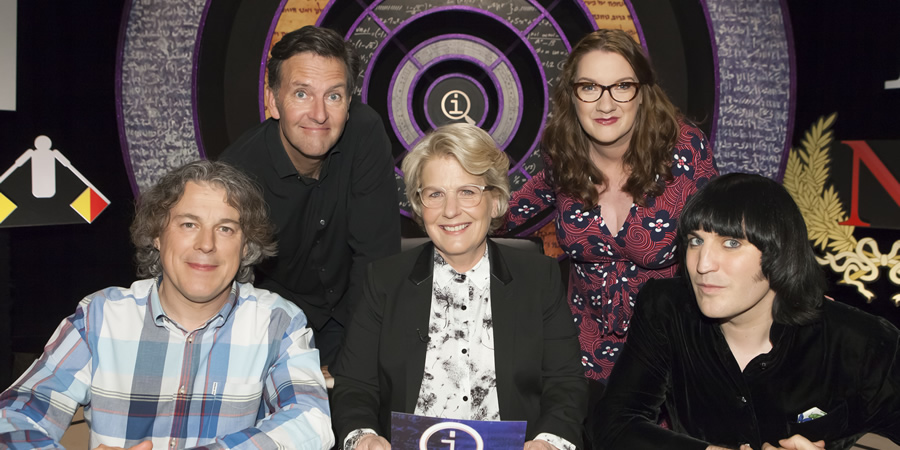 - The panel are shown some numbers and are asked what is interesting about them:

- 1. It is an Egyptian hieroglyph of a man holding his hands up, possibly called either "Huh", "Huuh" or "Huh-huh-huh-huuuh", but we have no idea how it is pronounced as there were no vowels in hieroglyphs. The hieroglyph represents 1,000,000.

- 2. A Mayan pictogram of an eye, representing the number zero. The Mayans had the idea for the concept of zero in 30BC, at a time when the Greeks and Romans didn't have the number. Europe didn't use zero until the 13th century.

- 4. 8,000,000,085, which if wrote out of all the numbers between one and ten billion in words, would be the first odd number to appear alphabetically.

- XL Tangent: Colin says that he was bullied at school. He says that a kid stole his lunch and gave him a wedgie, and then he decided to give up teaching. In Sandi's last school report it said that, "Sandra has a tendency to overdramatise."

- XL Tangent: In London the No. 43 bus goes to Friern Barnet.

- XL: The thing that we can do about the international poo shortage is encourage other animals to produce more manure for the purposes of fertilisation. Because so many of Earth's larger animals are dying this has had an effect on smaller animals. Land fertilisation has fallen by 8% since the ice age. Meanwhile, faecal nutrients in the ocean are at only 5% of what they were historically. Thus, because whales are dying, their poo is not fertilising plants that are normally eaten by krill, so krill are also dying. "Trophic cascade" is when the top predator helps the ecosystem.

- XL: The thing that dice, old English churches, lava lamps, neon and the rapper Eminem all have in common is that they have been used to produce random numbers. You can get random numbers by simply rolling dice (unless they have been loaded in some way). The first table of random numbers was produced in 1927 by taking the middle digits from area measurements of 41,600 English churches. In 1996, Lavarand took pictures of lava lamps and extracted the data from the pictures to produce random numbers. At Florida State University, George Marsaglia created a list of 4.8 billion randomly produced noughts and ones by taking certain rap songs including those of Eminem and turning them into digital files. Computers do not produce random numbers. Instead they are pseudorandom, because their ways of producing numbers are based on some form of pattern.

- XL Tangent: In Ancient Greece, they used random selection to create political appointments, using a process called "sortition". In Venice, the Doge was selected by using nine lots, while in Britain we select juries randomly.

- The Danish government convinced its citizens to multiply to save their schools. In 2015, local authorities in Thisted, Jutland, planned to close the local school, angering the residents. To stop the school from closing, a deal was stuck encouraging people to procreate in order to keep the school and local leisure facilities open.

- Tangent: The third thing on a list of things to do in Thisted, according to the town's own website, is visiting the candle shop.

- Tangent: Britain has had panics about falling populations, normally after wartime. In 1921, the Daily Express ran a competition to find Britain's largest family. The News of the World once offered a free tea tray to any mother who gave birth to her tenth child.

- Tangent: France gives a medal out to people who have large families, called the Medaille de la Famille Francaise. You get a bronze medal if you have four or five children, silver for six or seven children, and gold for eight children or more.

- XL: In Wales, you can have eight great nights out in a single week. The Welsh for "week" is "wythnos", which translates as "eight nights". If you start counting a week on Sunday night and you finish on a Sunday night, then there are eight nights in a week. In old English the day used to begin at sunset, so Wednesday night in Anglo-Saxon times would be Tuesday night today. In some Muslim countries where Friday is the holy day you have Friday, Saturday weekend, and then the working week starts on Sunday.

- XL Tangent: Another word for half a fortnight is a "sennight". The term is used in Jane Austin's "Pride and Prejudice" where Mr. Collins says he will trespass on someone's hospitality from Monday, November 18th to the Saturday sennight following. Charles Dickens said that fish and overnight guests are exactly the same, in that they both go off after three days. His remarks might have something to do with the time when he has Hans Christian Andersen as a house guest, who was incredibly annoying.

- The panel are given some cakes and are asked how to cut it into two pieces of exactly equal size, using three cuts, and in such a way that the cake is still moist so you can have some tomorrow. According to Francis Galton, who was obsessed with trying to share his Christmas cake with his wife in an even manner, you should cut out one slice which is the length of the whole cake (using two cuts), remove this centre slice and cut it half so you can eat it now, and then push the two remaining halves together.

- XL Tangent: In Chinese economics, "cake theory" is the debate about whether it is more important to divide the cake fairly or to bake a bigger cake.

- The worst place in the world for nuisance calls is the Pacific Island of Niue, which for a time had the fewest telephones of any place in the world. In the early 1990s, people were constantly woken up in the middle of the night by heavy breathers. This was because the island was home to an extremely lucrative sex line business and people often dialled the wrong number. There were only 387 telephones on the island, and the phone numbers only had four digits.

- XL Tangent: When Sandi was a child her family had a holiday home in the country, but there so few telephones around that her phone number was seven.

- XL Tangent: Sandi once picked up the phone and the person at the end of the line said: "You're supposed to be a fax." She didn't know how to respond.

- Tangent: Belgium had sex lines, but these were later banned. Belgium now has cookery lines, which has recipes read out in the sexiest way possible.

- Tangent: The show makes its own nuisance call, because Sweden has a phone number known as "Ring a Random Swede", which anyone can dial and be put through to a random Swedish person. This line was created by the nation's tourism authority to celebrate 250 years of freedom of speech in the country. They ring the number, which is answered by a man from South Sweden, named Robin. Robin is asked a question from a member of the audience which is: "Why do the Swedes eat rotten fish?" Robin replied, "Yeah, most of us also want to know this question. So, if you get an answer, please call back again."

- XL Tangent: Robin says that he has not heard of QI. The Swedish have their own version called "Intresseklubben".

- XL: You might be worried if you are a 9-ender. According to a study by Adam Alter and Hal E. Hershfield of New York University, people who have the number nine at the end of their age are more likely to be looking for purpose in their lives. These people are more likely to be registered on dating websites looking for extramarital affairs, more likely to run marathons, to do better in marathons, and commit suicide. Famous examples of 9-enders doing strange things include Buddha, who renounced all of his possessions aged 29; Agatha Christie, who published her first book aged 29; Alexander Graham Bell, who transmitted his first sentence via telephone at 29; Sarah Millican, who started doing stand-up at 29; Peter Schmeichel, who won his first Premiership winner's medal aged 29, and his son Kasper won the same medal aged 29 too. Both played as goalkeepers and both came from Denmark.

- The panel play a game of "How many people in the audience". The panellists have a coloured card, and all the audience members who have the same coloured card have to stand up. The number of people standing is equal to one of five answers which are: "Built the Eiffel Tower", "MPs in the House of Commons", "Selfie fatalities in 2014", "QI contestants" and "Children from a single mother". Each panellist has to guess the right answer relevant to the number.

- Colin: 230, which is the number of people it took to build the Eiffel Tower, in a period of two years.

- Sarah: 69, which is the world record for children born to a single mother. The mother was Valentina Vassilyev, who had 16 pairs of twins, seven sets of triples and four sets of quadruplets over 40 years, between 1725 and 1765. She had 27 births. When she died, her husband Feodor remarried and had a further 18 children.

- Noel: 49, which is the number of people killed when taking selfies in 2014. 16 died from a fall, four from a gunshot, and one was killed by an animal. The most common place to die from taking selfies is India, followed by Russia.

- Alan: 625, the entire audience, which is also the number of people who died of autoerotic asphyxiation in 2014.

- In terms of numbers, the most common vertebrate in the world is the bristlemouth fish, of which there are a dozen per square metre of the ocean surface. This fish is smaller than a human finger, but can open its mouth to reveal needle-like teeth. It glows and eats even smaller creatures called copepods, which are not vertebrates. They live in the sea between half a mile and three miles down, and until the 21st century we didn't know how many they were, until we used really fine dredging nets. The most common animal in the world is an invertebrate, the nematode worm, which represent four out of five animals in the world. (Forfeit: Humans; Chickens; Rats)

- XL: They type of bricks they built No. 10 out of were yellow. They look black because of pollution, and when they were cleaned in the 1950s and 60s they decided to paint the walls black that is what everyone was expecting them to look like. The reason the zero is slightly askew on the door of 10 Downing Street is that it is a homage to the old number which also slightly askew. The White House is also built out of yellow bricks, as it is made with sandstone that is painted white. (Forfeit: Black)

- The word "noon" comes from the word "nun", which meant "nine". But if you met a ninth-century nun at noon, the time you would noodle off to the nunnery should be 3pm. Until the 12th century, the word "noon" meant "three in the afternoon". It goes back to Christian prayer times. It began at the "prime" or the first hour, which was 6am; then it went to "terces" or the third hour, which is 9am; "nonny" was the ninth hour. (Forfeit: 12; 9; None)

- Sarah Millican: -26 points (but is declared the winner by Sandi as a way of apologising to her, because Sandi was meant to be doing a gig with her, but let her down because she got the job of hosting QI)
- Noel Fielding: 1 point
- Colin Lane: -9 points
- Alan Davies: -41 points

A random Swede is called so the audience can ask why the Swedish eat rotten fish.