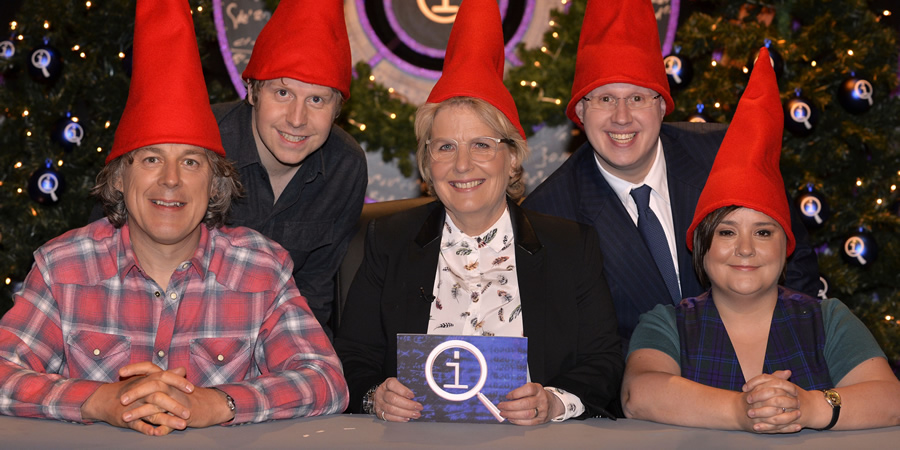 - The Christmas special has a Danish theme. The whole panel are wearing big red pointy hats because they are dressed as "nisse", the traditional Danish Christmas elf. In Denmark they have a competition on Christmas Eve to see who can find a whole almond and the winner gets a pig made out of marzipan. The winner of tonight's episode will get the marzipan pig as a prize.

- According to a recent survey, the Christmas tradition that the British most want to see preserved is parlour games, followed by carols and paper decorations. Thus, the panel play the Victorian parlour game of "taboo", in which the players are asked a question and have to answer it without using a taboo letter of the alphabet. As it is Series N, the taboo letter is "N".

- Matt: The tasty yellow fruit that is mostly grown in the Caribbean and Central America, which in the Philippines the name has been corrupted to "bayabus", is guava.

- Susan: The name for a woman who looked after Victorian children whose mothers were social equals but couldn't be bothered to do the job themselves is "au pair". Au pairs have been around since the 1840s and term literally means: "social equal". (Forfeit: Nanny)

- Josh: A Roman Catholic religious woman who has taken simple vows of poverty, chastity and obedience is called a "sister". Nuns take solemn vows which are different. Solemn vows repudiate property absolutely, whereas a simple vow allows the sister to reserve an interest in property. (Forfeit: A nun)

- XL Tangent: Alan tells an old joke. You say to a phone operator: "Is that the operator on the line? Then get off the line quick - there's a train coming."

- Spoon Licker, Doorway Sniffer, Sausage Swiper and Meat Hook are four of the 13 Icelandic Santas or "Yule Lads". Each one leaves a gift for children on successive nights starting on 12th December. Other Yule Lads include Pot Scraper, Bowl Licker, Sheep Cot Clod and Window Peeper.

- XL Tangent: In Scandinavia, one Christmas symbol is the julebuk, the "Yule Goat". In Gavle, Sweden, they have built a giant "Gavlegoat" every year since 1966, made out of straw and measuring 42 feet high. However, every year vandals try to destroy it and most of the time the vandals are successful. The goats have been kicked to pieces, had their legs removed, one has been hit by a car and they have been damaged by fireworks. In 1968, a couple climbed the goat and had sex inside it. In 2010 someone tried to steal the goat using a helicopter. It has been destroyed by arson 34 times, once by firing flaming arrows at it.

- XL Tangent: In the summer, Santa goes to Denmark for the World Santa Claus Congress. Julemandskongres occurs every July, takes place at the Bakken amusement park, is three days long, and the only rules appear to be that the participants cannot smoke or drink whilst in uniform.

- In Denmark, another Christmas tradition is that, on Christmas Eve, everyone holds hands and they sing while standing around the Christmas tree. The panel recreate this with the help of Helen Arney and Steve Mould from Festival of the Spoken Nerd, who bring out two amplifiers: one playing traditional Danish Christmas music, the other connected to a speaker. Both amplifiers have exposed cabling and when the wires touch you can hear the music. The panel all hold hands around the desk, with Josh also holding the wire for the music and Matt the wire for the speaker. When everyone is holding hands with each other, it makes a circuit and the music plays. It works because the salt in people's sweat conducts electricity better than normal water, which constitutes around 70% of the human body.

- XL: A piece of garbled up piano music is played and the audience are asked if they can hear the words to that music. Some can hear the words, as the piece of music in question is a MIDI file consisting only of the musical notes of "All I Want for Christmas Is You" by Mariah Carey. People familiar with the song will think they hear the vocals mixed into the track, even though it isn't actually there. This is known as "top-down processing", where the brain uses information it already has to try to interpret the world.

- The panel are played a festive noise that sounds a bit like a fart. It is actually the sound of a partridge taking off. The name of the partridge comes from the Greek "perdesthai", meaning "to break wind", and is so called because of the rapid fluttering noise it makes when it flies away. (Forfeit: Grandpa)

- XL Tangent: No-one is sure of the origins to the lyrics of "The 12 Days of Christmas". It might be possible it is a mistranslation from the French. The French for partridge is "une perdrix", which the British may have mistaken for "a pear tree", and thus the lyric should be: "A partridge, a partridge". The Scottish have a different version of the song (which Susan claims to have no knowledge of) which goes: "The King sent his lady on the first Yule day a papingo-aye. Wha learns my carol and carries it away?" A papingo-eye is a parrot. The Scottish version also features an Arabian baboon, three hinds a-merry hunting, three stalks o' merry corn, a goose that was grey, three starlings, three goldspinks and a bull that was brown. The Faroe Islands also have their own version, in which the recipient gets a feather and 14 rounds of cheese.

- XL Tangent: Susan claims that sprouts are lovely for breakfast (with eggs), something the rest of the panel do not agree on. In 2010 there was a sprout drought where bad weather caused a shortage, meaning they cost up to £9.55 per kilo; just 31p cheaper than turkey.

- XL Tangent: Susan did her online shopping recently and accidentally ordered one mushroom rather than one packet of mushrooms. The mushroom arrived in a separate bag. In the same order Susan thought she ordered four onions, but instead she ordered four sacks of onions. In order to get rid of them she offered bags of onions to her neighbours.

- The panel play another parlour game, a British game called "Are You There, Moriarty?" In this game, the players are blindfolded and each hold a rolled-up newspaper in their right hand. One player holds the other player's free left hand and asks, "Are you there, Moriarty?" The second player replies, "Yes", and then the first player has to try to hit the second with their newspaper, based on where they think they heard the reply coming from.

- XL: The British ruined Christmas for everybody by inventing tipping. The British created the idea of giving tips to tradesmen at Christmas, which used to be called the Christmas pot, and the Americans complained about it. In the 1860s, Americans said that tipping was turning their country into "the land of the fee". In the 1890s, Christmas was considered the worst time of the year because of excessive tipping. Now it is very much the reverse, with American workers wanting to be tipped for just about anything and the British really resenting it. In Denmark, tips are called "Drikkepenge", while in French it is called "pourboire", and in German it is "Trinkgeld", which all mean "drink money".

- A Siberian getaway car looks like a reindeer-pulled sled. These sleighs are faster than the snowmobiles used by the Russian police, and now the police are planning to create a reindeer division.

- XL Tangent: Rudolph's nose was not that useful because reindeer can see perfectly well at night. Reindeer change the colour of their tapetum lucidum, which is a layer of tissue behind the retina that reflects light. In long, bright summer light it is gold; in the winter it turns blue, which gives them a kind of night vision as less light escapes from their eyes.

- Tangent: Reindeer have hairy noses and are unique among deer for being attracted to the smell of human urine.

- XL Tangent: Josh has two female cats, but a male cat keeps coming into his garden and he doesn't want him there. Josh has been told to mark his own territory to prevent the male cat from visiting by weeing in the garden, but Susan says this makes no difference.

- XL: If you are standing in the middle of the Antarctic and your toes are frozen, the distance you have to travel to reach a place where it is too hot to stand is just a few kilometres - straight down. Antarctica's underground temperature is the hottest in the world. It is hotter than 99% of the rest of the planet, and the temperature under the ice goes up by 200ºC per km.

- The road that is haunted by the hairy hands of Dartmoor is the B3212. The B3212 runs across Dartmoor between Exeter and Yeovilton via the hamlet of Postbridge. In the episode Monster Mash, Josh wrongly claimed that the hairy hands haunted the B3021, but this road goes from Old Windsor to Datchet in Berkshire. (This fact was corrected by Ian Dunn, also known as Ian Wolf, the British Comedy Guide's data specialist and the author of the QI episode guides. He wishes to apologise to Mr Widdicombe for any inconvenience caused.) (Forfeit: The B3021)

- If you are cutting out a five-pointed star out of a piece of paper, you only need to cut one straight line. According to the "Fold and Cut Theorem", any shape composed of straight lines can be made out of a single cut if you fold the paper correctly.

- Tangent: There is a presumably apocryphal story about Betsy Ross, the woman who is alleged to have created the first US flag. She was discussing the design with George Washington who wanted six-pointed stars in the flag. Ross said that a five-pointed star would be easier to make and she showed Washington how to make one using a single cut. The problem with this story is that if you go to Philadelphia and visit Ross's house, it is almost certain that she didn't actually live there or make the flag.

- You would consume the original Humpty Dumpty by drinking it. The earliest citation in the OED for the term is for a drink made with ale, boiled with brandy. In the original rhyme, Humpty Dumpty was a child. Some people think the rhyme might have been a story about Richard III, who was hunch-backed and famously depicted by the Tudors as such.

- XL Tangent: In Colchester, they believe that Humpty Dumpty was a cannon from the Civil War that was on the city walls, but there is no evidence to support this claim.

- Tangent: The traditional food eaten in Denmark on Christmas is Aebleskiver, which is a small pancake eaten with jam. The panel are given some made by Danish chef Bronte Aurell from the Scandinavian Kitchen in London, which they eat while drinking some Humpty Dumpty.

- Everyone is made a winner, but the marzipan pig is awarded to Alan. (Alan's 30th victory)

- The panel solve a Christmas equation together. The equation is:

Matt Lucas & panellists play 'are you there Moriarty?'

The panel play a parlour game.