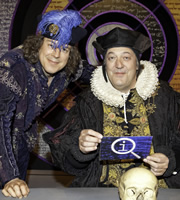 - The panel are all dressed in Shakespearean costumes.

- When David Tennant played Hamlet at the RSC, Tchaikowsky played Yorick's skull. Andre Tchaikowsky, a fond Shakespearean, asked that when he died that his skull should be used in actual performance of Hamlet. This caused some health and safety issues, such has having to order a human tissue license in order for him to appear on stage. Also, the funeral directors thought that cutting the head off the body might be illegal.

- XL: The Scottish play that Shakespeare wrote really is Macbeth. There are several reasons why Macbeth is considered unlucky. The play was often performed when the one before it suddenly closed, as it is the shortest of Shakespeare's tragedies and it usually attracted a good audience. But the specific reason was due to a hoax. In the late 19th century wit Max Beerbohm wrote a review of Macbeth in 1898 and made the story up about the play being cursed. In a 1942 production of Macbeth starring John Gielgud four people died (two witches, Duncan and the scene designer). The set was then redesigned for a comedy and the principle in that died too. The 1930s-1940s actress Diana Wynyard once played Lady Macbeth and thought it would be more convincing in the sleepwalking scene to have her eyes shut. However, she walked off stage and into the orchestra pit.

- XL Tangent: Other theatre myths include not whistling backstage. This is because that was the cue to let people know that the scenery was coming down.

- XL Tangent: The panel suggest that using superstitions could be a way to stop people from leaving their mobile phones on. Stephen was once in a theatre when someone's mobile phone went off, and the actor on stage just exclaimed, "Oh, for fuck's sake!"

- XL Tangent: Ralph Richardson was once on stage and asked if there was a doctor in the house. A doctor put his hand up and Richardson said: "Oh, Doctor, isn't this an awful play?"

- XL Tangent: Pia Zadora starred in a production of The Diary of Anne Frank in which she was not going down well. When the Nazis came on stage someone in the crowd heckled "She's in the attic!"

- XL Tangent: Richard Harris once went on stage drunk and fell down on the stage floor drunk. Someone in the audience shouted "Harris is drunk!" at which point Harris stood up and said: "If you think I'm drunk, wait till you see O'Toole." There is another story in which Peter O'Toole got drunk with someone else in a pub and they both decided to see a play. O'Toole nugged his friend and said: "You'll like this; this is where I come on... Oh, fuck!"

- XL Tangent: Bill was in a production of Twelve Angry Men during a very hot summer. On one performance one of the members of the jury fainted. So everyone else had to carry him off stage, and Bill noticed that the audience were perplexed, asking themselves that they could not remember a bit in the play in which one of the jurors dies. On another occasion a woman in the audience fainted and cart-wheeled down a flight of stairs. As she fell she knocked someone out of a wheelchair. The woman's boyfriend came to help her but he fainted too so a pile of bodies piled up on stage.

- Leonard Bernstein's musical version of Romeo and Juliet set in New York was originally called East Side Story. At the time of writing it in the 1940s the musical had gangs of Catholics verses gangs of Jews in the Lower East Side. Five years later, this was changed to Puerto Ricans verses white gangs, who are from the West Side. Other musicals based on Shakespearean plays include Kiss Me, Kate which based on The Taming of the Shrew, The Lion King which is based on Hamlet, and The Boys from Syracuse which is based on The Comedy of Errors. Non-musical modern adaptations of Shakespearean plays include Prospero's Books and Forbidden Planet which are both based on The Tempest. (Forfeit: West Side Story)

- The thing that Sigmund Freud, Mark Twain, Henry James, a loony from Newcastle and the Holy Ghost all have in common is that they did not believe that the plays of Shakespeare were written by Shakespeare himself. Professor Looney wrote a book in 1920 called Shakespeare Identified in which he claimed this. The Shakespearean sceptic movement began in the 19th century, with some people claiming that the plays may have been written by Francis Bacon. An insane American woman called Delia Bacon wrote a 625 page book claiming Shakespeare did not write the plays, but made no reference to Francis Bacon. When she died she claimed she was the Holy Ghost. Other candidates for the authorship include Christopher Marlowe and the Earl of Oxford, Edward de Vere. Freud had an Oedipus complex theory about Hamlet. Looney claimed that after the Earl's death in 1604 (at which point Shakespeare was still alive) he left lots of plays which his servant Shakespeare then produced. More modern sceptics include Mark Rylance and Derek Jacobi. There is however no real evidence to support the sceptics claims. While sceptics claim we know little about Shakespeare, we are also very few Elizabethan people we know more about.

- XL: In terms of words that he wrote, we have very few surviving examples of Shakespeare's actual handwriting. His signature was spelt differently all the time and his handwriting was very poor. It could be the case that Shakespeare dictated the plays and someone else wrote them down.

- XL Tangent: Famous examples of writers dictating to other people writing down what they say include Barbara Cartland, who used to lie on a sofa while she dictated, and A.A. Gill, who suffers from severe dyslexia.

- Tangent: Shakespeare used about 20,000 words. If you compare that to the modern day vocabulary that is half as much as a modern day Briton.

- Tangent: The linguist David Crystal made a study of The Sun newspaper to see if its readers had a poorer vocabulary that other people. He calculated that there would be 6,000 different words in any issue, whereas the King James Bible has 8,000.

- Shakespeare is credited as coining over 1,000 new words. Amongst the words that did not catch on include boggler (someone who hesitates), kickie-wickie (an affectionate term for a wife), quatch (someone who is fat) and wappened (corrupt). Words that he used and did catch on include accessible, acutely, assembled, barefaced, beguiling, bewitchment, cloud-capped, critic, even-handed, eyeball, foul-mouthed, football, Frenchwoman, hot-blooded, insulting, hunchbacked, laughable, leap-frog, marriage-bed, moonbeam, mountaineer, neglected, overpower, pageantry, promising, published, radiance, revealing, rose-cheeked, sanctimonious, satisfying, schooldays, silliness, suffocating, time-honoured, three-legged, useful, well-behaved and well-bred.

- XL: Dangerous Dan Tucker cleaned up Shakespeare by killing all the criminals living in it and making it a ghost town. Shakespeare, New Mexico, was a lawless town, and then violent Sheriff Dan Tucker came in to clean it up. Before coming to Shakespeare he was city marshal in Silver City. While he was deputy sheriff he killed a drunken man who was standing in the street throwing rocks at people. When he came to Shakespeare, in a few months he shot dead a cattle rustler, killed a man who rode into a hotel riding a horse, arrested and hanged the outlaw Russian Bill Tattenbaum for stealing a horse and hanged Sandy King for, "being a damned nuisance." The people who tried to take out all the rude bits from Shakespearean plays were Thomas and Harriet Bowdler, who published children's editions of the plays. (Forfeit: He took out all the rude bits)

- XL Tangent: Nahum Tate wrote a version of King Lear with a happy ending, which was popular for over 100 years. At the end of a tragedy, a comic would usually come on stage and do some jokes about the tragedy.

- Shakespeare's Bottom got to Norwich by Morris dancing his way there. Shakespeare had a comedian playing his comic roles such as Bottom and Falstaff called Will Kemp, considered to be the funniest man in England at the time. Kemp had a falling out with either Shakespeare or whoever was running the company, so he left the company and as a publicity stunt Morris danced his way from London to Norwich. It took him three weeks, but over the course of nine days, hence the saying, "a nine days wonder". Kemp thought that he would be the one remembered rather than Shakespeare, but Kemp went to Italy, died in penury, and his gravestone simply reads: "Kemp. A man." After he left, the first play Shakespeare wrote was Henry V in which Falstaff dies offstage.

- A group of Morris dancers is called a "side". Nobody knows where Morris dancing comes from. It may be to do with the Moorish and to celebrate the expulsion of the Moors from Spain. It is not in any way pagan or mystical. The earliest we can date it to is the 14th century. There are 150 sides in the USA, and an Arctic side in Helsinki.

- You can not really best describe Richard III's appearance, but he certainly was not hunchbacked. This was propaganda against him during the Tudor period. One man called Polydore Virgil was a historian who tried to make Richard III as hideous as possible, because ugliness was associated with evil. (Forfeit: Hunchbacked)

- Cleopatra was beautiful in terms of her voice and charisma rather than her looks. She may have had a long, pointy nose.

- Christopher Marlowe died from being stabbed in the house of Mrs. Eleanor Bull by a man called Ingram Frizer, whom he spent the whole day with and then had an argument over a bill. The place in question could have been a brothel, but it certainly was not a tavern. The information was discovered in 1925 when the documents came to light. (Forfeit: In a tavern brawl)

- The thing that made Lord Byron limp was his withered leg, not a club foot. Byron hated his limp and was very athletic. He swam the Hellespont, he boxed and was worried about his weight (he could have been anorexic). He also spent a lot of money. He ordered batches of two dozen trousers which he wore only once, and ordered silk handkerchiefs in batches of a hundred. Each handkerchief cost nine guineas, which was the same as the average annual male wage at the time. He had to leave England because of a possible sex scandal involving his sister. He also kept a bear while he studied at Trinity College, Cambridge, which he was allowed to keep on the grounds that it was wild, not domesticated.

- The thing that the Queen can do that an idiot cannot is vote. The Royals do have the power to vote, but they choose not to. Lunatics can only vote during their lucid periods.