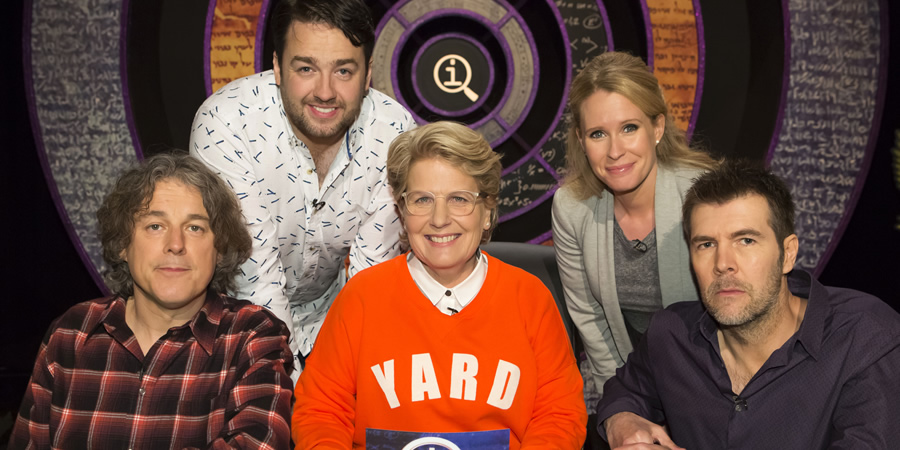 - Each of the panel talks about their favourite thing to have come out of Denmark (aside from Sandi, obviously).

- Tangent: Danish pasties are not from Denmark, but come from Vienna. The Danes call them: "wienerbrod".

- Tangent: Copenhagen is on the same line of latitude as Glasgow.

- Alan: Hygge. It is a word with no direct translation into English and means, "to get together with your friends, usually in candlelight, and to feel really mellow and enjoy yourself". This normally involves alcohol.

- Lucy: Saga Noren, the lead character in Danish drama The Bridge played by Sofia Helin, a character with Asperger's. Sandi points out that a problem with this gift is that Helin is Swedish.

- Jason: Lego, or as the BBC has to refer to it: "Generic Danish interlocking children's building set." Jason provides the studio with a Lego construction of the QI set.

- Tangent: Denmark is often voted the happiest country in the world. It is also the world's largest consumers of anti-depressants. The next happiest countries are Switzerland, Iceland, Norway and Finland. The UK is the 23rd happiest country, behind Mexico and Singapore.

- The main thing that Denmark leads the world in is human sperm exporting. Due to a shortage of UK donors and the fact that in the UK donors cannot be anonymous, about a third of the total amount of sperm used in British fertility clinics is Danish. Denmark is also the world's largest exporter of wind turbines and grass seed, the world's largest producer of insulin, and the home of the world's most popular toy. One other thing from Denmark that we probably use every single day is Bluetooth technology, which is named after Danish king Harald Bluetooth, who united Scandinavia. The Bluetooth logo is made up of his rune initials.

- Tangent: Alan suggests that Denmark leads the world in fairy tales, although most of Hans Christian Andersen's tales were dark. Jason talks about how in many children's TV shows and Disney movies that either one or both parents are often dead at the start of the story or die at some point.

- Tangent: Rhod asks if the reason why Denmark donates so much sperm is because it is so dark all of the time, confusing Denmark once again with Norway which does have long nights, whereas Denmark has relatively normal length nights. Both Sandi and Alan angrily argue with Rhod.

- XL Tangent: Denmark holds the following world records: The highest jump by a rabbit (99.5cm); The fastest time to peel and eat three lemons (28.5 seconds); and The fastest 100m in high heels (13.557 seconds for women).

- The thing that is moving towards Russia at 35 miles per year is the magnetic North Pole. Until 2015 it was in northern Canada, but it is slowly moving away from it.

- XL Tangent: You cannot find the magnetic North Pole by looking for it, because compasses don't work when you get near it. In air navigator's charts the regions near poles as referred to as a, "compass unreliable area" or a, "compass useless area", because the compass needle is pointing straight down.

- Hans Island, named after Inuit explorer Hans Hendrik, is a barren rock in the middle of the Nares Strait, a strip of water that acts as the border between Canada and Denmark-owned Greenland. Each country informs the other one if they are going to visit Hans Island. When the Danish military go there they leave a bottle of schnapps, and when the Canadian military go there they leave a bottle of Canadian Club whisky and a sign that says: "Welcome to Canada." There is some talk of the two countries turning Hans Island into a park.

- Tangent: Denmark once used pigs as a method of protest. When the Prussians invaded southern Denmark in the late 19th century they banned all Danish symbols, so people bred pigs so their markings looked like the Danish flag.

- XL: For its 100 birthday, Norway is going to give Finland a mountain. Finland has no mountains, so Norway is going to give it the Halditsohkka Peak in the Halti range, which lies on the border between the two countries, by simply changing the border. Although the mountain is only 4,366 feet and not even in the top 200 highest peaks in Norway, it will become Finland's highest mountain.

- XL: The impressive northern experience that Jason would like to share with Sandi right now is the Northern Lights. Depending on the strength of the solar winds, the Northern Lights can be seen as far south as Mexico and Eygpt. However, in the studio they have a Planeterrella, a polar light simulator which shows a mechanical demonstration of the effect. The machine is provided by Dr. Gabrielle Provan of the University of Leicester's Department of Physics and Astronomy (who is in the audience), and was designed by Jean Lilensten of CNRS, the French Centre Nationnal de la Recherche Scientifique. Different gases produce different colours: oxygen makes red and green lights, while nitrogen makes blue and purple. The Planeterrella was invented over 100 years ago by Kristian Birkeland of Norway.

- The thing that the North Koreans do better than anyone is making fake US dollars. These are known as "super dollars" due to their quality, and some people even say they are better than the originals. North Korea also makes the best fake methamphetamine, and their fake Viagra is said to be even better than real Viagra. They are also good at making giant statues of African dictators. The Mansuade Art Studio Gallery has made statues for Angola, Benin, Chad, the Democratic Republic of Congo, Equatorial Guinea, Ethopia and Togo.

- The panel are shown a picture of a dried-up river in North America. To be exact, what they are seeing is Niagara Falls with no water running down it, in a photo taken in June 1969. The water normally goes over three falls: the American, the Bridal Veil and the Horseshoe. The American falls had a load of debris at the bottom of it known as "talus" (Latin for "ankle") which was swirling and causing erosion. Thus a plan was made to divert the water away from the American falls and over the Horseshoe, drying up the American so it could be cleaned. The Alberta Elia Construction Company built a temporary dam in three days out of 28,000 tonnes of earth. During the clean-up they recovered lots of coins and two bodies.

- XL Tangent: Annie Edson Taylor, the first person ever to go over Niagara Falls in a barrel, doing so in 1901 aged 63, experimented by putting her cat in a barrel a few days earlier to see if the barrel would survive. After Taylor got out of the barrel herself she said: "If it was with my dying breath, I would caution anyone against attempting the feat. I would sooner walk up to the mouth of a cannon knowing it was going to blow me to pieces than make another trip over the falls." Another adventurer, Captain Matthew Webb, the first man to swim the English Channel, drowned when he attempted to swim the whirlpool rapids below Niagara Falls.

- Tangent: A waterfall in St. John, New Brunswick, Canada, twice a day flows uphill. When the tide reaches 28ft 6in it overtops the waterfall over which the St John river normally flows, and thus the river flows backwards.

- The worst disaster that doggers have ever experienced was when they were killed by a tsunami. Doggerland was a landmass which is now under the North Sea which connected Britain with mainland Europe (around the Netherlands and Belgium). It was populated by prehistoric humans, but first rising sea levels began to destroy the land, and then totally destroyed by a tidal wave caused by a massive undersea landslide in Norway in around 6000 BC.

- The panel are shown a Japanese-looking meal containing salmon. However, the dish actually comes from Norway. In the 1970s Japan didn't import fish and salmon was not on any sashimi menus. Then in the early 1980s there was a seafood delegation from Norway with a plan called "Project Japan", which was designed to sell salmon to Japan. It worked, and now Norwegian salmon is the sashimi fish of choice. (Forfeit: Japan)

- In some Japanese meals the "milt" of a fish is a delicacy. Milt is fish sperm and it is sprayed on the roe.

- Tangent: Alan says that "milt" is an acronym for "Mum in leather trousers". He claims that this is a Roger McGough line.

- The one untrue thing that everyone in Norway believes about lemmings is that they explode when they get really angry. This is the main myth the Norwegians have about lemmings, rather than the one about suicide. The myth about because lemmings got angry when approached so should be avoided. The Norwegians have a saying: "As angry as a lemming." (Forfeit: They jump off cliffs)

- The main source of sugar in Scotland is fruit. According to a 2015 study, 12.3% of sugar in Scotland comes from fruit. However, the next biggest sources are soft drinks, then confectionary, then biscuits and then cakes. 65% of the Scottish population are either overweight or obese. (Forfeit: Deep fried Mars bars)

The hours of daylight in Denmark

Sandi Toksvig and Alan Davies get annoyed at Rhod Gilbert for suggesting that Denmark has the same long nights as Norway.