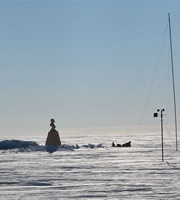 - Elephant in the Room 1: The last words of General John Sedgwick, who fought at the Battle of Spotsylvania Court House during the American Civil War were: "Why are you dodging like this? They couldn't hit an elephant at this dist-", and he was then shot in the left eye, falling down dead before he could finish the sentence. He was the most senior Union soldier to die in the war. Ulysses S. Grant mourned his death, claiming it worse than the loss of a division.

- Tangent: The "S" in "Ulysses S. Grant" does not stand for anything.

- The best purpose for a cat in a box, on the end of a parachute, is to drop cats into parts of the world where they are needed that cannot be reached via cars and road transport. Between 1959-61 a combined British and World Health Organisation project accidentally killed lots of cats when they killed mosquitoes using DDT in Sarawak, Borneo. The poison also killed cockroaches, which were in turn eaten by cats which then also died. As a result, the area became invested with rats, so new cats were parachuted in.

- Tangent: When Alan took two of his pet cats to the vet in his car, the cats escaped from their baskets during the journey. One urinated on the back shelf of the car. The other sat on the dashboard, meowing at him angrily.

- Two people killed many of the elderly in Great Yarmouth's Haslemere Home for the Elderly between 1960-61. The first was Gladys Elton (81), who performed a striptease. One resident had a heart attack and another five had to be treated for shock. The second was Harry Meadows (87), who dressed up as Death for a prank, complete with scythe. He knocked at the lounge room window, and beckoned the people inside to come out. Another three people died. The home was shut down in 1961.

- The Steller's Sea Cow was pink, had pendulous breasts, got sailors all excited and tasted of prime beef. After it was discovered by Georg Steller, people hunted them down and ate them to extinction. Steller was the first and last scientist to describe the creature. (Forfeit: Gladys Elton)

- Emperor Menelik II of Ethiopia brought two electric chairs believing they where a more humane method of execution. However, because Ethiopia had no electricity at the time, he used one of the chairs as a throne.

- Tangent: Stephen complains that he keeps getting static electric shocks.

- Elephant in the Room 2: In the 1916 Imperial Trans-Antarctic Expedition (Shackleton's expedition), the team was stranded on Elephant Island for four months. The island is so called because of its shape and the large amount of elephant seals that live there.

- At the very end of the Earth, at the Southern Pole of inaccessibility, there is a bust of Lenin that was erected there in 1958. In 2007, four Britions as part of Team N2i were the first team to reach the pole without mechanical assistance. One of the team, Rupert Longsdon, was in the audience during the recording. He reveals that during the expedition, one of the things they did was play 'Laxative Roulette'.

- The appendix helps the body because of its role in the lymphatic system. The largest appendix belonged to a man in Pakistan, measuring 9.2 inches. (Forfeit: Nothing)

- There is really no such thing as the "four minute warning". It was made up by the British Government as an excuse for the Americans to build an airbase in North Yorkshire.

- Tangent: During the filming of a cowboy film, where a scene involved a man standing on top of a ridge, a single tree on the hill was cut down to get a better shot. They later discovered that the ridge they found was called "One Tree Hill".

- The most isolated tree in the world was called the Arbre du Ténéré. It was an acacia tree in the Sahara desert which was 250 miles away from the nearest tree. It was destroyed in a car crash in 1973. A metal replica now stands in its place.

Vodcast of the "Endings" episode.