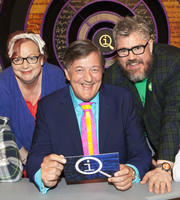 - The problem with the first contact lenses was that they were very large so fitting them onto your eyes was hard. They were originally made out of the bottom of test tubes. They were invented in Germany in 1880. One pioneer, August Muller, tried them but he could only wear them for half-an-hour, after which he had to use cocaine eye-drops to relieve the pain. They were originally used to protect sensitive eyes rather than to correct vision. By the 1920s-30s they became popular amongst the super-rich in America. They cost more than a car, and they were mainly brought by rich fathers for their daughters. In 1930s-40s no Hollywood actresses can be seen wearing glasses unless it was required for a particular part.

- The panel are given some objects from the British Optical Association Museum of some unusual old eyewear and they have to figure out what each item was for.

- Phill: A pair of tinted, leather-surrounded goggles, that were originally used to train pilots to get their eyes accustomed to night-time flying.

- Tangent: Josh originally suggests that Phill's goggles are rose-tinted spectacles and Phill talks nostalgically. Phill then claims they make everyone look like a Dutch prostitute and gets the other panellists to dance for him - something Stephen tries but hates doing.

- Alan: A pair of glasses with three smaller lenses on each larger lens which point to the sides. These were originally designed to help drivers improve their peripheral vision, but Alan claims they do not work.

- Josh: A pair of mid-19th century tinted glasses in which the lenses cover not just the front of the eyes but also go around the sides. These are designed for passengers on open-top railway carriages to protect their eyes from soot and smoke.

- XL Tangent: Phill, with regards to his Dutch prostitute theme, suggests he should have brought more Edam, which Stephen jokingly suggests is some kind of ecstasy cheese.

- Jo: A bonnet with a monocle sewn into it. Stephen claims she looks like Mrs. Norris from Mansfield Park. Phill claims that she does, but only if she worked in Colditz. Jo says she looks more like Mrs. Gamp from Martin Chuzzlewit.

- XL, Stephen: A fan, which has a secret lens in the centre of it, so you can see while your face is hidden.

- XL Tangent: Jo had a friend who took his elderly aunt to a theatre where there were opera glasses. The friend said they worked by putting the money in and then you could see what was going on onstage. However, the aunt didn't take the glasses out of the case, just looked through glasses, at the floor and said: "Can't see a thing!"

- The panel are shown footage of a lizard running and are asked what it is doing at the same time. One thing it is not doing is breathing. The lizard breathes while standing still, runs for a while, stops, breathes, and then continues running. Some people claim that human 100m sprinters also do not breathe during their races. (Forfeit: Breathing)

- XL Tangent: Stephen has a friend who was a judge in the Linford Christie lunch box case. The judge said: "What exactly IS a lunch box?" Stephen teased him about this, but it turns out the reason judges ask these sorts of obvious questions that most people know about is to ask on behalf on the jury to make sure everyone understands what is being discussed.

- Tangent: Josh claims he cannot walk and drink at the same time. Alan says this is common sense because of the vibration caused when you walk means it is more likely that you spill your drink.

- Tangent: Stephen gets the audience to demonstrate that it is impossible for you to move your right foot clockwise and to draw a number six with your right hand at the same time.

- XL Tangent: Stephen asks Alan when he is filming Jonathan Creek whether he suddenly forgets how to walk for some reason. Alan says he does not.

- The thing that has eight legs, sits in the middle of a spider's web and is not a spider is a dummy spider made out of dead skin and leaf mould by the original spider occupying that web. The dummy spider is five times the size of the real spider, and it is believed that it is made to either make other spiders think the web is occupied, or to scare other spiders away by making them think that the spider in the web is huge, thus making the dummy spider akin to a scarecrow. Some real spiders live inside the dummy spider. Two different species of spider do this: one in Peru, one in the Philippines. Given that these places are so far away, no-one knows for show how both species came to the same solution. It could be convergent evolution, or that some spiders managed to travel from one place to the other on driftwood, or as Alan points out it was just done by God.

- Tangent: Spiders do not eat their pray, they drink them. They wrap the pray in silk, dissolve them, and then drink the pray.

- You can never seem to catch the perfect centipede because when you try to catch one the centipede will try to protect itself by removing some of its legs and throwing them away to try and distract their predators. This is known as autotomy.

- XL Tangent: Alan remembers an old QI fact, which is that there is no centipede with 100 legs. All centipedes discovered so far have an odd number of pairs of legs, so you could find one with 98 legs (49 pairs) or 102 (51 pairs), but not with 50 pairs.

- XL Tangent: The leopard gecko of Pakistan can shed its tail to distract predators. The tail keeps on moving for 30 minutes afterwards.

- The body part beginning with "L" that Queen Victoria left to the Empress of France was a lock of hair. Victoria is mainly responsible for the idea of keeping locks of hair from deceased people, keeping a lock of Prince Albert's hair. The lock Victoria sent was to the Empress Eugenie, wife of Napoleon III. Empress Eugenie's full name was Dona Maria Eugenia Ignacia Augustina de Palafox-Portocrarrero de Guzman y Kirkpatrick. She was nicknaked "Carrots" because that was her nickname when she went to school in Bristol. She died in Britain. (Forfeit: Her labia)

- Tangent: Lord Bryon was so handsome and adored that women sent him locks of their hair. In return Bryon sent hair from his Newfoundland dog which the women did not notice. Phill jokes about Byron trying to do the clockwise-foot/six-in-the-air trick, which Bryon would have found hard to do with his club foot. Despite his club foot he managed to swim the Hellespont. Jo gives this fact, to which Stephen says that Jo pretends to be an ignorant pig, when in fact he meant to say that Jo pretends to be pig ignorant. Lady Caroline Lamb, one of Byron's many lovers, gave Byron locks of her pubic hair. She was the woman who said Byron was: "Mad, bad and dangerous to know."

- XL Tangent: There was a film about Lady Caroline Lamb starring Sarah Miles, the actress famous for drinking her own urine. Another urine drinker was Morarji Desai, who became prime minister of India at the age of 80.

- Tangent: Phill claims that a portrait of Napoleon III makes him look like a hipster.

- XL: You would put a leech on a leash because they were used internally. They were put up bottoms to deal with testicular problems or down the throat to deal with bronchial problems. They are also used on the scrotum for strained testicles. Leeches can be used today to re-stimulate blood-flow in certain severed body parts like a cut-off finger.

- Spending-a-Penny Bonus: The thing that Georgian men kept in the sideboard for after dinner was a chamber-pot. Frenchman Francois de la Rochefoucauld wrote about this habit which he found disgusting. Chamber-pots were used right into the middle of the 20th century because many houses had outside lavatories. Some chamber-pots had comic things printed on them. One photo of two pots shows them with the phrases: "Use me well and keep me clean; and I'll not tell what I have seen", with an eye in each pot, so the pot was looking at you whilst you did your business. During World War II you could by chamber-pots with pictures of Hitler in them, so you would pee and poo on him.

- XL: The kind of wine that goes best with human liver is amarone. In the original novel of The Silence of the Lambs by Thomas Harris this is the wine Hannibal Lecture drinks with liver, because this full bodied wine goes better with greasy liver. The makers of the film changed it because they thought most people would not have heard of amarone. What the Americans call "Fava beans" the British call "broad beans". (Forfeit: Chianti)

- XL Tangent: If you eat too much liver you can get Vitamin A poisoning. Livers can regenerate themselves. On the screen is a picture of a liver drawn by Leonardo da Vinci, who in his notes wrote in mirror-writing code. No-one knows why he wanted to keep it a secret, although Phill suggests it was for Dan Brown. If you take a small liver from a small dog and transplant a new liver from a large dog, the liver would grow to the size it would have been in the large dog. "Liver disturber" was 19th century American slang for a large penis.

- Nobody sat in the middle of the Last Supper, because the traditional Roman way of eating a meal was to lie on your stomach. It says in the Bible: "Now there was one leaning on Jesus' bosom, one of his Disciples whom Jesus loved." (Forfeit: Jesus)

- In an ant colony no-one is in charge. They are self-organising colony. All the queen does is lay thousands of eggs until she dies. (Forfeit: Adam Ant; The Queen)

- Tangent: Stephen compares the way the ants communicate amongst themselves to the way a flock of starlings or a school of mackerel move, or how a chant in a football match will suddenly start and then fade again. Alan jokingly says ants love football, to which Stephen says the biggest football fans are North Ants.

Alan Davies, Jo Brand, Josh Widdicombe and Phill Jupitus are shown old optical devices and have to guess their purpose.