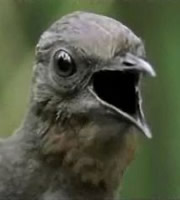 - The panel all carry masks of each other. Marcus has a mask of Jimmy's face, Jimmy of Marcus, Sean of Alan and Alan of Sean.

- The panel are asked to identify the sound of their buzzers:

- Jimmy's buzzer, which sounds similar to a camera, is actually a Superb Lyrebird, an animal which can mimic just about any noise. (Forfeit: Camera)

- Sean's buzzer, which sounds like a chainsaw, is yet again a Superb Lyrebird.

- Alan's buzzer, which sounds like a telephone, really is a telephone. (Forfeit: Lyrebird)

- XL Tangent: Other talking birds include parrots, mynah birds, and drongos. The drongo can mimic the calls of other birds, and also knows which call to mimic when it is with another bird. For example, if there is a kookaburra, then the drongo will call like a kookaburra. The world record for the most words spoken by a talking bird is 1,728, by a budgerigar called Puck in 1995. The reason why the word "Drongo" is used as an insult by Australians is because there was a 1920s racehorse called Drongo which lost almost every race it was in. Sean complains that horses are never given proper first names, but Stephen mentions a horse called Brigadier Gerard, and Marcus points out that in the 2008 Grand National there was a horse called Simon, which he backed and lost. Alan tells a joke in which a white horse goes to a bar and the bartender says, "We've got a drink named after you," and the horse says, "What, Eric?"

- The unusual thing about the pig-faced lady was that it was actually a drunk, shaven bear. It was part of a 19th century freak show.

- Tangent: There is a story of a famous bearded lady, Jean Carroll (b. 1910) who wanted to marry a contortionist, John Carson. The contortionist did not want to marry her though, because he didn't like the idea of marrying a woman with a beard. However, she couldn't shave off her beard, as she would then lose her main source of income. However, a friend of theirs, sword-swallower Alec Linton suggested she shaved but then covered herself in tattoos, becoming the first tattooed woman, and make money that way. She did so, and the two then married.

- Tangent: Samuel Gumpertz was a famous freak show owner in Coney Island. His freaks included Ursa the Bear Girl, Bonita the Irish Fat Midget, Lionel the Dog-Faced Boy and Schrief Afendl the Human Salamander. There is a legend that a salamander can survive a fire.

- Count Victor Lustig planned to sell Guy de Maupassant's favourite restaurant to two scrap metal merchants. Guy de Maupassant's favourite restaurant was the Eiffel Tower - because it was the only restaurant in Paris from which you could not see the Eiffel Tower, which he, along with many people in France when the Tower was first built, loathed. Lustig was a con artist who tricked two scrap metal merchants into thinking that he was an official responsible for selling what was then a temporary structure. The merchants 'bribed' him, and he ran off with their money.

- Tangent: Another similar conman was Arthur Furguson, a Scottish actor and con artist who also sold famous monuments and buildings. These included Nelson's Column (with lions) to an American tourist for £6,000; the Eiffel Tower as scrap metal to another American; and the White House to an American. He then attempted to sell the Statue of Liberty to an Australian, but got rumbled.

- Tangent: In 2008, businessmen Terry Collins and Marcel Boekhoorn, were conned out of £1,000,000 by unemployed bankrupt lorry driver Tony Lee. They 'bought' the Ritz Hotel from him.

- XL: The animal that would be interested in buying some snake oil is a mouse. Although the term "snake oil" today means "something that is not what it says it is - a con", it is actually full of omega 3. When given to mice, it helps them navigate around mazes quicker and helps their muscles. It is not yet known if humans would benefit from snake oil. Snake oil is made from the Chinese water snake. It first became well known in the 19th Century when Chinese immigrants brought it to America. The reason why "snake oil" has its current meaning is because merchants would say that the snake oil used by the Chinese themselves was rubbish and that they had the better stuff.

- XL Tangent: It is said that one of the most famous faces of the 19th century was Lydia Pinkham who invented "Vegetable Compound", a tonic with her face on the bottle. It was alcoholic so it became very popular during Prohibition. Lydia Pinkham is the basis of the 1960s song "Lilly the Pink" by The Scaffold.

- XL: The scandal of Mrs. Pankhurst and the rhubarb jam resulted in the leader of the suffragette movement setting up a jam factory. Raspberry jam was very popular in between the 19th and early 20th centuries, but it was expensive to buy, so all kinds of fake versions were made using other foods such as rhubarb (the best) and sweetened turnip (the worst). Fake wooden pips were added to make it look like the real stuff. The trade was so successful that there was, at one point, a profitable trade in making wooden pips. Emmeline Pankhurst was shocked however to see the terrible conditions that the women in these wooden pip workshops were under, so she founded her own jam factory during World War One, selling real jam.

- XL Tangent: In America, "Jam" is called "Jelly". What the British refer to as "Jelly" is known by Americans as "Jello". Peanut butter and jelly sandwiches are popular in the US.

- XL Tangent: When monkeys are used in adverts (such as PG Tips), peanut butter is put on the roof of their mouths to make them move their mouths for the voice actors. Jimmy also claims that this is how they make "Hollyoaks".

- The panel try some detective work. They see three buxom young women coming out of the telephone exchange carrying heavy suitcases and jangling. Is the jangling coming from A) The telephone exchange, B) The suitcases or C) Their bosoms? The answer is C. In 1950s Miami, these women were responsible for stealing hundreds of thousands of dollars worth of loose change from telephone exchanges. Their job was to put money into counting machines, but they worked out that as long as they stole the money before it was counted, the phone company would have no idea how much money there was. They hid the stolen money in their bras. After the crime was solved, one newspaper ran with the headline: "Justice as elastic as the items in which they carried their loot, snapped back today on members of Miami's brassier brigade."

- Tangent: The panel comment on how the tabloids would cover a similar story today, with Alan talking about the type of coverage such an event would get on Page 3. One of Alan's favourite such reports was when a Page 3 girl commented on how happy she was on the capture of Saddam Hussein. Sean's graphic depiction of a woman licking her breasts leads to Stephen claiming that he can do the same thing. When Sean asks if Stephen can fit a pencil under his bosoms, Stephen says he can fit Colin Montgomery under them.

- XL: Some more detective work. The panel are in the bath when the King of Syracuse calls and claims that his tiara is dodgy. The thing you would say is, "Eureka!". Archimedes famously shouted this when he discovered that as he went in the bath, the water spilled out, thus resulting in him discovering that you can tell the density of a substance by putting it in a bath full of water and seeing how much water flowed out. Archimedes put the tiara in the bath and showed that the crown was not made of pure gold because it was not as dense as it should have been.

- XL: Stephen described one of the panel via a series of statements, and the panel have to try and figure out who he is talking about. The statements include, "You tend to be too critical of yourself", "You have considerable un-used capacity that you have not yet turned to your advantage," and "At times you have serious doubts about whether you have made the right decision or the right thing." Actually, Stephen is describing all four of the banter-meisters. He is using what are known as "Barnum statements" or "Cold reading" - these statements are used by fake psychics and mediums. Other examples of Barnum statements include "Rainbow statements" which cover so many people they can be used to describe anyone, such as, "You have a very generous and giving nature, although if you are honest about it there are times in which you have acted in a very selfish way." There is also the "Vanishing negative", such as, "You don't work with children do you?" where any answer works in the questioners favour, and "Escape patches" such as "Does the name 'Wendy' mean anything to you?" in which a "Yes" answer will result in the questioner claiming they are a right, and a "No" answer resulting in the questioner saying there will be one in the future. These questions are also known as "Forer questions", named after the psychologist Bertram R. Forer. He got his students to fill out a questionnaire with these kind of questions, and all of the papers were identical.

- There is no trick behind sword swallowing, apart from being able to control your gag reflex. The 4,000-year-old practice really does involve swallowing swords. You can swallow a sword 40cm long without noticing any physical difference, according to the Society of Sword Swallowers. 61cm is considered the length limit. The most common medical complaint from sword swallowers is sore throats.

- Tangent: Sean claims that he gags when putting in contact lenses. He also jokingly claims that if you pull the tail of a Pekinese dog, its eyes pop out.

- XL: The Vegetable Lamb of Tartary was a sheep made from cotton. This mythical being, that was half sheep and half plant, was used to explain how cotton was spread in the 16th century.

- XL Tangent: Tartary is a place in the far-east near Mongola, where the Tartars live. Marcus jokes that a "Tartary" is a brothel.

- New London Bridge is in Arizona because American businessman Robert P. McCulloch brought it as a tourist attraction for his new settlement at Lake Havasu. It was the third biggest tourist attraction in America. (Forfeit: He thought he was buying Tower Bridge)

- If you went to the shops and could not get butter, you cannot get margarine instead, because it is not sold in Britain. The UK Spreads Association, formerly the Margarine and Spreads Association claim that there is currently no margarine on sale in Britain. Margarine contains between 80-90% fat and is white in colour. In the USA, 19th Century dairy lobbies, in particular the powerful ones in states like New Hampshire demanded that margarine should not be coloured yellow and, in some places, managed to insist it should be coloured red to put people off buying it. (Forfeit: Margarine)

- There are 613 commandments in the Bible. In the list of commandments that were given to Moses, there were 14 different commandments, as listed in the books of Exodus (in particular Chapter 20) and Deuteronomy. Other commandments are listed throughout Exodus. Less well known commandments include, "You shall not suffer a witch to live", "You shall never vex a stranger" and "Whosoever lies with a beast shall be surely put to death". (Forfeit: 10; 9; 8)

- Tangent: Sean argues that "Thou shall not kill", should be the most important commandment.