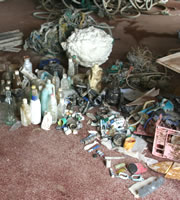 - This is the "General" show in Series F, covering a wide range of different topics beginning with "F".

- Each member of the panel has an International Maritime Flag:

- Charlie: R for Romeo, meaning "You can feel your way past me."

- Alan: D for Delta, meaning "Keep clear of me, I'm manoeuvring with difficulty."

- Stephen: U for Uniform, meaning "You're running into danger."

- XL: Semaphore is a similar language that uses flags. The symbol for "N" is to hold the arms diagonally downwards (one each side) and the symbol for "D" is right arm straight up and left arm straight down. If you stand them one behind the other it creates the "Ban the Bomb/Peace" symbol, because N.D. stands for "Nuclear Disarmament".

- Tangent: On The News Quiz (which Andy regularly appears on) there is sometimes a signer for the studio audience. Because it regularly mentions people in the news, some of sign language is rather appropriate. For Prince Charles, the sign language is to stick the ears out. For Bill Clinton, the signer opened his flies. In American sign language, the letter "R" is given by making an "R" shape with your fingers. Therefore, the sign language for Ronald Reagan is to give two "R's" (one with each hand).

- XL: Lord Nelson used flag signals during the Battle of Trafalgar. Nelson wanted to say to his men, "Nelson confides that every man shall do his duty." However, there were no flags for the words "Nelson" or "confides", so it became, "England expects every man shall do his duty." It would be possible however to do it letter-by-letter, but it would take too long to do.

- XL: The people who burn the most American flags are the Americans, in particular the Boy Scouts of America and the American Legion. If a flag becomes dirty, burning it is believed to be most dignified way to dispose of it. The Americans are unusual in that they have almost a religious view of their flag, where as countries like the UK reference national pride with things like the Royal Family.

- XL Tangent: Andy was a Boy Scout and he once went to Sweden to an international jamboree of Boy Scouts. The British Scouts were next door to the Americans, and the British were getting annoyed by the "squeaky clean" Americans, in particular the fact they always flew their flag every morning. So one of the British Scouts, the very quick John Pennington, ran, stole the flag, and fled into the woods. As a result of this the Americans threatened to leave, so a delegation came to sort out the mess and the British had to hand the flag back.

- The difference between flotsam and jetsam is that flotsam is debris which has washed up on shore because of a shipwreck (by accident), while jetsam is debris which has been deliberately thrown off the ship (cargo that is jettisoned). They are two of the four officially recognised kinds of debris. The other two are lagan, which is debris in the sea which can be rescued because it is normally attached to a buoy, and derelict, which is debris at the bottom of the sea which no-one can rescue.

- XL Tangent: If you find a piece of wreckage and claim it for yourself you can be fined £2,500. You have to pay the original owner twice the value that they paid for the goods. This is because of salvage rights.

- XL Tangent: If you run over a pheasant, kill it and pick it up, then that is a crime. If you pick it up after someone else has killed it, then that is legal. Alan found this out while filming Jonathan Creek. They were filming at an estate which had lots of pheasants, and so people had to drive slowly past them. This was because they were fed from a truck and so whenever a car came past, the birds thought it was feeding time. The best boy on the shoot however, go tired of slowing down so he drove quickly and killed six. The people behind him picked the bodies up.

- XL Tangent: In Australia, there are dead kangaroos often found near roads in the desert because they come to lick off the water from the road surface, and then get run over.

- Tangent: Stephen first thought that Ward's signature was to write his name using his own semen, which Ward referred to as 'Bat sperm'. However, Stephen is corrected by the QI elves - Bat sperm was Ward's euphemism for having sex with someone.

- Tangent: Rob says that stories of odd sexual encounters are more common and acceptable in showbiz. This leads Charlie to joke that there was a lot of sex during Dad's Army.

- There are two places where you can find the biggest flasher in the world. One is at the bottom of the sea, it is the dana octopus squid (the biggest flasher in the animal kingdom). The squid is the largest creature to be bioluminescent and uses its flashes to attack its prey. The other is the biggest flasher in nature, which is in the mouth of the Catatumbo River in Venezuela. Lightning strikes for 10 hours a day (up to 280 times an hour) for 180 days of the year. It is believed to be the world's greatest source of ozone. So much is released that it helps repair the ozone layer. Correction: During this question Andy asks if the Statue of Liberty is a lighthouse and is told it is not. However, during the end of the 19th century, it was used as a lighthouse.

- Tangent: Alan, who regularly goes diving, claims that at night all the ugly fish come out, mainly because they do not need to be pretty when it is dark.

- XL Tangent: Lightning bolts go up as well as down. As a result, when dead parties of tourists are found, people can use the cameras and see in the photos people with their hair standing on end.

- XL Tangent: The furthest place south where the aurora borealis has been seen is Rome, in the 1850s. Alan saw it in Edmonton, Canada. It is caused by solar winds. The version in the southern hemisphere is called the aurora australis.

- XL Tangent: When Alan was in Edmonton, a lightning storm came. Because the area around Edmonton is flat, people watched the storm for half-an-hour, getting closer to them, before they went inside. Alan was also in an electrical storm near Ayres Rock, while he was inside a helicopter. Rob was in a light aircraft in Sydney when a similar storm came, it made him 45 minutes late for a Rod Stewart concert.

- XL: A question on fragrance - the East German police (the Stasi) stole people's underwear to create a database of the smell of their dissidents. Cloths were used to take sweat from armpits and the groin region which could then be given to sniffer dogs. Then they made a chair which could collect sweat. When the Berlin Wall came down, people took jars containing the cloths and underwear collected during this time. The process of collecting smells can be said to be very German. As of last year, the Unified Germans have started making a smell database again, containing suspects relating to anti-G8 movements and similar protesters.

- Pope Alexander VI celebrated the feast of the chestnuts by throwing chestnuts onto the floor and getting naked prostitutes to forage for them.

- Tangent: Pope Formosus made such an enemy of his successor Pope Stephen VI that Stephen dug up Formosus's body and put his corpse on trial. Stephen spent most of the trial yelling at the corpse. Someone had to move Formosus's mouth and body as Stephen yelled. Stephen found him guilty, and Formosus was punished by have the three fingers he used for blessing cut off and his body was buried in a common grave. Stephen himself was deposed, imprisoned and eventually strangled. Another Pope, John IX, re-buried Formosus as a Pope again.

- No-one really knows who invented rugby football, although it is known to have been invented in British public schools. There were many early ball games which involved carrying the football, and early association football allowed players to hold the ball too. There is a myth that it was invented by William Webb Ellis (after whom the rugby union world cup is named), but the myth did not start until three years after he died. (Forfeit: William Webb Ellis)

- Tangent: Alan and Rob comment that photos of sporting teams are odd, in that Victorian ones show the team relaxed, whilst today they all stand in rigid rows. They comment that you would expect it to be the other way around.

- James Bond was an intelligence officer. An agent in the British Secret Service is an informant. (Forfeit: Secret Agent)

- Tangent: Sean Connery got the part of James Bond because of his walk. Ian Fleming said that he walked like a panther. The difference between your walk and your gait is that you can be recognised by your gait. Andy claims that Liam Gallagher has the funniest walk, while Charlie also comments on Mick Jagger's.

- Tangent: Alan and Stephen comment that Mick Jagger and Ian McShane are arse-less.

- The maximum number of times you can fold a piece of paper in half depends on certain variables. What you need is length and thickness. This was worked out by an American schoolgirl called Britney Gallivan. She demonstrated this by folding a long piece of thin lavatory paper 12 times. (Forfeit: 7, 8)

- Tangent: Andy says there was a section in the film The Queen which he did not believe. In it, a stag comes up to her and she shoos it away. Andy claims she or Prince Philip would have shot it.

- Tangent: When David Walliams swam the Channel he met the Queen with his mother. Prince Philip said to Walliams' mother, "Are there any more nutters in your family?"

This is the first episode to be given an extended repeat. See the QI Quibble Blog for the union flag and Statue of Liberty lighthouse corrections for more information.

A preview clip of the third episode in Series F. All you need is length and thickness.