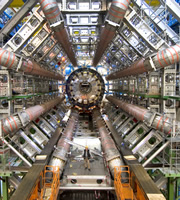 - The set is decorated with rockets and the inside of the desk is covered in lights. Stephen and the panel are all wearing silver sashes.

- Stephen begins by asking Alan what he is doing. The answer being that Alan is doing something because there is no such thing as "nothing". Ben goes onto explain that physics explains that nothing cannot exist, because of the creation and destruction of particles, as well as what some people believe to be the Higgs field, which gives elementary particles mass. This is what the Large Hadron Collider (LHC) at CERN is trying to prove the existence of. (Forfeit: Nothing)

- Tangent: There are four known forces in the universe: gravity, electromagnetism, nuclear strong force (which holds nuclei together) and nuclear weak force (which causes radioactivity). The latter three are all of a similar strength, but gravity is very weak. You can prove this by using a magnet to hold up a pin. Gravity is not able to pull down the pin which is held in place by electromagnetism. There is a belief that our 3 (or 4) dimensions are part of a much bigger space, and gravity permeates the other dimensions, of which there is believed to be 10.

- Tangent: Stephen states that another theory claims that all matter has corresponding anti-matter. He then references this theory to Rob and Ben, because they look incredibly similar (and horse-faced).

- XL: According to the Guinness Book of Records, the first known time capsule is the Crypt of Civilization in the basement of Phoebe Hearst Hall, at the university in Atlanta. It was placed in the 1940s. However, it is not so much a capsule as a large room. It will be opened in 8113 AD, because at the time people believed that human history began in 4241 BC (because that was when the first Egyptian calendar was made). Therefore, they took themselves as the mid-point in human history. The Crypt contains the Bible, the Koran, the Iliad and a windmill to provide electricity (in case they do not use electricity in the future) for all the electronic devices in the crypt.

- XL Tangent: Rob claims that a similar sort of time capsule that anyone can achieve is to write on a wall and then cover it with wallpaper. When you remove the wallpaper, you can see the old message. Stephen says that houses which have steps sometimes have barrels of beer hidden under the cement.

- XL Tangent: There are 10,000 time capsules worldwide, but most are lost. The International Time Capsule Society was therefore formed in order to make it easier to record the location of time capsules. There is also time capsules in space, such as the Voyager probe which had a gold disc with binary information on it. As mentioned in Series B, Carl Sagan decided not to put some of Bach's music on it because he thought it would be showing off.

- XL Tangent: According to the equivalence principle, alien life must exist elsewhere in the universe. Ben says that all of modern astronomy is based on the fact that we are not alone in the universe. Rob then asks if he said "Astronomy" or "Astrology". Rob says that the latter is rubbish. Stephen goes further - he says that anyone who believes in astrology should not be allowed to watch QI.

- Nothing in the laws of physics forbids time travel, but the reason why time travel has not yet happened is because there is yet to be a machine to start it from. Some believe that this machine is the LHC. They claim that, like telephones, you cannot have just one because it is useless. You need two to make it work. Therefore, in order for a time machine in the future to work, you need something like the LHC, because it might create wormholes and allow people to connect with it.

- XL Tangent: Ben says that the question of where all the time travellers are is similar to where all the aliens are. It is known as the Fermi Paradox, named after Enrico Fermi. Although there may be nothing in physics that prevents time travel, it is not strictly true, because of certain non-reversible physical laws such as the second law of thermodynamics. If you had a picture of a glass and a picture of the glass now broken, you could not take the picture of the broken glass earlier in time than the first picture. Therefore, it may be possible that humans can only live in a universe where time is experienced as a linear thermodynamic sequence, unless time is reversable. Stephen points out that if you were to travel near the speed of light towards a planet that might take you a minute to get to, on Earth four years would pass by. Therefore, it is possible to travel forwards in time.

- Tangent: The grandfather paradox asks what would happen if you could travel back in time and kill your grandfather. The answer is that you could not do this, because that would mean that you never existed.

- Tangent: Ben visited the LHC two weeks before the recording. Sean claims that his objection to this level of physics is that the average person cannot understand it. Stephen gives a similar example in the form of Michael Faraday, who pioneered studies into electricity. However, when Faraday talked about it during his day, it sounded nonsense to people. It was only when machines developed that could utilise electricity, people were able to understand it better.

- XL Tangent: Sean says that he has trouble understanding electricity and understanding how telephones work. Ben then explains how they work, but Sean still does not understand (probably because he was not paying attention).

- A series of questions concerning predictions:

- In 1955, Variety magazine predicted that rock and roll would be, "Gone before June". (Forfeit: May)

- In 1977, Ken Olsen, chairmen of DEC (Digital Equipment Company), said there would be no reason for anyone to have a computer in their home.

- Tangent: Alan references an earlier episode of QI to say that the earliest vacuum cleaners were very large and horse-drawn.

- St. Ambrose, the 4th century bishop of Milan, is the first person on record to be seen reading without moving his lips. This was observed by St. Augustine of Hippo.

- Tangent: Rob does his impersonation of Ronnie Corbett.

XL: When Sir Christopher Wren took over building the Corn Market in Windsor from a man called Fitz, he was forced to build four pillars in the middle of the building that were not needed. Therefore, as a way of making a point, he deliberately made the pillars too short to support anything. However, tiles have now been forced into the gaps because people still think it needs them. (Forfeit: To hold the roof up)

- XL Tangent: Rob claims that he had similar support problem when his housee extension was built. The extension fell down.

- Britain was invaded by robots in the 1940s. In the press, the word "Robot" was used to refer to the V1 and V2 rockets, although reference to them was avoided as much as possible in order to prevent the Nazis from knowing how successful they were. The word "Robot" comes from a Slavic word "Robota", meaning "Slave worker". It was popularised by the Czech playwright Karel Capek in his play R.U.R. (Rossum's Universal Robots).

- Tangent: Rob and Ben say that, in a way, Britain is today run by robots, in the form of call centres and CCTV. Rob and Ben like their conversation so much that they end up kissing each other.

- The language of the future appears to be Panglish (Pan-English). 80% of people who speak English as their second or third language speak Panglish. A similar version is Singlish, which is a mixture of English, Chinese and Malay. Words in Singlish include "Lay leo" which is "Radio", "Lolex" is "Rolex" and "Orleng tzu" is "Orange juice".

- XL Tangent: When Alan visited Singapore in 1988, someone thought he was "Lik Arsee" - Rick Astley. Rob goes onto talk about the Welsh language, where "Mini-golf" is "Golff-mini".

- XL Tangent: The Klingon language was devised by Marc Okrand. In it, there are words for an transport ioniser unit ("jolvoy'") and a bridge of a ship ("meH"), but no word for a bridge over water at the time of broadcast. Hamlet has been translated into Klingon. "To be or not to be?" is translated as, "taH pagh taHbe'"

- Tangent: Esperanto is an invented language designed to be easy to learn. There are only 900 words and no irregular verbs. Therefore, people who learn Esperanto take a year less to learn another language fluently. In Esperanto, "Saluton" is "Hello", "Cu vi parolas Esperanto" means "Do you speak Esperanto", and "Mia kusenveturlio estat plena da angiloj" means "My hovercraft is full of eels." This is a line from the Hungarian Phrase Book sketch in Monty Python's Flying Circus.

- XL: In the South American Republic of Guyana, between 2000-2005, 0% of the country's rainforest has been cut down, because a new tree is planted for every one which is cut. Guyana was an English colony. Therefore it is the only country in South America where English is the official language, and the only one that plays cricket. Correction: Suriname, another South American country also plays cricket after it was introduced from India.

- The distance of the horizon in miles is approximately equal to the square root of one-and-a-half times the person's height in feet from sea level. For example, if you are standing at sea level and are six feet tall, the horizon would be about three miles away.

- Fog kills more people in Britain than any other form of weather. This is because of increased traffic accidents due to poor visibility. The difference between fog and mist is the density. In fog, visibility is less than 1km, whereas in mist it is between 1-2km. (Forfeit: Wind; Snow; Hail)

- Tangent: Smog is normally caused by a mixture of fog and sulphur dioxide. The great smog of London in 1952 lasted four days and killed 12,000 people. The deaths resulted in the Clean Air Act. In Hawaii, they have vog, which is cause by fog and volcanic activity. Sean claims that the world "Vog" exists because Jewish people have moved there. This leads to Rob doing an impression of Jackie Mason.

XL: They will finish painting the Forth Rail Bridge by 2012. A new paint has been created that is a mixture of normal paint and epoxy resin, which will mean that the next paint job will last between 25-40 years. (Forfeit: Never)

For the correction, see the QI Qibble Blog.

A romantic preview to the future episode.