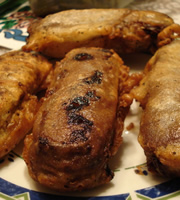 - Each member of the panel is given a wine glass. They will score 50 points if they can break it using only their voice. Alan's glass did break, but it was a trick glass with a small explosive. It is actually almost impossible to break a glass using your voice.

- You would want to smother Doon in goose-fat because she was covered in it when she swam the Channel. The first person to swim the English Channel was Captain Webb in 1875, who later died in 1883 trying to swim across the river at the bottom of Niagara Falls.

- Cummingtonite is a mineral discovered in Cummington, Massachusetts. Other comedy compounds include Penguinone, Arsole and Moronic acid.

- The deep-fried Mars bar is not an urban myth - it does exist. Other deep fried foods include the pork sausage kebab, with contains 1,000 calories and 46g of fat. Doon has eaten a deep-fried Curly Wurly, battered in her local chip shop in Fife.

- Tangent: Stephen attempts a wide range of Scottish accents, and tells the story of Maggie Smith, who was playing Scottish Miss Jean Brodie in The Pride of Miss Jean Brodie. She could not do a Scottish accent, but a friend of hers had an aunt in Morningside. Smith phoned her up asking her out to tea with a tape recorder to which the aunt said, "My dear, I have been told I have no accent whatever," and put the phone down insulted.

- The ordeal by bean is an outlawed Nigerian tribal custom where the accused is fed a poisonous bean. (Forfeit: Mr Bean)

- Tangent: 95% of the baked beans in the world are eaten in Britain.

- Big Beard Wang would regularly shave his pussy, because he was the barber to Chairman Mao. "Mao" is the Chinese for "Cat". "Mao" also means "Hat". Correction: Mandarin Chinese words have different meaning depending on how the word is pronounced. Therefore, the "Mao" in "Chairman Mao" means "Fur" or "Wool".

- According to one survey, most people would like to be 17-years-old. From a man's point of view, his ideal woman is half his own age plus seven.

- Technically speaking, a platypus is very small, becuase the playtpus is a type of beetle. The Duck-Billed Platypus and the Platypus are completely different from each other. (Forfeit: About this big)

- Tangent: Platypuses and echidnas are the only mammals to lay eggs. Platypuses also sweat milk because they have no nipples.

- A dialogue can have any number of people taking part in it. (Forfeit: Two - this is a "Duologue".)

- The Queen's handbag contains some money, a comb, a handkerchief, a small gold compact and a tube of lipstick.

- Tangent: The panel talk about what it is like to kiss men who have beards. Stephen then accidentally says he has kissed 15-year-olds.

- Tangent: The panel talk about Stephen's love of the Royal Family. Stephen says that he is not keen on all of them, to which Alan claims that Stephen thinks that Prince Edward "is a tosser".