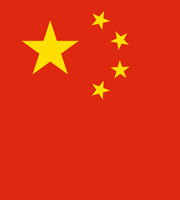 - Each panellist is shown what their names mean in Chinese:

- There are no inventions beginning with "C" that come from Corby. The town's main claim to fame is that it is the largest town in Europe not to have a railway station. (Forfeit: Trouser press - Invented by John Corby)

- The connection between Corby and a large bowl of porridge found on Mars is that there is a crater on Mars called "Corby". NASA became obsessed with Corby when telling the Apollo 11 crew about the World Porridge Eating Championship that took place there. Craters on Mars are named after towns with a population less than 100,000 people. The craters beginning with "C" include Cádiz, Cairns, Canberra, Charleston and Crewe.

- Tangent: Alan is presented with an "Alan potato head".

- Some houses in China are built using stone stolen from the Great Wall of China. There is only 20% of the Wall left. (Forfeit: Bamboo)

- Thomas Crapper invented the ballcock. (Forfeit: The Flush Toilet - Invented by the Chinese)

- Tangent: Thomas Crapper is an example of 'nominative determinism', where you are more likely to do a job if your name is connected to it. The verb "to crap" existed before his career.

- Chinese inventions also include the abacus, acupuncture, chess, the decimal system, drilling for oil, the fishing reel, flamethrowers, fireworks, the helicopter, the horse collar, iron ploughs, lacquer, the mechanical clock, the hot air balloon, negative numbers, the parachute, printmaking, relief maps, the rudder, the seismograph, the stirrup, the suspension bridge, toilet paper, the umbrella, the water pump and whiskey. Non-Chinese inventions include the rickshaw, chop suey and fortune cookies, which are all American.

- Tangent: MSG and umami - the other flavour.

- The Dalmatian who discovered China was Marco Polo.

- The Croatians invented something that no businessman would be without - the tie. (Forfeit: Corby trouser press)

- Coffee tights are tights with caffeine in them.

- Tangent: The urban myth about statues of military personal on horseback, mistakenly given as fact by Alan.

- Correction: At the end of the show Stephen tells a story of a man who went into one of the largest bookshops in Manchester, asking for a "Globe of Salford". It was believed at the time that there was no such thing, but it was later revealed in the Series G QI Annual that they do. "Globes of Salford" are old bottles with a globe logo on them made by Groves and Whitnall of Salford, considered to be collectibles.

- Tangent: Avon is the cosmetic company most favoured by transvestites because they visit people, and therefore who do not have to worry about buying goods over the counter. Stephen then talks about a shop in Camden, London called "Transformation", which is a shop transvestites, selling women's clothes for men. He has used this shop in order to get women's shoes his size (Size 13) for use in comedy sketches.

- Alfred the Great moved London 1,000 yards to the right.

- Tangent: Stephen asks "What do ladies' bits smell of?", a question which is mocked for asking because he is gay. Phill attmepts to do an East Anglian accent, but instead does a West Country accent.