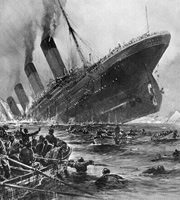 - "Doubt cards": One of the answers is false. If a panellist thinks the answer is "bollocks", they put up their card to score bonus points.

- The greatest raid made by Mosquitoes during World War II was when 12 of them rescued 12 members of the French Resistance, bombing the Amines Prison.

- The first thing to happen to the crew of the Titanic as it started to sink was that their wages were stopped. (Forfeit: They drowned)

- Tangent: The Duff-Gordon family allegedly bribed the lifeboat crew to save their lives.

- The difference between Able and Ordinary seaman is that Able seaman carry a log called a 'certificate of continuous discharge'.

- You can sink a ship using pistachios and walnuts because they spontaneously combust in water.

- The theory of relativity was invented by Galileo. (Forfeit: Einstein)

- Three-quarters of the women accused of witchcraft in England were acquitted. (Forfeit: They were burned)

- Tangent: Alan talks about a band he knew who performed a song called "Peter Cushing lives in Whitstable". Stephen goes onto talk working with Vincent Price and Christopher Lee.

- Pine is an example of a softwood. (Forfeit: Balsa wood)

- If you cut an earthworm in two, you get one dead worm in two pieces. (Forfeit: You get two earthworms)

- Tangent: A planaria is a type of flatworm discovered by T. H. Morgan. 1/279th can regenerate into an original full-size planaria.

- Instead of using a special space pen, astronauts can just use a regular biro in zero gravity. (Forfeit: A pencil)

- Doubt card: Neil Armstrong and the Mr. Gorski myth: The myth claims that when he was a boy, Armstrong hit his baseball into the next-door neighbours' garden, the Gorski's. Mrs. Gorski said, "Oral sex - I'll have oral sex with you the day that kid next-door lands on the moon." Alan is the only one to play his "doubt card".

- Correction: Dara's fact about the triple point of water which he mentioned in Series B is corrected. He claimed it was 0 degrees Celcius, but it is actually 0.01 degrees. (Forfeit: 0 degrees Celcius)

An extra on the forthcoming QI Series C DVD. An animated music video of the Peter Cushing song.