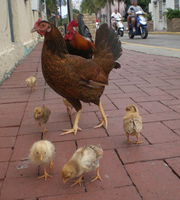 - A 'Genius Question': one of the questions is so difficult, that 100 points will be given if anyone gives the correct answer.

- The commonest bird in the world is the domesticated chicken.

- Tangent: According to the Kinsey report, 1 in 6 people in Iowa has had sex with a chicken.

- The inventor of the decimal point encouraged his servants to stroke his cock so that he could trap a thief. John Napier, who also invented logarithms and supposedly the machine gun, kept a jet-black cockerel as his pet. He had some thefts and he was almost certain it was one of his servants, so he told his servants to go into a darkened room, stroke his cockerel and it would tell which one had stolen it. What he did not tell them was that he had covered his cock in soot. So the ones who were innocent stroked the cockerel and had dirty hands. The thief avoided stroking it and so had clean hands.

- Tangent: A discussion on Piccadill ruffs.

- There is no difference between a "Chevin" and a "Chavender", as they are both names for the same type of carp. Carps are a kind of chub, which is were the word "Chubby" comes from. (Forfeit: A chav called Kevin; A chav in Eastenders)

- The fingerprints of a koala are very similar to those of a human. Marsupials, like the koala, are not mammals. Correction: Marsupials are mammals.

- The study of fingerprints is "Dermatoglyphics". Dermatoglyphics and "Uncopyrightable" are the longest words in English to contain no repeated letters.

- Tangent: The longest palindrome in the world is the Finnish word "Saippuakuppinippukauppias". The word means, "A travelling salesman who sells caustic soda to the soap industry".

- Tangent: Rory displays an extensive knowledge of the atomic numbers of all the elements.

- The "first" Prime Minister was Henry Campbell-Bannerman. Prior to this, all other PM's were referred to as "The First Lord of the Treasury". The term "Prime Minister" was originally used as an insult. (Forfeit: Walpole; Pitt the Elder)

- Tangent: Campbell-Bannerman's last words were, "This is not the end of me."

- Another name for the common cormorant is the seacrow. (Forfeit: Shag)

- Tangent: Rory and Stephen talk about the Latin names for birds. Sean gets fed up with them both and pretends to be sucked under the desk, claiming there is a portal to the underworld down there.

- The Queen has several cardigans, such as Cardigan Bay, but her corgis are Pembroke corgis, not Cardigans.

- The House of Lords smells faintly of urine because tweed is made using stale urine.

- Mr. Chicken lived at 10 Downing Street. He was the last private resident of 10 Downing Street before it became the home for Prime Ministers (or rather First Lords of the Treasury). (Forfeit: Kentucky)

- Tangent: The front door of 10 Downing Street can only be opened from the inside.

- Most historians agree that cannibalism has been practiced by humans, particularly as part of tribal customs. However, such tribes never boiled humans in large metal pots or cauldrons, because they would not have had the technology.

- Cannibalism was widespread in England during the reign of Elizabeth I, because almost every apothecary sold "Mummy powder", which was made using mummies.

- Tangent: Rory asks why talking about dogfish lead the panel to the "Pin the tastebud on the Catfish" competition.

- Tangent: Sean says that the better QI players should be handicapped to make it easier for the players who are not as good. Stephen then rants against his idea.

The recording of this episode was interrupted by a streaker. The streaker can be seen in the deleted scenes from the Series C DVD.