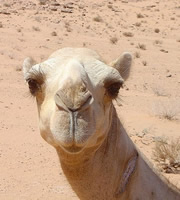 - Women have been shown to be able to 'smell fear'. Animals can smell the fear of each other, but not that of another species.

- John 'Cats-Eyes' Cunningham shot down the first plane by night in 1940 because he had radar. (Forfeit: Carrots)

- Tangent: The Carrot Museum in Berlotte, Belgium, is so small you cannot get into it.

- Tangent: Children around the age of two go off vegetables because the taste buds develop. It is designed to prevent children eating poisonous berries.

- Macro Polo was the first to hear the curious sounds made by the sand dunes, which he claimed sounded like the spirits of the desert. They can sound like grasshoppers or jet engines.

- Tangent: There are more molecules in a glass of water than grains of sand in the entire world.

- Tangent: The Gobi toad lives under the desert and waits every seven years for rainfall. They then mate and go back down again for seven years.

- Pliny the Elder amongst others believed that giraffes were a cross between a camel and a leopard.

- Since 1982, centenarians are sent a 'telemessage' from the Queen, provided they apply for it from the Anniversary's Secretary at Buckingham Palace. The difference between a telemessage and a telegram is that the former is sent in the post.

- Tangent: Stephen gave Prince Charles some coffee made from Cambodian weasel vomit as a wedding present.

- There is no word for a Roman who is in charge of 100 men. (Forfeit: Centurion - they were normally in charge of 83)

- There is some evidence that Nero helped try put the Roman fire out, which he later blamed on the Christians. Some also believe he played the bagpipes. His last words were, "What an artist dies in me." (Forfeit: Fiddled while Rome burned)

- Elephants were captured in ancient times by Ethiopian elephant catchers who would climb on top of one, hack at the back leg with an axe, and use it as a breeding animal. Amongst the methods used to frighten elephants in battle include covering pigs in oil and setting fire to them.

- There are no animals with very short memories. (Forfeit: Goldfish)

- Everyone has been to bed with a myoclonic jerk. It is that strange feeling you get when you sleep that you have just fallen. People think it comes from when we used to sleep in trees. It was a reflex so if you did drop out, you could grab the tree.

- The largest lake entirely in Canada is the Great Bear Lake. (Forfeit: Who cares?)

- Bott's dots are the Californian version of cats eyes.

- Before radar, large concrete dishes on the South Coast, a bit like giant ears, were used to detect when enemy aircraft where approaching Britain during World War II.

- Dates on films are given in Roman numerals so that it makes it harder to tell what year they were made. Early Hollywood film makers were worried that people would not see a film made only a few years ago, so they used the numerals, which before the year 2000 used all different kinds of numerals and made it more difficult to deciper.